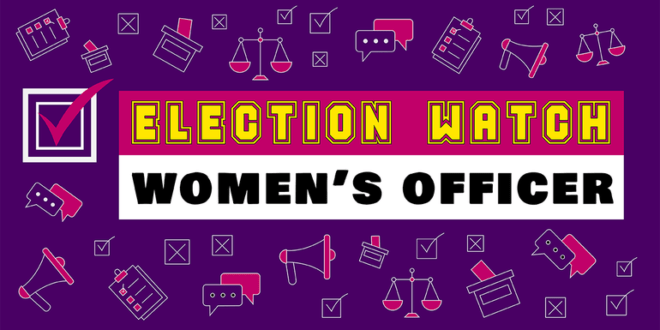 Women’s Officer at the SRC Elections 2021: meet your candidates

The 2021 SRC elections are in full swing, as a line of diverse women run for Women’s Officer.

Editor’s note: the headline of this article has been adjusted. The previous title did not accurately reflect the nature of this role, and inferred that Women’s Officer candidates were the only women running for a role in the SRC when this is not the case.

Even during these unprecedented times of online classes and social isolation, several gendered concerns have emerged throughout the year. Notably, the recent sexual harassment allegations in college and within campus in general.

This year, there are three nominations for Women’s Officer:

Get to know your nominees

I will continue working towards an SRC that takes a principled left-wing stand on major issues of politics and injustice, both on campus and in the wider world. Student unions of the past have been crucial to mobilising students to take a stand – whether on the Vietnam War, South African apartheid or more recently marriage equality. Our education is also under attack; it’s becoming more expensive and its quality deteriorating, while universities operate as businesses and do research for weapons companies. Young people can and must stand up for themselves and for the rights of others through collective action. I will spearhead an activist approach in the SRC to take up this challenge – anyone reading who’s interested in fighting for a better world should join me in this.

I’ve been involved in student unionism for a number of years. In 2018 and 2019, I was the National Union of Students Ethno-cultural Officer, organising protests on campus against the Islamophobic treatment of postgrad student Mohamed Kamer Nizamdeen, and for Palestine. I also led a protest when Scott Morrison came to office, and another in solidarity with Muslim community after the Christchurch Massacre. I have taken this activist approach to working in the SRC with the Education Collective – as well as LGBTI rights and pro-Palestine campaigning. In 2019, I was one of the organisers of the Cancel Trimesters campaign against a demanding and overloaded academic calendar, a campaign that mobilised 1000 students in protest.

Poverty is already an experience for many – and the cost of education only makes this worse. We need a fightback that draws in the majority against the rich minority. The issue at stake in this election is – will the SRC be part of that fightback, or will it stand in the way? That’s why students should vote for Left Action candidates like myself, not those associated with major political parties who want to be part of the system rather than fight it.

I want to make UNSW safer and more comfortable for its students, particularly, its female, female-identifying and non-binary students. Being a woman inarguably comes with many challenges – I hope to make those challenges fewer, at least for UNSW students. Part of this involves further support for these women in all capacities. I’d be satisfied with my achievements as Women’s Officer if by the end of my time on the SRC, UNSW female students (and staff) feel more supported and more comfortable on campus.

I have not been involved with SRC before as I am a first year, so this is my first campaign! However, throughout the year I have been heavily involved in student advocacy.

I think undoubtedly the greatest issue any UNSW student is facing currently is online learning. Teaching and learning online is no easy feat, and while certainly not unique to UNSW, I believe that our university can do much better in its online delivery of classes as well as access to resources and support. Outside of just online learning, a further issue that UNSW students have faced in 2021 is under support (unrelated to online learning). UNSW students have not had access to enough support across a range of issues that young people commonly face, such as mental health support, support in place for sexual harassment/abuse, learning support etc.

As part of the SRC, I’d like to uphold Spice Up’s policies of fee reduction, committed society support and campus rejuvenation. I’d like to support women’s societies and experiences to facilitate positive university experiences for all female-identifying and non-binaries students. This includes female-lead societies such as Women in Consulting and Women in Technology, and female-focused programs such as UNSW Founders New Wave and UNSW’s Pathways to Politics Program for Women.

I have not been involved in the SRC before. However, I have been very involved in the student community, through both attending and organising student events and programs. As part of UNSW Engineering Society’s Programs portfolio, I have helped run a peer mentoring program with over 200 engineering students, helping expose first years to all the opportunities available at university. I am also inmy second term of running EngSoc’s Volunteering Development Program. I have also been involved in a variety of student communities, such as the UNSW Founders New Wave, a program empowering and promoting female entrepreneurship, as well as UNSW Marketing Society’s Industry Mentoring Program.

COVID-19 has impacted the student experience like no other since the start of 2020. Especially in this second wave of lockdown that has persisted longer than our 2020 experience, intensified by political tension and vaccination debates, student morale and wellbeing has significantly decreased. Casually employed and international students are facing financial difficulties and food insecurity, while trying to manage university and other commitments such as raising a family. Especially in lockdown, the lines of study, work and childcare are blurred or often non-existent, which can negatively affect mental wellbeing. Other students are feeling demoralised with the feeling that most of their time at university will be online without making meaningful connections or experiences.

Elections will be held online in Week 4, from October 5th to October 8th. From Weeks 1-4, Tharunka will be covering the lead-up to the elections, including hosting debates with individual candidates in Week 3. If you are interested in watching the debate for Women’s Officer, check out our event here. To keep up with the action, follow us on Facebook or check our website.