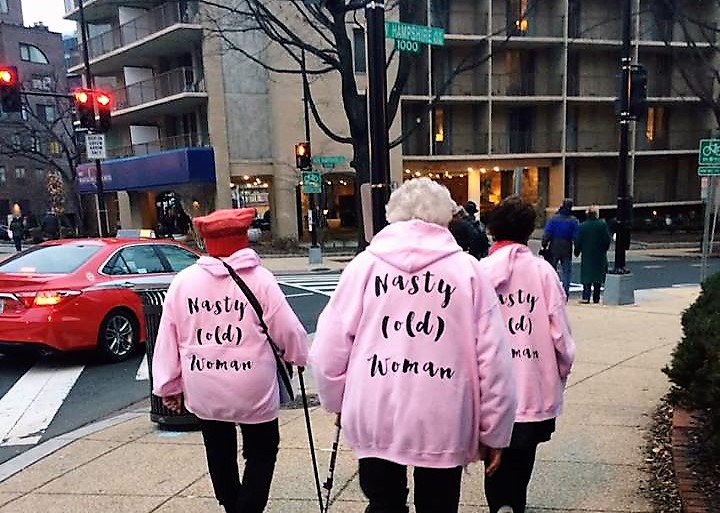 I was at the Women’s March on Washington

Yesterday morning, I was one of an estimated half a million people who peacefully protested in the streets at the Women’s March on Washington. There was a marked difference in the atmosphere from that of the day prior – one of hope, excitement and acceptance, rather than the hate, anger and intolerance perpetuated by newly inaugurated President Trump.

A stream of pink beanies flooded across the National Mall down to Independence Avenue, where I was greeted with an incredible sea of people. There was such a turnout that I could only just make out the top of the stage scaffolding in front of me.

I was surrounded by people of all backgrounds, genders, abilities and ages. There were toddlers mixed among the elderly, all with smiles plastered across their faces.

There were signs aplenty, – some cheekier than others – all with the same underlying message: women’s rights are human rights.

At the rally prior to the march, we heard from an inspiring collection of women (and men), who have been fighting to make change in their communities. Everyone emphasised the importance of continuing the fight for equality, and that people from all walks of life are accepted in the United States.

Most inspiring of all was actress, Ashley Judd, who burst onto the stage during Michael Moore’s speech with a guttural, “I am a naaaaasty woman!” Her appearance, reciting a piece by Tennessee teen, Nina Donovan, energised the crowd.

Early on, it became apparent that there was more than the predicted 200,000 people at the march, but this was confirmed when march-organisers had to announce last-minute plans to change the route for safety reasons.

That didn’t stop anyone though; soon enough, the Washington Monument and the surrounding streets were swamped with women and men chanting and cheering.

Yesterday,  the Women’s March on Washington reinforced that love can win, and kindness will always get you further than hostility.

The sombre mood lifted, and Washington was once again filled with friendly, accepting people, proud to be American, but aware that there is still a long way to go until this fight is over.

It was a pertinent reminder that women will not be relegated to talking about ‘women’s issues.’ We will continue to fight.

Previous UNSW women among 10,000 at Women’s March, Sydney
Next I am an Indigenous woman, and I want Australia to #ChangeTheDate