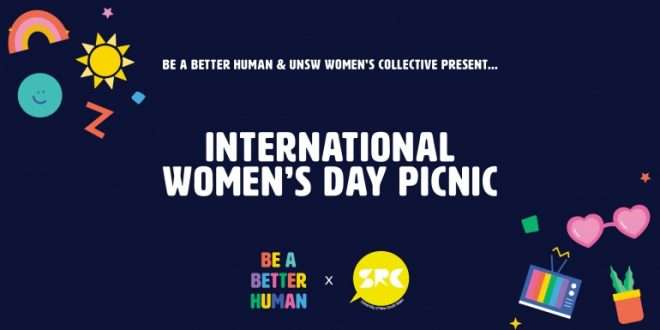 Despite the relentless weather, there was no stopping the Women’s Collective (WoCo) from uniting UNSW’s female-led societies to celebrate International Women’s Day last Tuesday.

The festivities were created in collaboration with the ‘Be A Better Human’ initiative, raising awareness of the accomplishments of women and gender equality. From crochet to kick boxing, attendees were welcome to try the diverse range of activities planned out and have a peek at what they might like.

As we all transition out of our coped up hibernation and on to campus life, events like these are the perfect occasion to bond with vastly different people and to discover new ways of having fun.

UNSW student Tina Roy said “We go about our lives, [with] our own priorities, studies and jobs. But then you take the time [and] I wouldn’t have met these people around the table if it weren’t for this [event] happening.”

For WoCo, the simple joy of organising meet-ups feels like a refreshing reset after an agonising hiatus away from face-to-face community interactions.

In an interview with WoCo Officer Aya Adel, she expressed the challenges of maintaining socially inclusive spaces during a period of decline in her collective’s engagement online. She believes that this has impeded the progress of feminist activism on campus.

“It’s a lot harder to get your voice heard when you’re not actually visible, in the physical sense.”

According to Adel, it has become more imperative now more than ever to rebuild and act on conversations about the deep intersectionalities of feminism.

This includes the overlap between gender inequality and racial discrimination. Nothing feels more demoralising or taunting than feeling like you’re a double minority in a space where the hope for correcting social injustices could exclude you.

Adel said: “When you do come from a non-Western background and you are a woman especially in Australia, you do feel that way……as a woman born in the Middle-East I do understand what it’s like to kind of be that minority group.”

WoCo’s eight official officers have stated their interest in organising more gatherings to elevate the voices of ethnocultural members.

Director of Publications, Rebecca Mattews, said: “I want to represent your ‘everyday woman’. Not just professional women, not women who seem to have it all….Feminism is more than Ruth Bader Ginsburg and Hillary Clinton…..There are so many complicated experiences that women have all the time that need to be represented, and not just be more refined for the media – to be raw and honest.”

Another attendee, Lucy Little, pointed out: “It is a day that should be focused on women, but at the same time I think in all areas it’s about spreading awareness and just promoting that inclusivity, and so that it doesn’t have to be a day that’s just segregated to women. Why can’t there be men around? Today is our day. But why aren’t they celebrating us?”