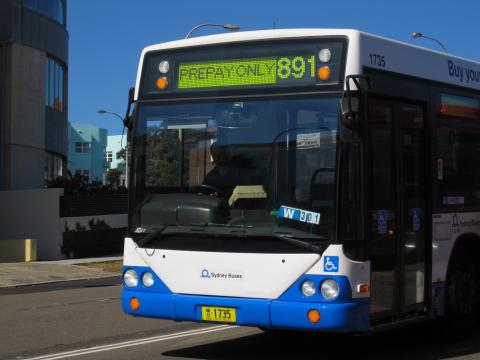 Will 891s Be Cancelled Once The Light Rail Is Built?

Construction of the South East Light Rail has meant mayhem for UNSW students relying on the public transport system to travel to and from campus, especially when it comes to the 891 bus lines. Hell, even Buzzfeed has covered the drama.

But amongst present day concerns about the 891, we haven’t heard anyone ask: Will the 891 express buses even continue to run once the Light Rail begins operation in 2019?

John Bellamy is the convenor of Save the Trees and Animals, whose current campaign is the Sydney Light Rail Action Group, and he’s calling on Vice Chancellor, Ian Jacobs, to answer exactly that.

In an email sent to Professor Jacobs on Monday morning, John wrote:

Some sources at the University have claimed that the University Express Buses are to be retained when the light rail begins operation, but we have yet to have that confirmed in writing. Transport for NSW have [sic] only said that they will work out the bus timetables closer to 2019. We have been asking Transport for NSW for the traffic modelling, cost/benefit analysis between current buses, electric buses and light rail, forecast journey times, and the number and maximum and operational capacity of the buses that will be replaced for the light rail, but so far no results.

Could you please confirm for us the University[‘s] current planning with regard to the University Express Buses? Will they be retained, or will they be cancelled when the light rail begins operations in 2019? We have had several student groups ask us if we know what is happening, but all we can go off is the Environmental Impact Statement and Transport for NSW saying we will work out the timetables later – in short, we don’t know. It would be great to get this cleared up once and for all.

We have also discovered that Transport for NSW have apparently not done a traffic study or modelling projection for the impact to traffic for the light rail. Do you know if the University or Randwick Council has done one, and, if so, where can we find it?

Did you also know that all of the remaining Fig Trees and Other Species trees on ANZAC [sic] Parade, Moore Park, and also some at the University are also still to be lopped, and root pruned? Are your students, staff and academics aware of the environmental destruction still to occur to these trees?

Please also find below cost/benefit analysis between Light Rail and the buses the Light Rail claims to replace. Please also see our latest press release. We are campaigning to Save The Trees, Save Our Buses, Save Jobs, Traffic Congestion, Save $1 billion, put the light rail underground, and finish the Eastern Suburbs Railway from Bondi Junction to Kingsford via Randwick and UNSW, which could be a better win win solution for all concerned.

We would be happy to come and meet with you and talk to you about what is exactly going on, as we have had many enquiries. We have contacted the UNSW Light Rail team, who have just referred us to Transport for NSW, who have not yet provided the specific information we are after. All Transport for NSW will say is that our information is wrong, but when we ask them for the correct information, they only give us some combined capacity figures from 7am-9am and say there is an increase of 10% from Kingsford and 30% from Randwick, but are still comparing operating capacity of buses to crush capacity of Light Rail. Perhaps you will be able to find out the answers we seek?

In further email correspondence with John, he stated that he wants Transport for NSW, UNSW, the state Government, ALTRAC or all of the above to supply the following information:

Whether we’ll get an answer on the future of our frenemy, the 891, remains to be seen. But if one thing’s clear, it’s that, so far, the Light Rail has been nothing more than one huge #LightFail for current UNSW students.

If you have further queries, or would like to get involved, John encourages you to contact him on (02) 8958 3783 or at SaveTheTreesAndAnimalsCampaign@gmail.com

Previous It’s 2017 and I Can’t Believe We’re Still… Pinning Our Hopes On Ethical Consumption
Next From a Centrelink Start-up Loan to a $500 UNSW Bookshop Loan: UNSW Responds to Trimester Concerns