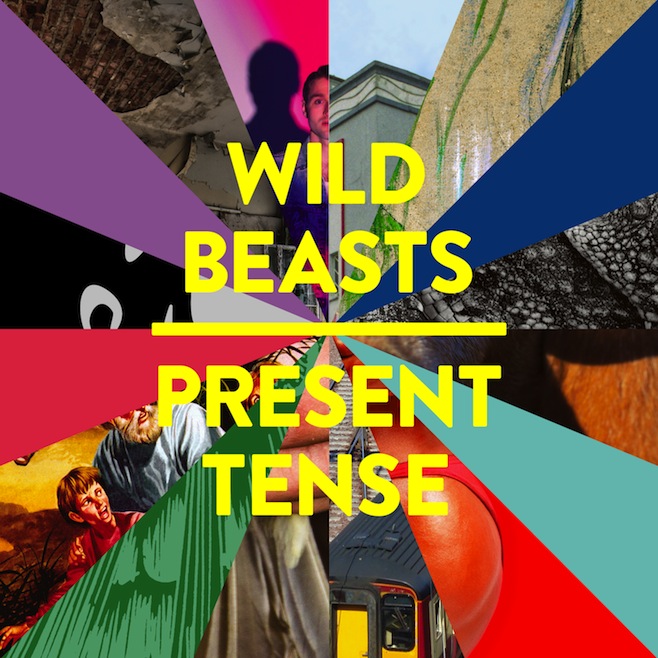 The sonic evolution of UK quartet Wild Beasts through previous albums, Limbo, Panto, Two Dancers and Smother, presents itself in its most complete form on Present Tense. Their fourth record, and one that’s essentially guitar-less, sees the band lose their raw musical drama in place of reflection upon post-millennial misery. The transformation from guitar band to electronica act coincides with the band’s movement from a selfish celebration of promiscuity, to a more frictionless, modern uneasiness with intimacy.

Wild Beasts have never struggled to be a band that stood out. Hayden Thorpe’s polarising falsetto is reined in a little on this full length, but even so, it would never be the case that Wild Beasts’ approach could be confused with anyone else. They’ve always tended to side with the have-nots. In the opening track, “Wanderlust”, Thorpe sneers at the lower class: “Don’t confuse me with someone who gives a fuck”. They’ve arrived from three previous albums of debauchery and self-flagellation to see a modern world they’re disgusted with. It isn’t in the vein of “Common People”, ranting about rich kids’ fetishisation with originality, but it’s rather lamenting those “solemn in their wealth”, compared to the protagonists who are “high on our poverty”.

“Nature Boy”, the album’s second track, sees Thorpe’s alto Tom Fleming take the lead role. His sleek, honeyed lower registers are visited regularly. “Nature Boy” is a wild young man ready to take your woman – and your white-collar, banking-sector ass can’t even imagine how much she’s into it. Class struggle features again on the track “Daughters”, this time with bloody revolution and “pretty children sharpening their blades”.

Present Tense isn’t just thematically more dense and foreboding than previous albums, Smother and Two Dancers. The band’s use of synthesisers is soft and welcoming in some places, but lo-fi and gloomy in others. Drummer Chris Talbot has probably never played an actual rock beat – something that doesn’t change on this album either. His hollow, lingering technique on “A Dog’s Life” is his shining moment of the album. It genuinely feels like the kit is deflating – the passing of the dog actually sucking the punch from the percussion.

“A Simple Beautiful Truth” is the album’s pop offering, with Thorpe’s voice tandeming Fleming’s gruff to create the obvious candidate for their next 12-inch. Despondent, melancholic ambiance underlines Fleming’s and Thorpe’s powerful stories, none hitting harder than the death of a dog in “A Dog’s Life”: “Throw a ball up into space.”

Final track “Palace” is perhaps Wild Beasts’ first and only genuine love song. Finishing the futility in “Wanderlust”, Thorpe wraps the album up with: “Baby there’s have alls and there are have nots/ I’m happy with what I got.”

No one else could make an album like this, and we’re lucky Wild Beasts didn’t chicken out of this brutally honest, arresting and politically charged account of our times. They aren’t looking to offer solutions or answers, just experience. Thorpe and Fleming are open to their emotions, dejection and frustration in Wild Beasts’ most complete, intelligent and profound album to date.