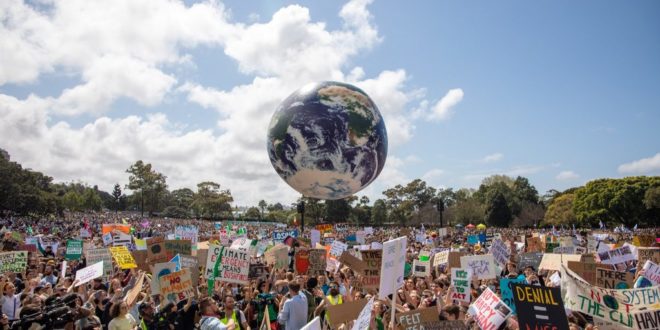 Opinion: We need to protest COP26

by Gina Elias and Anna Ho

On November 6th, tens of thousands of people around the world are expected to protest the next Conference of Parties (COP26) held in Glasgow where the world’s most powerful governments will be gathering to supposedly plan serious climate action. Gina and Anna explain why all students should join the Sydney protest this Saturday.

Climate activists from Glasgow itself to London, Paris and Kyoto will be rallying to demand real climate action as part of a global day of action.

Here in Australia, Uni Students for Climate Justice (USCJ) will hold our own major mobilisations on the streets on the same day, Saturday November 6, all around the country, in Sydney, Melbourne and Brisbane.

The Sydney protest is being organised by a wide range of climate activist groups, and a UNSW contingent hosted by the UNSW Environment Collective and USCJ UNSW.

The COP26 Global Day of Action is our chance to put climate activism back on the agenda after decades of “blah blah blah” from the rich and powerful. As teen climate striker Greta Thunberg put it in Milan, “Build back better. Blah, blah, blah. Green economy. Blah, blah, blah. Net zero by 2050. Blah, blah, blah. This is all we hear from our so-called leaders … Our hopes and ambitions drown in their empty promises.”

What is COP26, and what’s this Paris Agreement I keep hearing about?

COP26 is the sixteenth meeting of governments to the Kyoto Protocol hosted by the United Nations (UN), and their third meeting to the Paris Agreement.

The Paris Agreement is an international treaty signed in 2015, with the goal of keeping global temperatures below 2 degrees. This goal itself is legally binding, but to actually achieve it, governments must set their own non-binding national targets to cut greenhouse gas emissions. This year, all parties are required to commit to more ambitious targets.

However, based on all global targets, Australia is actually set to increase our emissions by 16%.

Why are we protesting against COP26?

COP26 brings together the world’s richest and most powerful governments and corporations. While the conference claims to be about climate action, in reality, it is a public demonstration of greenwashing. Those most responsible for worsening the climate crisis promise distant empty targets as if they are part of the solution when they are the problem.

The key promise of COP26 is to achieve net zero emissions by 2050. Though some have complained 2050 is too far off, and it is, even closer targets would be meaningless.

The problem is with the whole “net” zero goal itself. Setting net zero targets by 2050 is the new climate denialism. Net zero does not mean zero emissions. It is a deliberate shifting of the goal posts from an aim of cutting fossil fuels to the idea that emissions can just be offset with all kinds of dodgy accounting tricks.

This is why all the biggest fossil fuel corporations have committed to net zero targets, often on the same day as they have opened new coal mines, gas pipelines or oil drilling. Shell and BP are among hundreds of corporations that have net zero targets. Our own Liberal energy minister Angus Taylor was most honest about what net zero really means in his address to a business forum on October 12, stating that “the difference between net zero emissions and zero emissions was so significant it could allow traditional industries to prosper.”

By traditional industries, the Liberals mean liquid natural gas (LNG), one of the key sources of Australia’s huge rise in carbon emissions, as well as coal.

You also only need to look at who is attending COP26 to get a look into what this summit is really about. A recently confirmed attendee is our own coal-fondling Prime Minister Scott Morrison who jetted off to Hawaii during catastrophic bushfires, is overseeing a gas-fired recovery, approved the Adani coal mine and four new coal projects only this month. US President Joe Biden of the Paris Climate Accords and “green revolution” who is also attending has actually ramped up oil and gas permits. Biden has approved over 2,400 drilling permits since the start of his first term.

Then there is the British Tory Prime Minister Boris Johnson who is running the conference. Though Boris Johnson also claims to be moving us towards a green future, with promises of “carbon neutrality” (not zero carbon emissions), he has not only refused to shut down existing sources of CO2 from the fossil fuel industry, but is currently expanding them. Johnson has approved a new mega coking coal mine in the Cumbria region which would produce 9 million tonnes of carbon emissions per year, according to the Green Alliance. That doesn’t even include emissions from the extraction process. Johnson has also permitted oil drilling and fracking for gas in the North Sea. According to Greenpeace, these new oil and gas licenses would “release up to 5.7 gigatonnes of CO2 emissions when burned,” the equivalent of 25 Cumbria coal mines.

Not only are the biggest emitters in government attending, but also known fossil fuel corporations. Many have been outraged that the Adani corporation is currently constructing Australia’s biggest (and most hated) coal mine, among other fossil fuel projects, now plans to attend.

COP26 has a whole host of corporate sponsors who are neck-deep in environmental destruction. For example, one of the top sponsors is the food company Reckitt, which has unveiled its plans to meet the Paris climate agreement targets by 2030 in partnership with the UK government. But Reckitt is steeped in palm oil production which causes mass deforestation. Reckitt uses more than 134,000 tonnes of palm oil products to make its food goods every year.

How is Australia contributing to climate change?

Australia is the world’s third biggest exporter of fossil fuels behind only Saudi Arabia and Russia. This means that we need to be deeply skeptical of Scott Morrison’s most recent ‘net zero emissions by 2050’ plan. For one thing, there are no intentions to change our 2030 targets, and the science is clear that any net zero target without a clear plan to cut emissions within the next decade is simply hot air.

All signs point to Australia committing to increasing emissions. Scott Morrison’s post-COVID-19 economic recovery plan is powered by gas, with business advisors calling for a $6 billion investment into gas expansion. Weeks before COP26, federal environment minister Sussan Ley approved three new coal projects in one month. These crimes are not unique to the Liberal Party either – the Andrews’ Victorian Labor government approved new gas extraction projects not 5km away from the Twelve Apostles in August, and Labor’s Palaszczuk government in Queensland are responsible for greenlighting the Adani coal mine.

It’s important to resist the lies our governments have used to justify these projects.

For example, when Ley approved an extension of Mangoola mine, she stated that there was ‘no reason to believe that a comparable amount of coal would not be consumed in substitution of the proposed action’s coal’. When translated from bullshit to English, this means, ‘if coal is not mined in Mangoola, it will be mined somewhere else.’

Not only are many countries publicly distancing themselves from new coal production, but this sort of statement is part of a Liberal tactic which places the blame of responsibility of the climate crisis on developing countries which are still increasing their carbon emissions, as though Australia is not the world’s second largest exporter of coal.

Scott Morrison has also claimed that Australia’s greenhouse gas emissions are 20% lower since 2005. This is a greatly contrived figure: using accounting rules which govern international emissions calculations, Australia can claim ‘carry over credits’ because we ‘overshot’ our first Kyoto climate target in 2012, provided an allowance to increase our emissions by 8%. In reality, our fossil fuel emissions, not counting those linked to land or agriculture, have increased by 7% prior to 2020.

Why you should protest with us on November 6

Every recent scientific report has made clear that we need a rapid shutdown of fossil fuels and a move towards renewable sources of power. The problem is not that there is any shortage in knowledge of the problem at hand or in renewable energy sources – these are all abundant. Nor is climate action unpopular among ordinary people. Australia Institute’s Climate & Energy Program this year polled that not only are 75% of Australians concerned about climate change, but also 82% support the phase-out of coal fired power stations. In the 2021 Lowy institute survey, 63% support reducing Australia’s coal exports, which is the biggest source of carbon emissions.

The key barrier to real action on climate change is the world’s political and economic elite. The world’s corporations and governments profit from the destruction of the planet. If we are to win a world liveable for all of us that isn’t in the throes of climate disaster, we will have to fight the rich and powerful. Thankfully, millions of people around the world want climate action. It is up to all of us to mobilise and disrupt the system.

Though there is no hope for us in climate summits, we should have hope in the millions of people around the world who do want to put our planet above profit. Australia’s biggest protests in recent history have been around the climate crisis. In 2019 and 2021, thousands joined climate strikes organised by high schoolers. In 2020, Uni Students for Climate Justice called a rally to ‘Sack Scomo and Fund the Firies’ in response to the catastrophic bush fires in Sydney which drew 80,000 people. This year rail, sanitation workers and school staff in Scotland even plan to strike for a week during COP26, with rail workers planning to target the trains transporting COP26 guests from Edinburgh to Glasgow! This is the power that we need on our side if we are to put up a real challenge to the twisted priorities of this system.

On November 6th, we will be joining people around the world to protest for real climate action and to call out the greenwashing of this climate summit.

In Sydney, we will be rallying at Hyde Park North at 12pm on Saturday November 6. Join us!

Gina Elias – I’m an activist in Uni Students for Climate Justice (USCJ) on and off UNSW campus. USCJ was founded in 2019 in Sydney and across Australia to organise mass action and make the demands necessary for genuine climate action. We are for shutting down the fossil fuel industry and making the rich pay for a just transition to renewable power. We were part of building uni student contingents to the global climate strikes in 2019. We are most known for having called protests of up to 80,000 in Sydney in January 2020 to ‘Sack Scomo and Fund the Firies’ in response to the horrific bushfires on the East Coast, and since then have continued to organise activism at every opportunity, from the gas-fired recovery to the recent student climate strikes in May this year.

Anna Ho – I am the current SRC Environment Officer, and the convenor of the UNSW Environment Collective. We are an anti-capitalist and anti-colonial student activist group on campus which focuses on mobilizing UNSW students for large scale climate action e.g., student climate strikes, and political education. This year, we have worked to build student contingents to the May 21 and October 15 climate strikes, campaigned around government austerity, and stood in solidarity with frontline communities e.g., the local campaign to stop the expansion of the Tahmoor mine in Bargo.

Share
Previous What is the deal with the COP26 and Australia ‘going net zero’?
Next Are students in support of UNSW’s nuclear education program?