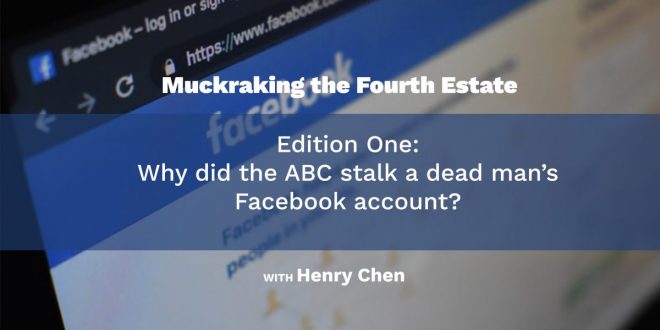 This article forms part of a fortnightly series, Muckraking the Fourth Estate. In this series, we investigate the legal and ethical consequences of historical media scandals, in an effort to better understand the unspoken rules governing the news we see.

A former US marine, Jay Schwer, suffers a serious head injury in a motorcycle accident. A year later, he dies of a drug overdose. His estranged wife, Nicole White, wants his money. His girlfriend at the time of death, Katrina Radford, goes to court to stop her, claiming he made a will before he died.

Two days after the judgment, ABC journalist Matt Wordsworth publishes an article entitled ‘Will by video ruled valid in Supreme Court after challenge by estranged wife.’ The header photo on the article is an image of Schwer and his girlfriend, smiling against a black background, with an unclothed baby in their arms. This photo was taken from Katrina Radford’s personal Facebook profile. The article caption cites the source as ‘Facebook’, and fails to credit Radford herself, which may indicate that the ABC breached Radford’s copyright.

But we can go much further. If a journalist managed to find the parties’ Facebook profiles, then anyone can. In fact, the personal Facebook profiles of Jay Schwer (who is now deceased) and Nicole White (who lost the case) are still accessible by anyone online at this moment, 8 months after the judgment was handed down. It’s downright creepy to see images of the children in the case, and to read through comments detailing the parties’ family drama. And all of this would have been directly before the eyes of the journalist who went looking for the photograph.

In fairness, all this content is public, so it’s difficult to describe this saga as an invasion of privacy by the media. Yet the whole affair is self-evidently disturbing. Without access to the ABC’s internal figures, it’s hard to say how many people read or saw the story. But the ABC Facebook post promoting this story received over two thousand reactions.

There’s a second point here, about how the journalistic sausage is put together. Nearly half the sentences in Wordsworth’s article have been copied, word-for-word, from Justice David Jackson’s written judgment. There is not a single unit of new information in the article. Every quote and every substantive detail comes from the judgment. Granted, plagiarism is not an issue here. Court reporting often demands stultified writing, so that the factual account can be irreproachable.

Instead, my concern is about the journalistic process. I don’t know whether Matt Wordsworth reached out to the Schwer family, or whether he watched the court hearing in person. But the article contains no evidence that he did either of these things, and the fact that the photograph was not attributed to Radford further points in this direction. Crucially, every single line in the article could have been written without talking to another human being.

Out there in the real world, professional journalists ride roughshod over the people featured in their stories. They blithely take documents on the public record and weave them into narratives. To put it bluntly, this is all it takes. The Schwer story demanded neither compassionate interviewing, nor the making of savvy judgement calls. It could have been written entirely from one’s computer. And these days, everyone has a computer. So what are journalists for?

It goes without saying that these news gathering techniques are ethically suspect. And yet they were used by a respected journalist working for a respected public broadcaster, and they are almost certainly being used right now. If that doesn’t convince you to check your Facebook privacy settings, I don’t know what will.

Henry is a third year student interested in law, media and tech. He’s got more writing on these topics at The Schadenfreude Blog, and can be found on Twitter at @hcnyre. He’s also producing UNSW Med Revue 2020, so if you’re into musical theatre, send a DM and get involved!

Share
Previous Ranking the greatest Foundation Day pranks by how many laws they broke.
Next Climate change debate erupts at Anzac Parade Light Rail grand opening after monster waves crash against the train.