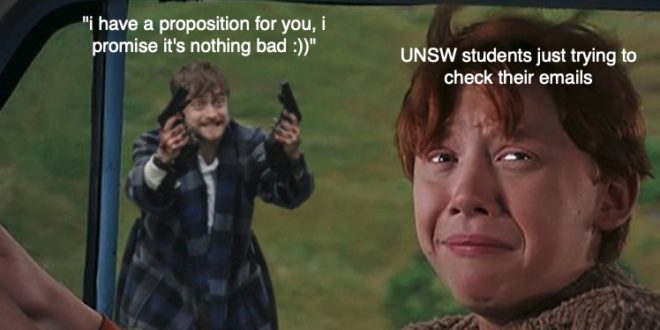 Who is Amelia? The mysterious case of the UNSW Discussion Group ‘catfish’

On Saturday the 3rd of July, an explosive UNSW Discussion Group post documented an unnerving exchange between a male undergraduate student and a catfish who called themself ‘Amelia.’ Comments from other students who had been contacted by the same catfish soon came flooding in. We reached out to 5 of the targeted individuals to shine a light on the situation.

For the purposes of clarity, we will be referring to Amelia as ‘she’ throughout this article, however their identity is unknown.

The exchanges all began in the same, eerily familiar manner, with Amelia cautiously inquiring whether or not she had found the right guy after offering a few personal descriptors. Some were purely physical, such as those she described as ‘the young greek guy with the nose and ear piercing’ or ‘the white guy with kinda long hair,’ but others included an unsettling level of detail. She referred to students’ high schools, hobbies, their general demeanour and even recent changes in their personal appearance. She told each of them that she had a ‘proposition’ which she would reveal once they began chatting on an alternate platform, assuring them that it was ‘nothing bad.’

Her initial messages gave off the impression that she’d innocently noticed them around campus yet had been too shy in the moment to approach them, making her resort to email to declare her feelings for them. She introduced herself as a postgraduate student at UNSW, her faculty differing from case to case. This approach was somewhat effective; one student said he felt she had “basically guilt tripped” him into handing over his Gmail by sounding like an “introverted girl with a crush on me.”

The level of information she approached each student with suggested that she’d known them, or at least known of them, on a personal level. Some were convinced that she’d had to have seen them in person or known them somehow, such was the level of knowledge she displayed.

However, when students asked her how she knew them, she gave vague answers that suggested she’d seen them around, or perhaps knew of them through a mutual friend. One reported, “I still don’t really know how she found me, from what I remember she said that she’d just seen me around uni a few times and had asked for my name from someone I was with.” When asked how she’d found their emails, she told them she’d simply filled in the blanks of the ‘firstname.lastname@unsw.edu.au’ format.

Despite her messages showing what one described as a “scary level of familiarity,” all of the information she used in the messages had been publicly available on the students’ social media pages. It appears that Amelia stalked the students’ social media profiles before constructing her emails to them, to make it seem as though she was a fellow student who had seen them around.

After these initial email exchanges, she attempted to get their Gmail accounts so she could talk with them over Google hangouts, a platform which allowed her to continue messaging them whilst maintaining her anonymity. When some asked the obvious question – why not just contact me over Facebook? – she gave a variety of reasons, telling some that she simply didn’t have it, and others excuses to the effect of “keeping her identity secret was what she was into … she got off on the mystery of it.”

It seems that Amelia used a combination of a shy persona, compliments and perceived personal knowledge to disarm the students, and persuade them to let their guard down. However, this initial innocence faded away as her conversations progressed, becoming increasingly more sexual and demanding over the course of the chats.

Once their conversations progressed into alternate messaging platforms, she propositioned them for a range of sexual acts. These included casual sex, or ‘cougaring’ as she put it, paid ‘modelling,’ and offers to exchange pictures with a promise of a “friends with benefits situation” if things “worked out.” The ‘paid modelling’ included a request for foot pictures, after she admitted, ‘I just have a bit of a foot fetish.’

Amelia offered to pay for this ‘modelling’ through PayPal, bank transfers or gift cards.

When asked to comment, one student described her as “pretty aggressive,” noting that they felt bad for “anyone who may have actually gotten involved with her.” Another documented Amelia getting increasingly frustrated and desperate upon him asking for verification of ‘her’ identity.

Amelia also sent photos of ‘herself’ to at least two of the students, in attempts to convince them of her identity and entice them into agreeing to her requests. As it turns out, these pictures were actually of a young female lawyer. This was confirmed by her colleague, an ex-UNSW-student who requested her photos be taken down from the UNSW Discussion Group post.

Between Amelia’s contradictory degree specialisations and use of another woman’s photos as ‘her’ own, it is clear that she isn’t who she says she is. Due to her secrecy and insistence on keeping things anonymous through emails and Google Hangouts chats, the true identity of Amelia remains unknown.

However, one of the students’ conversations unearthed some clues about her true identity. Their conversation had become increasingly heated due to Amelia’s desperation and the student’s irritation. The student finally snapped at Amelia, saying “you’d know cause you’re a fucking man,” to which Amelia replied, ‘fine, you got me.’

Following this exchange, we can conclude that Amelia is likely a man who’d been using a young woman’s pictures to catfish the students.

Amelia’s affiliation with UNSW is still unclear, as is ‘her’ method for selecting her targets. Some of the students believe that they’d simply been found through their Facebook profiles, and perhaps even through the UNSW Discussion Group.

By consulting with some of the students that Amelia had approached, we found that she’d used 3 different emails to contact them. When we attempted to reach out to each of these emails, they all bounced, suggesting that the catfish likely deactivated or deleted those accounts. It is unclear whether she did this after she was exposed on the UNSW Discussion Group, or if she has simply moved on to a new email.

We also don’t know whether or not Amelia has been successful in attaining explicit pictures from any UNSW students, or how many students she has contacted so far. Judging by the comments under the original UNSW Discussion Group post alone, she has reached out to at least 8 students, the earliest encounter occurring in August 2019. Given how long she has been contacting students, there are likely more instances that have gone unreported.

It is also up to speculation whether or not ‘Amelia’ is just one person, or what their true intentions are in getting these pictures. Is it simply the case of one lonely individual trying to extract sexual gratification from unsuspecting UNSW students, or something larger and more sinister?

Either way, the whole situation is undeniably strange, and there are still many questions left to be answered.

If you have any further information that could help us solve this mystery, please email us at tharunka@arc.unsw.edu.au, or leave us an anonymous tip.

Share
Previous Australian radio host fails to apologise for advocating to drop nuclear bomb on China amidst laughter
Next Opinion: the two-faced insincerity of Corporate Pride