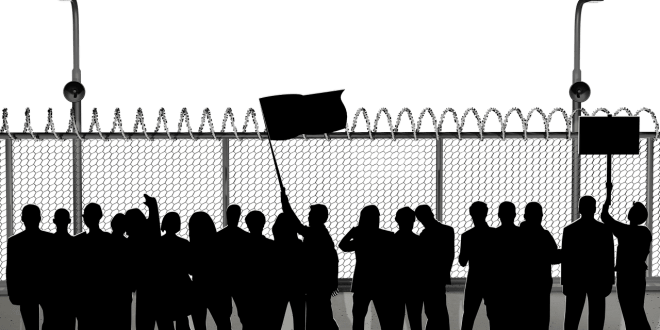 by Humans of Hong Kong

The telescreen blinks in sync with the flickering street lamp outside. Sitting on the couch, I watched the News. A man – recognised as 07210, who was injured from a bloodshed and helped reporting to the police last year – was arrested for organising it.

There seemed to be rumours that the police colluded with the mobs, neglecting ten thousand urgent hotline calls during the slaying, but this was never spoken on the News, thrown down the incineration chute with all the other dissidence. Anyway. We’ve evolved to accept forgetting, negligence and loopholes, too, as necessary components of Truth.

I light a cigarette. The smell of bitter almonds from the kitchen drifts heavily in the smoke. Pungent. Puncturing. It is all coming back now. The smell of cyanide from tens of thousands of tear gas canisters piercing into the larynx, burning, tearing open to break out the screams of agony. Live rounds shot three centimetres from a beating heart (or was it just near the shoulder as the News said?). Another gasp followed by a loud grunt. A reporter next to me fell, covering her right eye, blood gushing out and seeping between her fingers.

A first aider rushed to her, but realised too late.  He was thrown into the air by a water cannon.

Batons swinging onto peeling flesh. Skulls cracking in the distance. Viscous blood oozing out with cerebral fluid. People lay prone in this dark red pool, their necks kneeled on, their hands and legs handcuffed to their backs, and hauled a few metres across the street.

The lamp outside continues to flicker. More memories fleet by. Like rogue bulldogs, they were drooling at the sight of young girls and women, flexing their tags, labelled by their master, and the bottles of pepper spray are their empowerment and identity. Goading the literate, mocking the educated. Racing to legally abuse anyone with every opportunity they have. Lavishing the idea of Metamorphosis, diminishing what it means to be human as they repetitively stomp on the heads of those fallen bodies. And, of course, diminishing the purpose of fighting as one. All for the sake of a nation’s security and peace.

And where have the people gone? The stripped girl drowning in her muffled cries; the ever-changing injury count in that bloodshed –  we’ll never know how many were injured, whether someone died; the detained youths by the dozens undergoing living hell; the bookshop owner down on Leis Street; that neighbour who snitched on her own son.

I must be damned. The smoke must be warping my mind. But there were putrefied, dead bodies from high above, from the sea below, whilst white handkerchiefs covered our mouths. Tightening. Choking. Suffocating. Us. Until there is only Stillness.

With one more flicker, the lamp burns out.

Turning on my flashlight, I open the front door and walk towards the streetlamp.

Shining the flashlight towards it, I squint, I freeze.

There on the curvature of the lamp spreads a myriad of red-eyed lenses, bulging, zooming in and out with a soft, incessant buzz.

Share
Previous Hidden Ghosts: The Murder of Transgender People in Australia
Next Closer