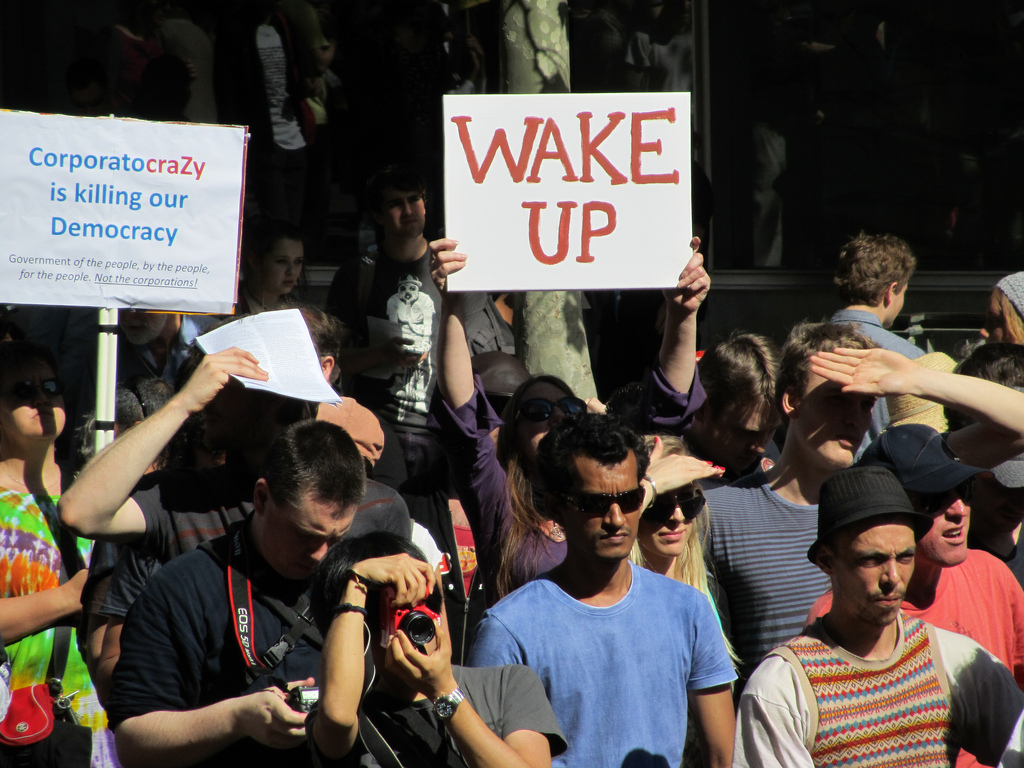 Whatever Happened To Occupy Sydney?

They came, they occupied, they were dispersed and now they are fighting legal cases on a score of fronts.

Occupy Sydney might not have fired public imagination like its counterparts in recession-ridden cities across the United States and Europe, but in its bid to highlight corporate greed, the movement has simultaneously raised troubling concerns about civil liberties, the right to protest and what constitutes the appropriate use of police powers.

Well into its fourth month, the persistent conflicts between police and protestors are now beginning to receive scrutiny from the courts as well as politicians. The police have been criticised by a number of councillors for their behaviour toward the Occupiers.

Irene Doutney, City of Sydney Greens Councillor said, “The police are overreacting in a huge way.”

“I think the whole thing has been really, really disturbing and it’s part of a greater movement by the police to stop dissent of any sort,” she said. “There is a general fear among the establishment, or what the Occupiers are calling the one per cent, of the uprisings which have happened across the world and the demonstrations across Europe.” Alex Steel, Associate Professor of Law at the University of New South Wales, also challenges the Australian’s current legal framework in relation to protesting and police power, “A test of a democratic society is how it balances the need for order with the need to permit freedom of expression and association. If the reports of police actions against the Occupy protesters are correct, there are real worries that police have a wrong understanding of where that balance lies. Getting the balance right is made more difficult by the lack of any clear Bill of Rights in our Constitution,” he said.

Such reports have indeed been concerning. On October 19, four people were arrested by police for allegedly stealing milk and bread crates. The defendants pleaded guilty but the judge let them go without recording a conviction. Kathryn Ticehurst, PhD student at the University of Sydney, who was present during the case, stated “the judge said it was one of the most trivial cases he’d ever seen in the court and he could understand the difficulty of finding seating in the metropolitan area.”

On November 23 2011 three Occupy Sydney protesters were arrested and charged with trespass when they sheltered from the rain under the eaves of the Reserve Bank of Australia. One protester told Alternative Media Group of Australia that after the RBA complained to the police, they were told to move along, but refused to, considering they were not protesting but merely seeking shelter from the rain.

Darren Bloomfield, one of the men charged with trespass said, “They charged us with the Enclosed Land Act, which was ridiculous to start with because it wasn’t enclosed land. It was a walkway. In the end, when my case was finally heard, the police didn’t bother turning up. They filed to quit and didn’t pursue it any further. The Aboriginal Legal Service lawyers who represented me asked for the court costs which they were awarded.”

He said the other two men with whom he was arrested were let out of the holding cell after the four hours of holding but he was refused bail and spent the night in gaol. “To be honest, I’m feeling a little bit disillusioned with the system. When you can get arrested and refused bail for that sort of thing, it’s certainly a bit of a worry.”

Bloomfield’s detention was particularly troubling given the issues it raised about racialised treatment in the criminal justice system. Cr Doutney said, “I think it’s highly concerning that, of all the people arrested, only the Aboriginal man was made to spend the night in gaol. I think we’re seeing a certain amount of discrimination here.”

Due to being detained overnight, Mr Bloomfield was unable to make it to his job the following day.

“I basically lost my job over it all and I haven’t been able to find any work since. I’ll be following that up and looking for ways to get compensation,” he said. “The main thing police have been charging people at Occupy with is camping. Right from the beginning, the police have targeted any type of shelter or means to make the protest more sustainable. They have been targeting sleep, waking people up at five in the morning,” she said.

“At the moment they come about nine or ten at night, take photographs and describe everyone and doing the same thing at six in the morning. If people are found to be there at both times, they are being charged with staying overnight. They’ve targeted cooking and said that our food preparation was dangerous. The milk crates in question were being used for structures. I think that’s why they went for those people: not because they cared about the crates themselves.”

She said, “There is a significant High Court challenge pending currently for Melbourne and Sydney in regard to the potential abuse and misuse of police power when dealing with the Occupy movements.”

While the majority of those charged over the camping infringement have been waiting for the High Court date to have their cases heard, some have taken their defence straight to the local court in Sydney. One man, only known as Lanz, won his case recently after the judge ruled that without a structure such as a tent or van, sleeping in the street does not technically count as camping. Police moving powers are the real issue.”

A number of protesters have been arrested over the course of the occupation for assaulting police officers. Cr Doutney stated that she felt these were “trumped up charges.” She said, “Resisting arrest and assaulting police are two standard methods used to repress people. I’ve had so many complaints from people who were just protecting themselves against officers standing a centimetre from their face and then immediately being charged with assault. They seem to me like sweep charges for arresting protesters.”

An ALP member of Sydney City Council, Dr Meredith Burgmann, said she was shocked by the “constant police harassment” of the Occupy protesters. “I passed them today and they are polite, unobtrusive and an interesting part of what’s going on in our great city. They have a really important point to make and are demonstrating peacefully, which I think they have a right to be able to continue with,” she said.

After requesting a police comment on the matters raised, David Rose of the Police Media Office said in an email that he was “unable to provide any comment regarding the matters you raised.”