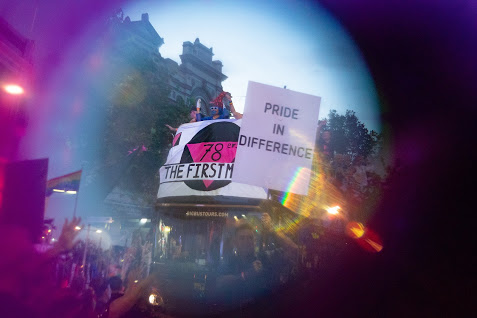 What Are We Marching For?

On 24 June 1978, a small group of people known as the Gay Solidarity Group marched through the streets of Darlinghurst to commemorate the anniversary of the Stonewall Riots. Homosexuality would not be made legal in Australia for another 26 years. Yet the group submitted their permit, put on their most fabulous outfit and banded together blasting music down the streets with the hope that the love and acceptance they felt for each other could one day be shared with the world.

But on this cold night in Darlinghurst, despite permits and peaceful protest, police descended onto the group brutally beating and arresting those who attended. The Sydney Morning Herald later posted the names of those detained in their newspaper causing many to lose their jobs, their housing, their families and in many cases jeopardising their safety.

Fiona Almond was just 19 when she was beaten and arrested by the police that day, and she has marched every year since for those who are no longer here to march alongside her. Now 61, Fiona knows all too well the historical importance of Mardi Gras. Speaking of the trauma she endured at the hand of the police that day she said:

“I just want them to say sorry.”

Knowing the origins of Mardi Gras and its brutal history, it is hard to imagine that the event could now be morphed into an annual televised parade. The festival itself runs for two weeks and generates over $7 million in revenue for the organisation alone.

In the lead, up to Mardi Gras, my newsfeed was filled with brands advertising their latest rainbow-filled product offering. It’s as if I would somehow race to cover myself in rainbows and glitter to show the world how queer I am. Brands like Bonds, Levis, Vans and yes even Chatime filled their social media feeds to showcase their solidarity with the community. But where are these brands the other 50 weeks of the year?

Visibility and the right to take up space are critical aspects of the fight for diversity. Yet last week the parade’s space was notably taken up with floats from sponsors like ANZ, Vodaphone, KissFM and Instagram – prompting the question of, ‘but why tho?’

Perhaps the most concerning presence was that of the police. When protesters attempted to block the official Liberal Party float, they found themselves forcibly removed. Police later made a statement expressing their disappointment at the protestors for not adhering to the true spirit of Mardi Gras.

Somehow, the police failed to see how protesting the presence of a political party whose leader is currently campaigning for the religious discrimination bill and who chose to leave the room during the parliamentary vote for same-sex marriage, is precisely on point with the spirit of Mardi Gras.

For years, marginalised groups have been fighting for their right to exist within a society which continues to deny their basic human rights. Now, those who had previously hidden in the shadows are faced with a world where drag queens have their own TV show, gay men give makeovers to straight men, and words like Yaaaasss, born from AAVE and ballroom culture are now consumed and replicated through the mainstream.

The extraction and replication of characteristics from marginalised cultures remove the history and diversity from their origin, making them seem uniform. Many feel as though this newfound visibility of queer is fostering a sense of acceptance and is a step forward for LGBTQI+ rights.

However, there is a significant difference between tolerance and acceptance. For many, the images and characteristics of Mardi Gras perpetuate a one-dimensional stereotype of what it means to be queer and remove the history and significance of the event.

Mardi Gras creates a space for people and brands to engage with the queer community, but most will pack away the rainbows just as fast as they brought them out while we still fight to gain access to housing, health care and employment. So why are we creating space for people who have no intention of showing up the other 50 weeks of the year?

For many people, every day is a march. What are you doing to march with them?

Share
Previous Fossil Free: Statement on UNSW Divestment
Next Eye Spy: A Look into Transport Mobility for People Who Are Blind