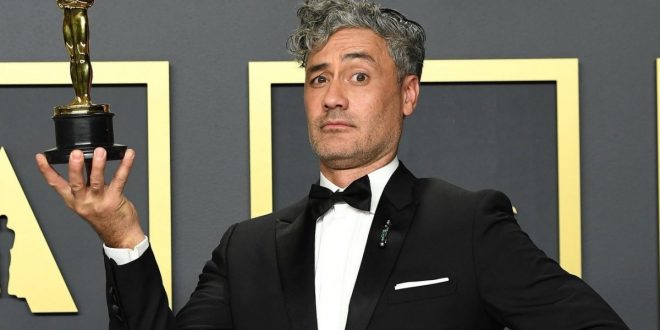 “We are the original storytellers”: Taika Waititi’s Oscar Win

Taika Waititi has been making waves in the film industry for years, and I for one was completely unsurprised that he walked away with an Oscar last month. Waititi is an actor, director, screenwriter, and producer best known for Hunt for the Wilderpeople, What We Do in the Shadows, and Thor: Ragnarok. As a Wiradjuri writer, I hold a lot of respect for Taika Waititi’s oeuvre, and I was elated when he recently won Best Adapted Screenplay for his film Jojo Rabbit, making him the first Maōri person to ever win an Oscar. Based on Christine Leunens’ novel Caging Skies, Jojo Rabbit is about Jojo (Roman Griffin Davis), a young member of the Hitler Youth living in the later years of World War II, who discovers his mother (Scarlett Johansson) is concealing a Jewish girl (Thomasin McKenzie) from the Nazis. Waititi also plays Jojo’s imaginary friend Adolf, a childish construction of Adolf Hitler.

Of course, Waititi didn’t make the film on his own. Jojo Rabbit received nominations for Best Picture, Best Supporting Actress, Best Costume Design, Best Production Design, and Best Film Editing. Producer Chelsea Winstanley and production designer Rā Vincent were the other two Maōri nominees this year, for Best Picture and Best Production Design respectively. Maōri people have been nominated before, including Waititi himself in 2005 for his short film Two Cars, One Night, but this year, Waititi actually won.

Not only is he the first Maōri winner, he is only the third Indigenous person to ever receive an Oscar. Buffy Sainte-Marie, a Canadian woman from the Qu’Appelle Valley, won Best Original Song at the 55th Academy Awards in 1983, becoming the first Indigenous person to win an honorary Oscar. It was only three months ago, in October 2019, that Cherokee actor Wes Studi received a commemorative Oscar. I knew recipients of colour were few and far between at the Oscars, but that just floored me. Three recipients! Throughout the whole world! As well as his award, Waititi gave the first ever land acknowledgment at the Oscars. White people can (and do!) make a land acknowledgment. There was no actual barrier to someone else doing a land acknowledgment, other than lack of respect for Indigenous people.

The gap is further compounded by Waititi’s acceptance speech, which he afterwards described as “the worst”. With all respect, Mr. Waititi, I beg to differ. In his speech, Waititi dedicated his win to “all the indigenous kids of the world who want to do art and dance and write stories. We are the original storytellers and we can make it here as well.” Those words keep spinning in my head. “We are the original storytellers.” Not past tense, not “we were”, but we continue to be. For my whole life, Indigenous people have been relegated to history books, as if we don’t have countless thriving, growing cultures across the world.

What strikes me most about Waititi’s statement, though, is that it’s the truth. Indigenous peoples were the first peoples, so of course they were the first storytellers. For humans, telling stories is one of the most basic forms of connection. Stories are the main things that connect me to my family, my ancestors, and my country. Waititi’s words hit home for me, particularly at this point in time in my life. With somebody with as many different identifiers as I have hairs on my head, I worry that my writing isn’t true to my Aboriginal heritage. It feels like one piece is “lesbian writing”, then the other “disabled writing”, and then “Aboriginal writing”. The acceptance speech was of great comfort, especially because Waititi won the award for a film that didn’t centre a Maōri experience.

When Waititi gave his speech, the overwhelmingly white audience weren’t allowed to ignore Waititi’s Maōri identity. Jojo Rabbit is very centred in Jewish history, which is relevant because Waititi is also a Jewish man, but he is also always telling Indigenous stories, because he is an Indigenous storyteller. Even though he is adapting Christine Leunens’ novel, and telling a story about Jewish genocide, he is still the one telling the story. He does not stop being a Maōri storyteller just because it is not the focus of his stories. That perspective is in everything he writes because by telling stories, he is continuing millennia long traditions. It’s integral to his work, just like it’s integral to mine.

Of course, I’m ecstatic that Waititi won this Oscar. However, the joy is coloured by a sense of “Really? Now?”. I feel this win was long overdue, and I’m not alone. My friend Kitty, the power source of all righteous anger in the Wiradjuri nation, put words to our frustration surrounding Waititi’s long overdue win: “Like Thor: Ragnarok wasn’t the best Marvel film to date? Like Hunt for the Wilderpeople isn’t one of the best films of the decade? Like What We Do in the Shadows wasn’t one of the best comedies ever made?” This anger is only compounded by article after article saying that Waititi is “of Maōri decent” and “of Jewish heritage”, as if it’s something from long ago. Waititi is a Maōri man, and it makes me want to scream every time a non-Indigenous reporter shys away from saying that. There is celebration in this win, but there is also anger, and there is relief.

I want to end this article with optimism. Taika Waititi is a powerhouse, a trailblazer, and a personal hero of mine. I want to believe that his Oscars win is the first of many; not just for him, but for many Indigenous creators after him. I want to have faith that we can make it there as well. I really, really hope the next Taika Waititi was watching that speech and decided it was time to start telling their stories as well.

Previous A Welcome Parasite: Changing the Face of White Hollywood
Next La Belle Époque Review: Whimsical and Witty Exploration of Romance Over Time