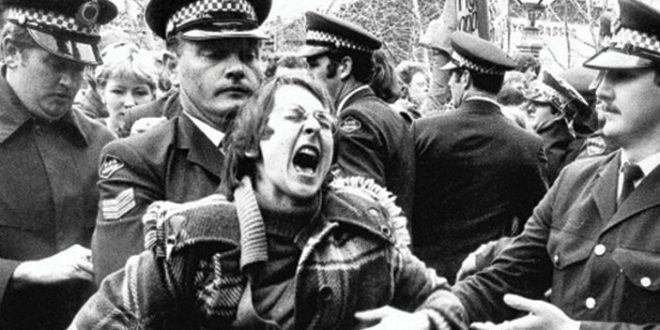 Violence on Oxford Street: can you heal with the people who hurt you?

Sydney’s Mardi Gras festival has a violent history and this violence remains entangled within the lives of LGBTIQ+ people to this day.

These things are not often associated with the festival that sprinkles biodegradable glitter through Sydney’s streets each year.

However, Sydney’s Mardi Gras festival has deep roots in protest, and these three themes remain entangled within the lives of LGBTIQ+ people to this day.

The origins of Mardi Gras have a historical significance in the fight for LGBTIQ+ equality. With the first march In June 1978, 26 years before homosexuality would be legal in Australia. The group marched in solidarity with the San Francisco Freedom Day Committee fighting a bill that would allow schools to fire LGBTIQ+ teachers in Californian state schools for “advocating, imposing, encouraging or promoting” homosexual activity. However, when their parade permit was revoked, attendees were met with violence at the hands of police, brutally beating and arresting 53 demonstrators.

If this seems familiar, you may be aware of the group Pride in Protest who have been vocal about their rejection of the bill submitted by One Nation NSW leader Mark Latham. If passed, the Bill will prevent teachers from educating students on the existence of trans and gender diverse identities, and could revoke the teaching license of those who support trans and gender diverse students.

The group made headlines when NSW Police revoked a permit for a Mardi Gras alternative event bringing the festival back to its protests roots. After pressure from the LGBTIQ+ community, an appearance in court, and overwhelming public support from The Greens, Labor and Independent MP’s, NSW Health granted an exemption allowing the event to go forward. Despite a strong and intimidating police presence, an estimated 3,000+ people attended and marched through Oxford Street, demanding an end to LGBTIQ+ injustice.

For me, seeing the similarities between the first Mardi Gras protest movement and current events, solidifies Pride in Protest as the answer for the new generation of Queers who feel unseen within the celebratory tones of Mardi Gras. For them, there is still so much left to fight for.

The past year has been challenging at best, and utterly devastating at worst. I have experienced loss on a scale I did not know was possible. I have lost friends, employment, housing and for a while my dignity. The economic and social impacts of COVID-19 have highlighted disastrous structural problems within our social services and according to a recent study from Rainbow Health Victoria, COVID-19 created a disproportionate set of challenges for the LGBTIQ+ community.

During the past year, I have also seen a significant increase in divisive public discourse (read: hate speech) and legislative change (read: human rights violations) threatening the rights and protections of LGBTIQ+ people, specifically children.

The political party One Nation who seem to have taken advantage of an out of touch Prime Minister have made it their mission to insert their bigotry throughout Australia’s major legislation and infrastructure changes. Now with the loss of the Family Court System and the threat of erasure from our education system looming, the concerning statistics surrounding the mental health of the LGBTIQ+ community do not seem surprising at all.

Mardi Gras has woven itself into Australia’s cultural fabric. The parade and the festival play a crucial role in the emergence of Australia, as an internationally recognised tourist destination. With the overall economic impact of the Sydney Festival estimated to be over $50 million. Now with the country in a post-pandemic economic freefall, Mardi Gras’s significant contribution to tourism, hospitality, and the arts are needed now, more than ever.

While Mardi Gras contribution to Sydney’s culture and the economy remains significant, the lack of acknowledgement to the very real challenges faced by the LGBTIQ+ community for many, is not good enough.

This year’s parade took on a new format within the confines of the Sydney Cricket Grounds, the day was not without incident. Last year’s radical protest group, Department of Homo Affairs, made a brief return, storming the field as the NSW Police took centre stage. Dressed as cricket umpires with the slogan “cops are out” on their backs, the daring foursome stretched out a bright blue banner in front of the NSW Police preventing the float from moving forward and showcasing their support for the belief that the glorification of an institution responsible for causing so much death, destruction and violence towards the LGBTIQ+ community has no place in the parade.

Discussions of complacency, loss of meaning and an out of touch corporate board within the Mardi Gras organisation have long existed with criticisms from every facet of the community, including myself. However, the fact that I can critique an organisation whose sole purpose is to elevate the visibility of the LGBTIQ+ community must not go unnoticed. Organisations like Mardi Gras simply did not exist 50 years ago. To this day, they remain the only major organisation with unfounded government, corporate and community support with a global platform. The critique lies in the question of what exactly they are doing with that platform.

Of Course, Mardi Gras will tell you that their corporate sponsorships go towards their float, event and performers scholarships – and they aren’t wrong. This year in the hopes of regenerating the hospitality and arts scene, Mardi Gras announced a nation wide grant for venues to hire and support their local queer artists and host a parade viewing party.

Maybe Sydney’s Mardi Gras has reached the peak of its evolution? As an organisation that has paved the way for LGBTIQ+ reform, they have survived and thrived by working within the margins of their allowed existence. There is hope that with a new CEO and partnerships with organisations such as Equality Australia, the festival is showing signs of reinvigorating its protests roots. However, I will not be looking at Mardi Gras to lead the change and nor should you.

It is my hope that Mardi Gras has found a new home in the Sydney Cricket Ground, a symbolic gesture, leaving Oxford Street available for those ready and willing to take it back.