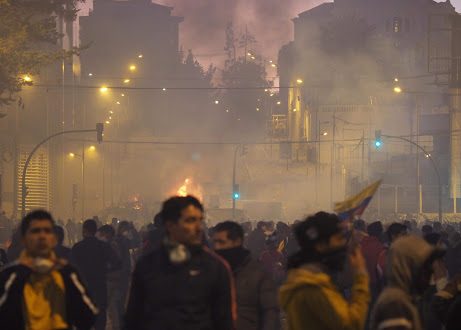 Victory against the IMF in Ecuador – So What’s Next?

At 10:00pm on Sunday 13th October, it was announced that Decree 833 was repealed in a victory for the social movement that had brought Quito to a halt for the past eleven days . Jaime Vargas, president of the Indigenous group Conaie announced that “We have repealed the decree 883, they have confirmed to me that from tomorrow all the tariffs will have to be normalized, this fight is not only of the natives, but for all the Ecuadorians and Ecuadorians”

In an exhaustingly violent struggle, it is a tribute to the Ecuadorian people that they maintained an unshakable level of energy and determination through to the very end.

On the morning of October 3, workers all across Ecuador awoke to find that the price of petrol in their country had more than doubled, signalling an end to a subsidy that had been in place for over forty years. This was only a part of a series of austerity measures contained in Decree 883 which also undermined workers’ salaries, benefits and pensions in the public sector. These policies were intended to facilitate access to a 4.2 billion dollar IMF loan, exemplifying the extreme neo-liberal direction in which Lenin Moreno is attempting to steer the country. His decision in June to allow US anti-narcotics planes to use an airstrip in the pristine Galapagos Islands, as well as the release of Julian Assange earlier in the year, demonstrates the strength of US neo-imperialism which is taking hold of the country, and of which Ecuadorians are acutely aware.

However, discontent with the state of affairs in the government certainly did not begin with Moreno, although they have indeed been worsened since his election in 2017. The former President Correa’s land and water policies which included the authorisation of open cut mines and concessions to foreign companies on Indigenous land without consultation, sparked mass protests in the country in 2012. President Moreno has continued this policy of aggressive extraction, only to find thousands of Indigneous people marching from all corners of the country including the deepest recesses of the Amazon as one protestor tells me, to lead the people forward. What this looked like in practice is truly awe inspiring; meetings of Indigenous leaders from all across the nation in Quito’s ‘House of Culture’ which they  appropriated as a shelter and central organising space, as well as the absolute respect for Indigenous knowledge and struggle amongst workers, students and farmers.

The murder of Indigenous leader Segundo Inocencio Tucumbi Incubio of the Cotopaxi province, marked a culmination of protestors’ anger towards the state violence being waged upon them. This had included nightly tear gas bombings upon the universities and House of Culture where activists and their children from all over the country had been taking refuge. According to a local news source ‘Radio Pichincha’ whose headquarters had been raided by police during the protests, 1152 people were detained, 7 had been killed, and 1340 had been reported as injured as of Sunday the 13th October.

The Ecuadorian peoples’ victory in forcing the government’s hand to retract a neo-imperial decree through a spontaneous and yet highly organised social movement, is a testament to the power of grassroots organising. Wandering through the camps of protestors having meetings, sorting through the excesses of food, clothing and medicine that had been donated by the citizens of Quito young and old; it seemed as if everybody had found their place in this movement and was fulfilling it.

However, it would be unduly optimistic to celebrate the end of struggle for good in this country. The facebook page of the group ‘Winds of the People’ made a post following Sunday night’s announcement which outlines the fundamental injustices with which Ecuador will have to continue to struggle. These included the fact that:

It appears that Ecuador’s future lies in the possibility of its people using the momentum and lessons gained from these past 11 days to continue the anti-imperial and ultimately anti-capitalist fight if they want to effect any permanent change in their country. Australia has a lot to learn from the bravery and determination of these people who have shown the world that only large-scale rebellion can force those in power to retract even just elements of their repression.

Share
Previous It’s a Privilege to Pee
Next Anomaly