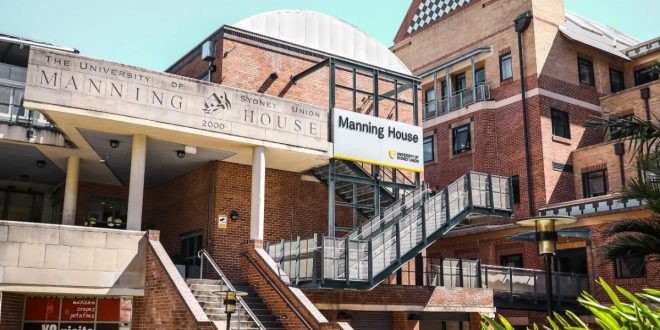 Those halcyon days of Clive James, The Chaser and indie gigs are long-gone. The Manning Bar at the University of Sydney has closed its doors to daytime trading (vale). As Honi Soit noted, and the Sydney Morning Herald quoted, it had long been running at a loss and in decline.

Manning Bar and our own Roundhouse aren’t dissimilar. They both host gigs and they’re a valuable asset for Club & Society events. Granted, they used to be a bit dodgy. Used to. Arc’s renovation of the Roundhouse has contributed to the improvement of its reputation and decor just at the same time the security guards there started enforcing the “no smoking” policy. It is worth noting that the Roundhouse pre-renovation wasn’t heaven. The upstairs area was a bit of a maze (especially after a few schooners), the weird food court downstairs was a bit lacking (nevertheless I was introduced to a beloved banh mi there) and there was a small restaurant with a disproportionate amount of stained glass.

Student nostalgia is weird. Everyone knows that the places you frequented were a bit crap and uncomfortable. If they weren’t, they would have been too expensive for a typical student’s budget. You miss them even though you’ve moved on in your life (presumably), unless you’re a Socialist Alternative member taking a decade to do an Arts degree. A lot of the nostalgia seems to be driven by a sense that you were carefree (even if you weren’t) and the fact that encountering quirky places get a bit rarer over time.

Back to Manning and the Roundhouse. The Unis of Sydney and New South Wales have a couple of well-frequented bars nearby, which makes sense. By and large these bars seem to fit into a couple of categories, which are as follows:

Manning Bar reportedly had an “incredibly rapid decline” according to this guy[1] on Reddit. Somewhat similarly, there have been several reports of the death of the Roundhouse, but they were greatly exaggerated. It’s a resilient institution! But just like the Australian National University’s new food court, the form an institution survives in may not be quite as one remembers, particularly if you remember it as cheap, casual or vibrant.

Student demographics and behaviours are undeniably changing. The proportion of international to domestic students is increasing over time, but the trend isn’t unique to UNSW[2]. I’d also wager a majority, if not a sizable chunk of international students don’t drink. This is based on the three international students I have mentored (truly a representative sample size!). I’m not sold as to whether the introduction of trimesters has had an impact on business given the propensity of domestic students to drink – we’ll have to wait for more data.

Additionally, commute times in Sydney have grown over the last few years[3] (especially considering the light rail construction). More broadly, rents in the inner suburbs – East and West – are also rising over time[4]. These facts reduce the propensity of people to drink in licensed venues in the first place, given they have less free time and money to spend. The fact that many university degrees are considered a quasi-vocational investment is another contributing factor, but that is another issue entirely.

In addition to a fall in patronage, the introduction of Voluntary Student Unionism in 2006 took away subsidies, not only for the campus bars but for much of student life. Until quite recently and unlike Arc, USU membership costs money, which discouraged people from joining but improving the Union’s finances. The Student Services and Amenities Fee (SSAF) was then introduced in 2011 by the Gillard Government. Money from this fee must go towards what’s written on the label and it’s doled out by the university. In 2018, Arc received $4,503,414 in funding from UNSW[5] while the USU received $4,322,350 from the SSAF[6]. So while the SSAF figures are roughly comparable, Arc’s venue losses are less pronounced than the USU’s[7].

So beyond Arc membership being free, what makes the Roundhouse different from Manning? Profits from Arc’s operations, like the Whitehouse, cover the Roundhouse’s losses. This was at least true before the refurbishment – more recent financial reports aren’t available[8]. In comparison, all the USU outlets lose money. Moreover, Arc’s finances, including food & beverage losses are stable[9] compared to the USU[10]. The only sources of large variations in Arc’s net financial position since 2011 were the sale of campus outlets (for example, some campus retail outlets were sold by Arc to UNSW and the sale was finalised in 2012[11]) and a change in accounting practices in 2017[12]. USU finances have more year-on-year variance.

If anything, the trendline shows a marginal improvement over time

More broadly, Kensington and Kingsford are lacking in alternative options compared to the Inner West, which means less competition for Arc venues. The Roundhouse is also bigger. It has a capacity of 2200 people (for reference, the Enmore Theatre has a capacity of around 1600 seated or 2500 standing) while Manning has a capacity of 950 max. Bigger gigs allow bigger revenue. Things are looking good!

Honi spoke about a dying campus life but it’s not dying, just morphing into something different which we’re not used to or maybe can’t afford. On the flip side, there’s Fire Safety compliant now. I’ll see you down at our new and improved version of Manning, maybe with a bubble tea in hand.

[1] It’s hard to get a hold of historical USU Reports and verify the decline so I have no idea if this is true.

[3] Runing Ye and Liang Ma 2019, ‘Australian city workers’ average commute has blown out to 66 minutes a day. How does yours compare?’, 30 July, The Conversation

Have a play around with this and prove me wrong.

[7] Historical USU Reports are hard to find. I’m happy to be corrected!

[8] This is based on a conversation I had with a former Board member. No more recent or granular detail is available on Arc’s website and I’m more than happy to be corrected.