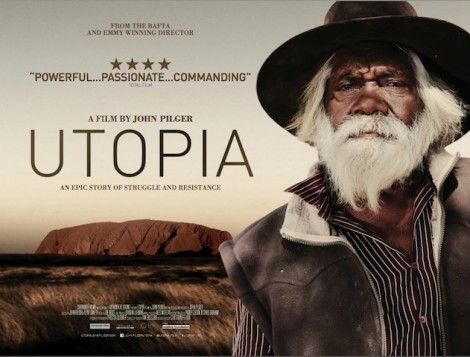 Ahhhh, O-Week. A chance to kill off a few brain cells before the readings pile up, right? Not necessarily. On the last night of O-Week, Nura Gili hosted a screening of John Pilger’s new documentary Utopia, which was a welcome change from the usual drinking and society events. The film is a reminder of the history we as Australians frequently overlook. Much like the Chinese government has blanked Tiananmen Square from the history books, the true history of Indigenous Australia is barely covered in the syllabus, nor are we really ever taught the true extent of maltreatment and oppression of the first Australians – both in the past and as we speak.

Pilger’s film is a basic documentary in style and doesn’t attempt to add any glamour to a subject that most Australians would rather ignore. A lot of the footage is filmed on handheld, which reflects the reluctance of officials to talk about questions like why there is no commemoration of the conflict between settlers and Indigenous Australians in the war museum, or why a former prison camp and place of intense suffering, Rottnest Island, has now been converted into a holiday retreat.

What is important about Pilger’s latest work is not style or genre. It does not strive to break the conventions of documentary making, nor does it try to combine new technologies into the filmmaking process. The essence of this film is a message that made me angry. Angry about how, as one of the wealthiest countries in the world, there are people living in conditions akin to the favelas of Rio de Janeiro or the slums of Delhi. Angry because a country with a health care system that functions well for most people has failed to fully eradicate diseases that Pilger described as Dickensian. I am angry with Australian governments, past and present, for their collective disregard for Indigenous history. I am angry about interventions, at every period of time, in this nation’s short history.

The key idea of this film is essentially Australia’s blatant lack of regard for its first people. This idea was really driven home in a series of short interviews conducted by Pilger on Australia in 2013, where person after person reiterated the age-old stereotypes perpetuated by governments and the media about Indigenous Australians.

The screening was topped of with a Q&A session hosted by John Pilger, assistant producer Chris Graham and researcher Amy McQuire. Topics such as the school curriculum, land rights and constitutional reform were discussed, amongst many others. One thing that still sticks in my mind was Pilger’s response to a question about propagating discourse, to which he answered that the time for talking is over, and now is the time to act.

The film Utopia is a confronting, but unsurprising look at the state of Indigenous affairs in this country. It will leave you with some serious food for thought and a strong desire to act.

Previous Sphero 2.0 Review
Next Too Young for Wearing Black