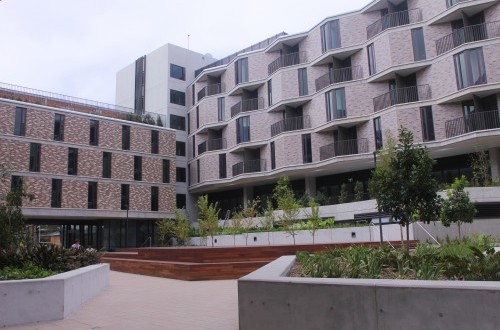 UNSW’s new colleges are here, but at what cost? With the new Kensington Colleges buildings on the verge of completion at the end of last year, hundreds of incoming and returning residents were looking forward to spending 2014 in the brand new facilities. Daniel Sherratt, a second year resident, was one of them.

That was before, however, he saw the new rent price.

“My reaction to the price rise was one of shock,” he says.

While the previous cost of staying in The Kensington Colleges was $14 645 for the year, the rent has risen by over $3000 – about 20% of the original price – to $17800. Rooms with en suites cost $19 600. The number of weeks that residents have to pay for has increased as well: they must now pay for accommodation in the mid-year break, even if they don’t plan to stay during that time. Overall, this has been the cause of much complaint from residents of the three colleges that make up TKC, Basser, Philip Baxter, and Goldstein.

“I would have probably stayed if the colleges were more affordable. We all thought that there would be a price rise for the en suites and maybe a little rise for normal rooms, but the difference was substantially more,” Mr Sherratt says.

Mr Sherratt, who for the past two years in college relied on money from Centrelink and money that he saved on his gap year, has now moved out into a rental apartment with some friends from college. He has had to relocate from his home town of Port Macquarie in order to attend UNSW.

“These two incomes were stretched while at college as it was. The price increase has made it completely impossible for me to think about returning.”

“Understandably there were several residents who were quite distressed,” Tom Morrison, a third year resident and two term president of Baxter College says.

“The rise in price combined with the instability of the welfare security in Australia has meant that you can’t be self supported through college, even with government assistance. You need either extended savings, parental support or some other kind of supplementation to your income.”

Savannah Lloyd, a second year Basser resident, who needs to work frequently in order to pay for her college fees, was expecting the price rise.

“I was a little shocked, but I kind of expected it with the new buildings. I didn’t think it would stay the same,” she says.

She will have to add more work into an already busy schedule to help cover the costs, though.

“I work Friday afternoon and night, Saturday and Tuesday afternoon to pay for this. I have taken on more tutoring work to assist in paying for it and I suppose cut back socially in order to balance everything. My degree requires 5 days of dance classes a week.”

It’s not just residents who are feeling the impact of the price rise, however. Many students going to college rely on parental assistance, and the parents too have expressed some discomfort at the new rent prices. David and Jane* support their son through university, and pay for his college fees. As their son is from a rural area, with nobody to move in with in Sydney, college was almost the only option for him. Though their son has a casual job in Sydney, they still have to take out a loan from the bank in order to help their son go to university.

“It was a bit scary, to have an extra $3000 a year when I’m on a small income, and still not small enough for my son to get youth allowance. It basically means I have to borrow more money, and pay more off,” David says.

“That means we have to tighten our belts here so that we can pay back our loan payment to the bank.” According to Isabelle Creagh, the Director of UNSW Residential Communities, the price rise is all just a part of paying for the new facilities.

“We’ve basically got a big mortgage now, so we’ve got to pay it off. We needed to set a period of time in which we agreed to pay it off, and that’s what we’ve presented to the university when we asked for the funding, and that’s what we’ve got to try and stick to now. We have benchmarked against other university colleges in Sydney, and the pricing, in terms of the package of services that it offers, it is comparable with other residential colleges in Sydney.”

“They’re designed to take the edge off the price rise, so if you do rely on Centrelink, or if you do not come from a high socioeconomic background, you’ve got the ability to continue to reside at college thanks to that supplementation,” Mr Morrison says.

“A lot of residents presented to us and said ‘look I’d really like to come back, but I don’t think I will be able to because it will be outside of my price range,’ so we just had a bit of a brainstorm about how we could potentially create some financial support,” Ms Creagh says.

However, the future of these scholarships is uncertain, as they were provided by one off donations last year. And with the price of rent in TKC expected to rise at a steady rate every year, according to both Mr Morrison and Ms Creagh, more residents could find themselves in a difficult position.

“It’s just going to depend on where the donations are coming from…we’d need to find replacement donors every year to continue these,” Ms Creagh says.

She believes that there are many places that new scholarships could come from.