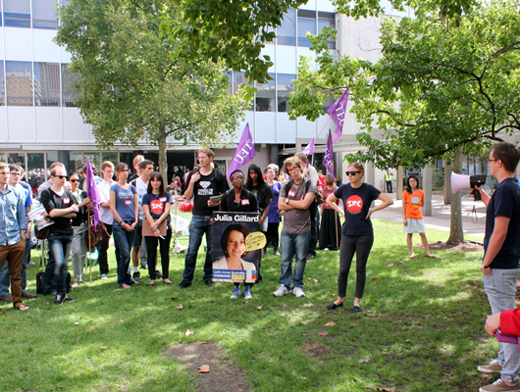 Students at the University of New South Wales held a snap action on Wednesday to protest the federal government’s $2.8 billion cuts to the higher education sector

More than a 100 students took part in the action, held on the Science Lawn of the University’s Kensington campus.

President of the UNSW Student Representative Council, Ross Willing, described the cuts as deeply disappointing. Mr Willing said “There can be no greater priority for a Federal Government than to properly fund education at all levels. These savings are unnecessary and will hurt all students in Universities across the country.”

President of the National Union of Students, Jade Tyrrell, said “Pretty much every student will be affected at university as a result of these announcements.

“Students are worried about course cuts, a reduction of services and staff cuts.”

The federal government has defended the cuts to universities by arguing they are necessary to fund proposed reforms to school funding. Those reforms are named after the UNSW Chancellor, David Gonski, who spearheaded a landmark review into education funding. Gonski has publically criticised the funding cuts along with UNSW Vice-Chancellor, Fred Hilmer.

Professor Hilmer supported the students rally against the cuts. “This is an issue where staff, students and the administration are as one in their concern about the potential effect of these cuts on our universities and the quality of the experience we can offer our students. We can only hope the government will listen to these concerns.”

“Students agreeing with their vice chancellors … really demonstrates how dire the situation is,” Ms Tyrrell said.

The NSW Secretary of the NTEU, Genevieve Kelly, compared the cuts to former Prime Minister John Howard’s threat to reduce university funding by $450 million, pointing out that these cuts would rip out $900 million from university budgets.

“These cuts will require legislation to be implemented and we are going to work with students and build a campaign to oppose them,” Ms Kelly said.

On top of the $900 million cuts to university budgets via a 2 per cent “efficiency dividend”, other cuts include the conversion of Start-Up Scholarships into loans, the removal of tax deduction status for educational expenses and the removal of the 10 per cent discount on the payment of HECs fees upfront.

The Coalition has supported the cuts while The Greens’ spokesperson for higher education, Senator Lee Rhiannon, said in a statement:

“Australian universities were overdue for a funding increase. Two government instigated reviews recommended a minimum ten per cent increase in university base funding.

“The government had clear advice that billions of dollars was needed for the higher education sector. Instead the Labor plan will directly cut $1 billion from the nation’s universities and take money off students by converting scholarships into loans.”