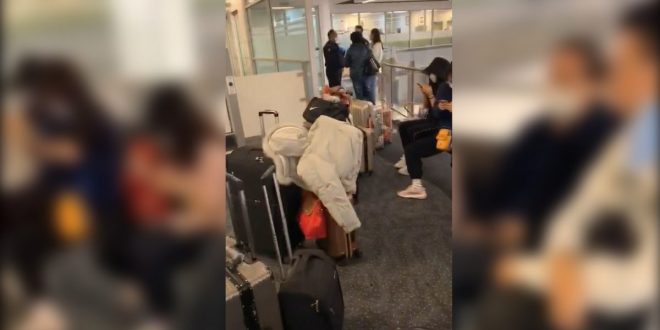 Chinese passengers on Asiana Airlines OZ601 got off at Kingsford Smith Airport on 2 February, expecting a small delay to clear immigration. They were in for the wait of a lifetime.

23-year-old UNSW Electrical Engineering student Huang* told Tharunka, “At the beginning we were made to wait in a queue. There were [Border Force] staff there but they did not call us up.” Huang said that staff were “were joking amongst themselves, playing on their phones.”

That day, a group of 20 Chinese nationals arrived in Sydney on at least 4 different flights. Their passports were confiscated and they were held for up to 10 hours by border officials. At no stage were they clearly told how long they would be held for, or for what reason.

22-year-old UNSW Finance student Zhao* flew to Sydney from Chengdu via Kuala Lumpur and arrived a few hours later than the Asiana passengers. She said, “I was told that if I passed a health check I would be allowed to enter the country.” This ‘health check’ consisted of being asked three simple questions by a person she assumed to be a medical professional: how she felt, whether she had enough masks to use, and whether she had recently been in the Hubei province.

The group of 20 Chinese travellers was not given a medical check. Although Zhao thought she had passed the health check, she was denied entry along with the others.

In the afternoon, officials began interviewing passengers. But by the time it was Huang’s turn, they had lost patience and refused to listen. Passengers were told they had two choices: voluntarily buy a ticket back to China on the spot, or have their visas cancelled and be forced to fly back at their own expense. Travellers were not permitted to leave the interview room until they had purchased expensive last-minute tickets. Border officials even told those who did not have enough cash to ask relatives for money over the phone.

The passengers too were losing patience. The atmosphere in the room was becoming increasingly tense and some lost their tempers. Others in the group attempted to reason with officials, citing media reports which suggested that the travel ban only applied to tourists, or explaining that they had left China before the policy was announced.

However, border officials maintained that “the decision had been made” to bar their entry, and those who continued to speak would have their visas cancelled.

“I felt I had lost my rights, being prevented from speaking in such a situation,” said Zhao, who felt a sense of despair at not being heard. Others echoed her sentiments. Throughout the day, passengers were not permitted to move more than a few metres.

Passengers were furious that some of their compatriots had cleared border security without a hitch simply because they had used SmartGates (an electronic form of passport control). The passengers suspected that the Australian Border Force lacked the capacity to process so many Chinese arrivals, and that a decision had been made to randomly hold back some and let others through. Furthermore, passengers agreed that there was an undertone of racism to the incident, because only Chinese nationals were being targeted.

Huang said he saw an elderly man break down in tears after being seperated from his entire family in Australia. He also said that those around him were not fed until he, who had not eaten since the night before, and an elderly woman complained. However, Zhao and 27-year-old UNSW computer science student Li said that border officials had a good attitude overall, treated them well and offered them water and snacks.

In an almost comical form of apology, Border Force officials offered to pick up the tab on any meal passengers chose in the airport, after having held the passengers all day. Huang said the group, many of whom were students, had grown close because of their shared day of hardship. They resigned themselves to the prospect of returning to China. Many were less concerned about the deadly epidemic and more concerned about graduating late.

For some, news that they could finally enter Australia came not from an  official, but from their WeChat group. Flight information screens displayed the message that four flights arriving that morning would be allowed to proceed to Customs. Some were in the final stages of boarding their flights back to China when they received the wonderful news. But Zhao was in for one final twist: hers was not one of the four flights. It took a fellow passenger’s wrangling and an excruciating wait for approval by the “bosses” for her to stay.

Huang claimed Asiana Airlines let Chinese passengers onto Flight OZ601 – despite knowing about the travel ban – because Australian officials gave them the green light. Asiana Airlines and the ABF have been contacted for comment, but have yet to respond.

Zhao, said she thought the travel ban policy could be beneficial to Australia, but that the Federal Government “should provide a grace period for travellers who were already on their way to Australia.”

Despite their rough day, all three students felt a great sense of relief. Li looks forward to completing his term of study. After the ordeal, Huang said he couldn’t wait to go to bed and eat hotpot the next morning.

*Names have been changed.