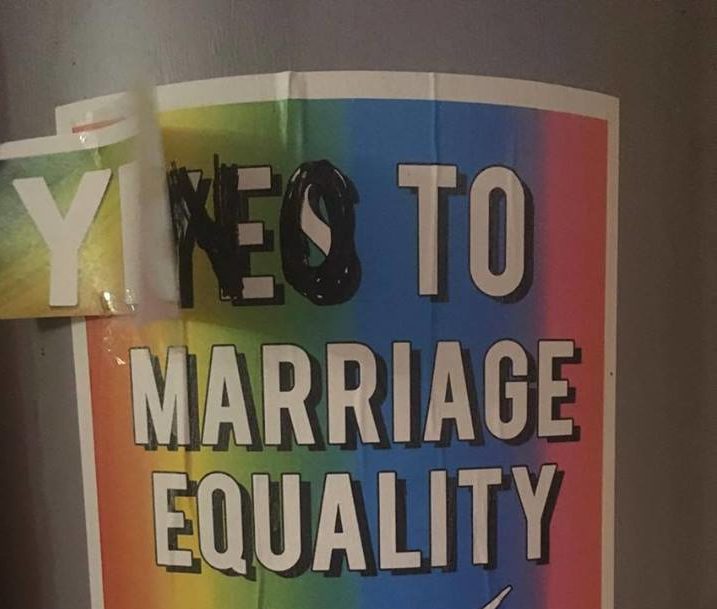 On the evening of 13 September, the Queer Space was attacked when stickers left over from Mardi Gras were removed from the external door.

The stickers torn down were a large rainbow heart with “UNSW” written inside it and an individual “#UNSWPRIDE” lettering. The stickers have been on the door since March this year and would require significant effort to remove.

Located on Level 9 of the Chemical Sciences Building, access to the queer space is uniquely restricted; students must contact the Queer Officers via student email in order to obtain the code.

An individual would have to go to the building after hours to ensure they weren’t seen by academics on that floor.

Other instances of queerphobia have also occurred around campus recently.

Materials encouraging students to vote “no” in the postal plebiscite have appeared in the bathroom stalls of the Quadrangle and Matthews buildings. The materials did not provide any information regarding authorship or contact details.

The words “another stolen generation” were handwritten onto one of these posters.

Posters supporting the “yes” vote in the postal plebiscite have also been vandalised on campus. The Queer Collective has sought to fix these posters by covering the word “No” with a piece of paper with the word “Yes” on it.

“We didn’t expect for people at UNSW to actively hate against the queer community, especially by targeting the queer space which many find as safe space for them to freely be themselves,” she said.

“It’s not okay to attack people just because their point of view doesn’t match yours, it’s not okay to verbally or physically abuse others, and it’s certainly not okay to target queer people on campus and denigrate who they are.”

On 15 September, an email was sent from Student Hub to the “UNSW Community” with the subject line “Marriage Equality Plebiscite”.

“Unfortunately, in the last 48 hours we have become aware of a small number of instances of unacceptable behaviour directed at the LGBTIQ community, involving offensive graffiti and vandalism of posters,” the email said.

“We have met as leaders of the UNSW student and staff community to reiterate our shared expectation that all members of our community treat each other respectfully and considerately.

“Behaviour that is discriminatory, offensive, vilifying or in any other way targets staff or students because of their sexual orientation, gender or sexuality, will not be tolerated at UNSW.”

Ms Racela welcomed the university’s response but was critical of the fact that UNSW has not yet publicly supported marriage equality.

“It’s good that UNSW has stepped up and acknowledged what had happened on campus last week but we believe that isn’t good enough,” she said.

“It’s not fair that UNSW gets to claim they support queer students and staff yet remain on the fence about actively supporting the Yes campaign for marriage equality.

“They will turn the Basser Steps rainbow, they’ll raise the rainbow flag on key dates, they’ll fund a float, and even endorse the IDAHOT big gay wedding, but they won’t come out and say that they support the queer community.”

A list of the academic institutions that have pledged their support for marriage equality can be found here.

Share
Previous UNSW Students Shut Down Chancellery as Ties to Fossil Fuels are Exposed
Next Letter from the Editor: On the QUEER Cover