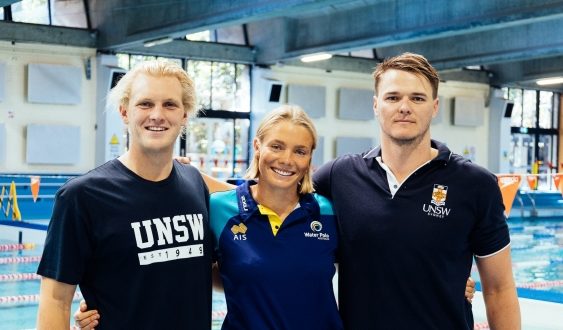 Our country’s Olympic water polo teams trained at UNSW before heading off to the games. We had the chance to catch up with them and explore their life-long journey to Tokyo.

Watching the Olympics on TV, witnessing the majesty and the spectacle athletes put on for us, it can be difficult to imagine those individuals when they aren’t on a pedestal.

The Australian men’s and women’s water polo teams used UNSW’s own Fitness and Aquatic Centre as a training base during their preparation for this month’s Olympic Games.

Aussie Stinger centre back and UNSW Law student, Amy Ridge, is a prime example of the proximity of superstars.

“I grew up, actually, in Randwick, around the corner,” she told us. “I think I was a water baby from the beginning. I did swimming and nippers, but I didn’t start water polo ‘till I was 13 – it seemed like a fun thing to try.”

Yet Ridge spoke with a veteran’s confidence. One couldn’t help being taken aback by the sharp, assured manner with which she spoke, nor the comfort and familiarity she so clearly felt with the pool.

“I would say I’m probably one of the key players in the team. I’ve been in the team every competition since the beginning of this cycle; I’ve played 86 international games … I think I would be at 100 in Tokyo if it wasn’t for COVID.”

Her counterpart in the men’s team, Tim Putt, tells a similar story, yet his demeanour was one more closely aligned with the laidback character we, as Aussies, tend to pride in our athletes.

“Her colleague’s husband was an ex-Olympian, Mark Oberman, and they’re like why don’t you get Tim down to have a crack. And I was sort of thinking ‘oh, I won’t really like this, it doesn’t seem to me my kind of thing… I like tennis and AFL and stuff like that.’ And then jumped in, had a blast… and haven’t jumped out of the pool since.”

The similarities between Putt’s story and Ridge’s, though occurring on opposite sides of the country, didn’t stop there. She, too, dove into water polo thanks to connections with greats of the sport.

“Andrew Yanitsas, who is the UNSW Men’s National League coach, was the head of water polo at our school – St. Catherine’s in Waverly –and he encouraged me to try it. I remember thinking ‘oh, I’m not very good at this’, but I loved it … and it was different from following the black line: it was more fun than swimming; it was a team sport that I could try with my friends.”

Despite such a quaint upbringing, the pair juggle a number of commitments that would induce nightmares in many of us weary university students. Putt simultaneously manages elite sport, a law degree, and a job teaching at the same school that introduced Ridge to water polo, St. Catherine’s. Ridge, too, balances water polo commitments with her studies.

“I always want to do the best at both, and I don’t want to feel like I’m burning the candle at both ends,” she explained, “so I have been studying law part-time for the past seven years; I’m going to graduate at the end of next year, so (I’m) taking eight years to do a five year degree, but I … can never get these years back, playing elite sport.”

Putt also confirmed that the commitment required to Olympic training is not to be trifled with. “The hours are gruelling. Most of the time leading up to this, it’s 5:30 mornings, 7-9 at night, you’re getting little sleep – falling asleep all through the day – but once you get that taste of the international stage… that feeling of beating someone. You can’t recreate that feeling. It’s the best feeling in the world.”

As was the case for most of us, however, their whirlwind schedule hit a wall thanks to the COVID-19 pandemic. Putt shared his experience of the return to normalcy, and the step down from the international stage.

“Everyone asks me this, and I found it was … sort of a groundhog year, y’know? Pools weren’t open so I was told, ‘do whatever you can.’ There was no pressure on us to do anything. So, I went down to the beach every morning with my mates – obviously socially distanced – and just went about my day with no water polo.

“Once we were allowed back in the pool, that’s when we started getting fit again. I came back over (in) November, and it was the same amount of time and preparation as that year before.”

Although they take the simple pleasure of opportunity in their stride, the pair are not ignoring the enormity of the games. Ridge, in particular, enters the games with the weight of highly successful predecessors nagging at her.

“We’re all very driven and we have that goal of winning a medal,” she explained, “there is the weight of history behind us, particularly in Sydney 2000 when the girls won gold. And, yeah, the women’s team does have a rich history, but I would say the pressure is coming from ourselves. it’s something that drives us more than scares us.”

“We want to be seen as the hardest working team, I think … we put in the most effort,” Putt also told us, “Our coach (Elvis Fatović) is from Croatia; he’s always blown away how much time we give to water polo while still being able to work.”

In a remarkable reversal of convention, the women’s team will be paid to go to Tokyo while the men’s team won’t, thanks to their greater success over recent decades. However, both the players  shared experiences of the struggles lack of funding can bring to a sport.

“Especially at a junior level it’s very hard: you have to pay for trips yourself if you want to go on a Europe trip with a junior squad, and those are really expensive and not everyone can afford that,” he said.

“Water polo is really biased for private schools: you have to do a summer sport, and water polo’s there, and that’s how most people get into it. I was the only public school water polo player in my team for years.”

The two of them both offered solutions to this issue.

“Yes, it is hard, and I think it does need to be really looked at … not, say, giving money directly to us; say, put more money into promoting the sport through the uni or schools,” Putt believes.

“Putting money into water polo improves the next generation of athletes but you need to look after your current athletes and support them,” Ridge explained, “It’s a balance between developing up-and-coming players by injecting money into the sport, and then also looking after your own and making sure that they can play at their best level for as long as possible.”

The pair eagerly named a number of their teammates as ‘players to watch’ in Tokyo:

“Rowie Webster, this is her third Olympics, she’s one to look out for,” according to Ridge, “And then there’s also Bronwen Knox – her fourth Olympics – she’s the first women’s water polo player to go to four, so she’s making history going to Tokyo. She’s incredible. Both of them won bronze in London, and Bron won bronze in Beijing as well.”

“And like I said, yes there’s that value of the medals and that feeling, but then there’s that sort of… smashing your goals, playing the sport you love with your mates.”

Share
Previous The poetic mystery of a forgotten city
Next The antidote to COVID-19 induced divisions: China and Palestine’s Global Solidarity