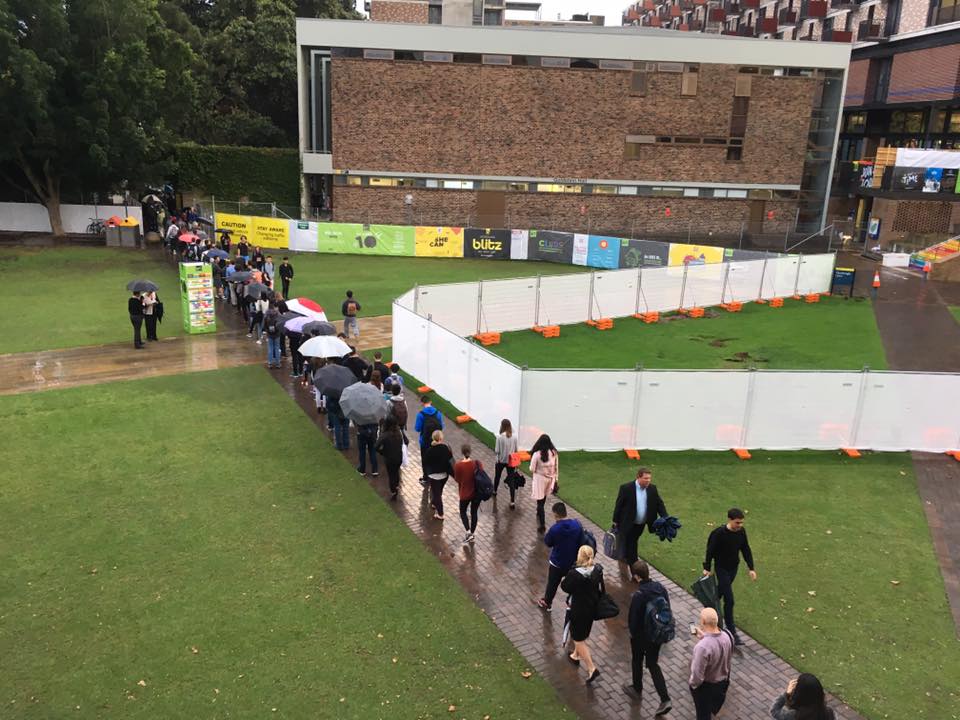 UNSW Isn’t A Cattle Farm: An Investigation into the 891

Thousands of students remain at the mercy of a notoriously late university bus route known not for its supposed express services but for its overcrowding and unreliability.

The 891 bus, which runs from Sydney’s Central Station to UNSW, is the main bus route following the rerouting of the M50 and other services due to construction of the South East Light Rail line.

Photos and social media posts from students have highlighted not just the long lines outside Central Station that extend into Belmore Park as well as into the Quadrangle on campus but also the lack of covered bus shelters during wet weather.

The bus route’s delays have been reported by students for over a decade with little effective action from the government to increase services and improve reliability.

Students report that the bus lines – or, rather crowds that are often eight to ten people deep and stretch back for tens or hundreds of metres – fail to move for up to half an hour, especially during peak times.

In 2008, when the university had a student population of about 40,000, students complained that they felt as if they were being treated like cattle on their bus journey to campus. Nine years later, it seems that nothing has changed, except that there are now over 50,000 students and even less bus services to the university.

The introduction of the Opal card in 2014 has done little to improve bus journeys for university students. The pre-paid tickets that were dipped once into machines whilst in the queue were replaced with a tap on and then a tap off on buses, further slowing down passengers.

The increased boarding and alighting times on the 891 bus became so serious that even the university wrote to the government about the issue. I also launched a student petition, calling for the installation of Opal card reader poles at the Eddy Ave bus stop for the university bus.

The government has so far ignored calls to install standalone Opal card readers for the 891 service, despite a similar suggestion from the university as a measure to speed up bus disembarkation times.

Then at the start of 2017, the government chose the “best time” to begin light rail construction outside the university – the start of semester, when demand is typically the highest.

With a rising student population and an ever-increasing demand for public transport, major changes were introduced to the bus network in February and March, limiting services connecting the city and UNSW to mainly the 891 bus.

In April, there were reports of students’ having to queue for hundreds of metres, sometimes in inclement weather, for up to an hour, just to make the five-kilometre journey back to Central station.

Transport for NSW coordinator general Marg Prendergast blamed the wet weather for the extensive delays and promised that the completion of the light rail in 2019 would improve public transport. She declined to address the existing lack of bus services.

A Freedom of Information (GIPA) investigation into bus services for UNSW has revealed what students have known for years – there are serious issues with Sydney’s buses that the government is deliberately ignoring, and now even trying to privatise.

The GIPA investigation I conducted showed that patronage on the 891 UNSW bus surged in Semester 1 this year, peaking at 335,430 trips during the month of March. This is more than triple the 87,455 trips taken in March 2016 for the same route.

Despite the government’s claim that services were not reduced following the renumbering of the 895 buses, overcrowding continues to be a serious issue for the UNSW bus service, with nearly 1 million trips made on the 891 buses in just the first five months of 2017, and patronage spiking dramatically since the beginning of the year.

Even with 984,411 trips made on the 891 bus from January to May 2017, the State Transit Authority, which is the agency responsible for Sydney Buses, claims that it does not have information on the future predicted capacity or patronage of bus routes servicing UNSW.

Students are also well aware of the increased travel times from Central to UNSW, with changes to the 891 route and bus stop locations making it even harder to get to class on time. This comes after 58 bus breakdowns (on the 891 route) were recorded by the State Transit Authority in the first five months of this year.

The declining reliability of bus services to UNSW has worsened over the past 12 months, with the 891 bus receiving the most complaints when compared with other Anzac Parade-based routes.

With queues stretching from lecture room doors (at the Goldstein building) to High Street, you’d hope that the “bus stop” was more than just a small sign and a few security guards trying to stop you from taking videos of the queue.

According to complaints received by the State Transit Authority about bus stops at UNSW, High Street Gate 3 is the worst bus stop, followed by Gate 9. With the Anzac Parade bus stops closed and the M50 bus rerouted away from UNSW, students have been left with no other option than to brave the poor conditions as they wait for a bus that would more than likely receive a fail in a score on reliability.

In a statement acknowledging the disruption caused by the light rail construction and bus changes, Transport for NSW “thank[s] the university and their students for their patience and assistance as we build the light rail, set to open early 2019”.

Transport for NSW was unable to comment on which of the UNSW stops was most popular with students, but that doesn’t seem to matter; on-time running surveys for the Sydney bus contract Region 9 (which covers UNSW) has nearly always been the most unreliable every month in 2016-17.

Using the all too familiar line of “light rail will transform public transport in the South East and provide reliable turn up and go services for the University every 8 minutes from the Anzac Parade stop on the Kingsford line and every 8 minutes from the High Street stop on the Randwick line” as a solution to the current lack of bus services facing students, Transport for NSW also stated that future light rail “services will have the ability to fit 450 passengers per vehicle”.

The government might think that tomorrow’s Sydney will thrive with light rail, but for today’s UNSW community, going light on today’s public transport issues cannot wait another day: we’re not cattle.

Share
Previous at fault
Next Spotlight On: Adrian Agius