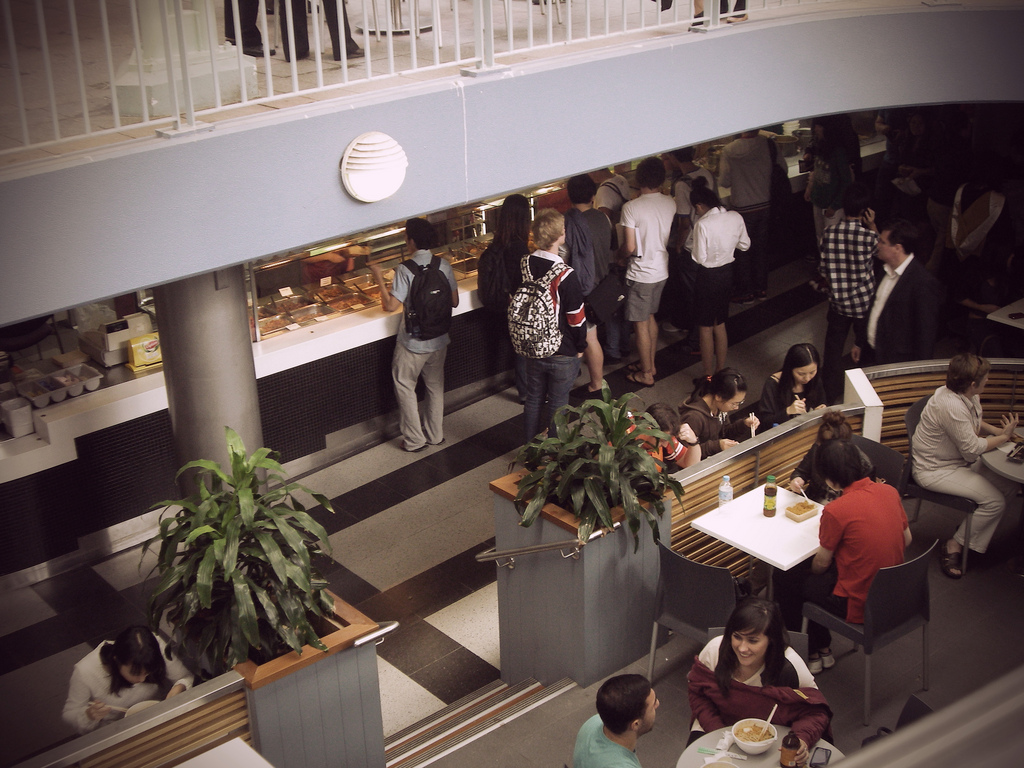 There are not many universities in the world that offer such broad selections as are available at the UNSW Kensington campus.

The Refectory at University College London is a pitiful basement with menus reminiscent of school lunches –a fact that is compensated by the free Hare Krishna meals offered outside the School of Oriental and African Studies – while Madrid’s Complutense boasts a large bar in the Philology Department that serves precisely what every other cafeteria in Madrid might serve: bocadillos and gazpacho, among other Spanish delicacies.

Yet this is true of both: they are cheap because they are student-catering entities. But a meal at UNSW costs more than a meal in Newtown, and about the same as in Sydney’s CBD.

The Student Representative Council (SRC) has said that lowering food prices and improving availability should be a top concern for the University.

“We think it is in the University’s interest to address food availability and prices because they have a direct impact on students and on campus life.” Tim Kaliyanda, the President of the SRC said. Since Voluntary Student Unionism (VSU) was implemented in 2006, food outlets at UNSW have been leased to independent tenants which, according to a newsletter released in July 2008, means these businesses have to compete with Randwick and Kensington.

Kaliyanda suggested there should be longer opening hours for postgraduate students or full-time working students who attend classes at night.

“Accessibility for students who work during the day is poor. One of the reasons I first chose to study at UNSW was because they offered night classes.”

As an outcome of this meeting, the University has agreed to look into the possibility of writing into the leases of commercial tenants that they must offer at least 1 healthy food item under five dollars.

In the Town Hall meeting with former Pro-Vice Chancellor, Joan Cooper, held in 2008 after the implementation of VSU and the refurbishment of food outlets, prices did not change.

“These refurbishments have brought with them an increase in the quality of food but have maintained the food pricing as compared to the pre-VSU days.” The meeting report reads.

But what the SRC would like is for Arc to control food outlets so that students will have cheap food options.

At the University of Sydney, 49 per cent of outlets are owned by the Union (USU), and another 40 per cent consist of tenants managed by USU.

The Communications Officer at USU, Christ Beaumont, said “Our interests are to provide the cheapest prices. Students already have a lot of costs involved in living close to campus”.

“I think we have to bear in mind that controlling outlets is not only important for students, it is also important for us as a union to offer services that no one else could. Outlets are not there just to make a profit, but to serve students who need it. We see students as our peers, not our customers.”

Beaumont added that opening hours are vital to life on campus, because it’s the role of the outlets to accommodate to student lifestyle and provide services that other commercial outlets can’t.

“We open far later than any other outlets. For example, the coffee cart outside the library stays open sometimes until midnight during exam periods.”

Another example is The Mallet St Café outside the nursing school, which, Beaumont added, is located in a quiet area and is kept open only so that nursing students will have somewhere to go.

Additionally, USU members receive a 15 per cent discount access card, which grants students a discount on all outlets on campus.

At the time of publication, the University had not responded to the question of whether providing cheaper food is a priority for UNSW, and whether later opening hours were being considered.

Kaliyanda said this was also a safety issue because late opening hours mean students do not have to go elsewhere to find food late at night.

Chair of the Arc Board, Natalie Karam, said Arc is always interested in pursuing options for subsidised food. “If we were given a space to operate such an eatery, the Board would definitely consider it as a service that achieves the student support goal of our mission. At the moment, we are exploring offering more funding to the SRC to expand the welfare room and free breakfasts on campus,” she told Tharunka.

The end of Arc retail services

In the last issue, Tharunka reported on the future closure of Arc stores, to be replaced by commercial tenants.

Ms Karam said if anything, a Coles on campus would make things less expensive for students. “Our top selling items at our stores can generally be bought for a much lower price at Coles. In particular, stationery items such as a standard 120-page notebook costs $2.44 at Coles, compared to $4.95 at our stores,” she said.

“The proceeds of the sale will fund UNSW student life for over 10 years.”

Mr Kaliyanda said that private retailers on campus did not necessarily mean that products will be any cheaper for students.

“They say that competition will decrease prices on campus, but the issue of food is an example that increasing competition does not mean cheaper prices.”