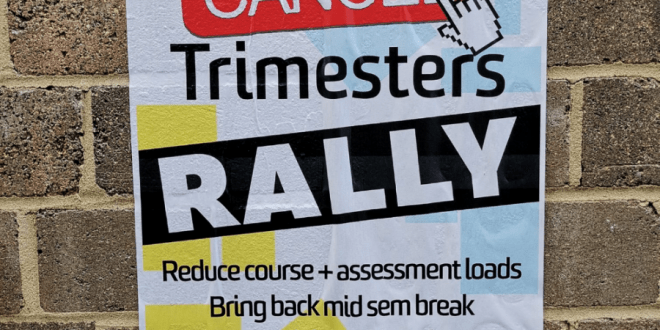 UNSW apologises for Cancel Trimesters protestor suppression. Are they scared?

UNSW’s Education Collective, a student body which seeks to improve the quality of education at the university, has recently increased the momentum of their Cancel Trimesters campaign. The campaign calls to reverse the university’s decision to implement trimesters, with measures including a rally planned for the 26th of June.

SRC President Angela Griffin highlights that as the “result of trimesters, students now have to manage larger workloads, have a decreased capacity to work or explore extracurriculars, and have increased stress.”

The President goes on to state that “students are angry about trimesters” and that “students should be able to communicate that anger to the university through protest.
If UNSW thought it could make such drastic timetabling changes and get away with it without any student or staff unrest, they were kidding themselves.”

To combat what appears to be overwhelming student dissatisfaction with trimesters, the Cancel Trimesters campaign has begun with a series of interventions on campus, involving postering walls and handing out leaflets to increase support and student interest in attending the Cancel Trimesters rally. Though this activity is common to student activist groups, and is oftentimes met simply with apathy by security guards, the campaigning students were recently met with hostility.

In a video posted on the Cancel Trimesters Rally Facebook event’s discussion forum, Hersha Kadkol, the ethnocultural officer of the National Union of Students, is seen being hassled by a group of UNSW campus security guards. Between the largely inaudible sounds, Kadkol is heard saying “you don’t need to ask management to hand out flyers”, before the security guard responds firmly with “you do.”

Kadkol recounts the incident saying that it was “so clear that management directed security to do something about us, and we quickly just said no, we are not going to stop what we’re doing. We speak for a vast majority of students and staff in protesting trimesters. Their attempt to intimidate us is outrageous but we’re not gonna give in.”

Education Officer Caitlin Keogh says that the treatment of activists by campus security was an “outrageous show of censorship.” They go on to say that “UNSW has proven how disingenuous their student ‘consultation’ process has been.” Griffin comments on the incident highlighting how “university campuses should be bastions of free speech and this is an example of student dissent being silenced by university management.”

A UNSW spokesperson addressed the video posted to the Cancel Trimesters Rally Facebook event’s discussion forum saying that “UNSW regrets that security officers asked students not to hand out leaflets on campus. This should not have happened and is not acceptable.” They went on to highlight that “freedom of expression is precious to the UNSW community and will be protected on our campuses.”

Kadkol reacts to the apology: “It obviously shows that they’re on the defensive. They are feeling the heat from students and staff around trimesters. They know what they’ve done is extremely unpopular. They didn’t care it was unpopular but they do care that students are starting to fight back. They do care because it affects their reputation.”

Kadkol continues, “It’s embarrassing for them, they wanted to be able to get their money making scheme through without significant opposition—only privately, other comments—rather than a mass campaign. So, I think they’re scared actually and I think that they are right to be because students are very angry and will come out to protest to overturn the trimester system.”

The UNSW spokesperson went on to note that they “acknowledge the incident should not have happened and apologise to the affected students.” They clarify that “steps have been taken to ensure that it does not happen again.”

Despite this, the Cancel Trimesters Campaign claimed on their rally’s Facebook discussion forum to be “hearing reports of security and management staff removing [their] rally fliers from the library” and additionally “attempting to shut down [their] ability to give lecture announcements.”

Keogh spoke of what is next for the campaign: “Next event is the student staff forum next Wednesday at 1pm for students to have their say. The key event is the rally on 26 June 1pm we are expecting it to be the biggest rally in over a decade.”

Levent Dilsiz is the features sub-editor of Tharunka.