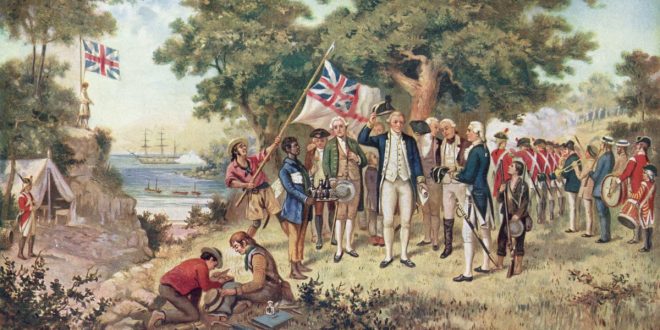 1st April 1770: A print from a painting showing Captain James Cook (1728 - 1779) taking possession of New South Wales, taken from the collection of the Philosophical Institute of Victoria. (Photo by Hulton Archive/Getty Images)

Understanding the Value of Human Life in Australia’s Colonial History

This essay explores Judith Butler’s arguments on the ‘state of nature’ philosophical narrative in order to recognise the structuring and maintenance of valuing human life. With a specific focus on E. Phillip Fox’s oil painting ‘Landing of Captain Cook at Botany Bay 1770’, I apply the ‘state of nature’ to analyse colonial justifications of violence over Aboriginal and Torres Strait Islander peoples within Australia. Additionally, using Achille Mbembe and his concept of necropolitics, I argue that sovereign powers determine the varying degrees of value that lives hold whenever they act in reference to pre-existing authorities determined by their own narratives of history and identity.

Butler’s work confronts questions concerning the value placed on the equality of human life through the philosophical narrative of the ‘state of nature’. This narrative can provide fundamental insights into the political organisation of our contemporary condition. Placing ‘man’ at its axis, the ‘state of nature’ assumes one is born free, independent, self-sufficient and peaceful until another being enters the scene. Only at this point, when another being is present, is he forced to lay claim to his territory. If each individual only wished to seek and satisfy his wants and desires, it would appear almost impossible to maintain a non-violent social order if this narrative were true. It is out of this dilemma the ‘social contract’ emerges within Western philosophy, and so does the framework for contemporary political and social organisation. The social contract requires individuals to give up their individual rights, passing them onto political organisations and state powers. This relationship, at the most basic level, claims to protect citizens from external violence.

However, giving up one’s rights to the government does not immediately guarantee violence will cease to exist. Instead, governments commit acts of violence on the individual’s behalf. When this occurs unopposed, we recognise their power, and sovereignty. In other words, when violence is used by governments to keep violence (perceived or real) in check, the members of that society are in tacit agreement in who the enemy is. It is also through this process that oppressive forms of biopolitical control are developed; and conditions for racism and classism are constructed. Where a group of individuals is seen as a threat to a society, forms of biopolitical control will alter their life vis-à-vis everyone else, be that through incarceration, increased surveillance, and diminished access to social services before they are able to equally participate in society to start with.

To understand how this philosophical narrative transgresses fiction into reality and becomes utilised as a source of authority, I will use Captain Cook depicted in the painting ‘Landing of Captain Cook at Botany Bay 1770” by E. Phillip Fox. Within this image, Cook’s outstretched hand halts the guns of his sailors. This relationship “demonstrates the struggle between those who would champion the need for violence against Aboriginal people and those who would oppose or curtail it’. The central action within this painting is built upon the contemplation of violence towards two Aboriginal men within a landscape. In this scene, Captain Cook represents both the ‘man’ in the ‘state of nature’, and simultaneously, the ‘social contract’. One on hand, he is masculine and strong, independent and free. On the other, within his role as peacekeeper, he represents the advent of a ‘social contract’ and the state power necessary in counteracting anticipated violence. We are encouraged to think that if it were not for Cook, or colonialism, that regressive forms of violence would surface instead. This is the promise of colonial Cook, a sure guide in establishing the ‘correct’ configuration of Australia’.

I pose an additional interpretation of this scene, one which attempts to make sense of the subsequent centuries of injustice and violence Aboriginal and Torres Strait Islander peoples have continued to face since this invasion. That is, perhaps Captain Cook refrains from acting violently on the basis that he does not view the Aboriginal men in the background as his equals. He is therefore incapable of recognising their sovereignty in a philosophical sense, or rather, their self-consciousness, self-capacity, and self-representation. Mbembe offers us, in his work on necropolitics, an alternate explanation on the effects of refraining from violence. He argues “that the ultimate expression of sovereignty resides, to a large degree, in the power and the capacity to dictate who may live and who must die”. Sovereignty, here, is developed through the very tactile effects of violence. For Mbembe, dictating who will live, and who must die, informs and confirms the legitimacy of the state and, in turn, their survival. By not waging a war against the local inhabitants, Cook is depicted as a hero, but perhaps instead, when we think about colonisation overall, it is fair to believe that the Aboriginal men in this narrative ‘pose no threat’, that is, they are considered a population subject to biopolitical control, rather than humans with whom to form meaningful relationships. Mbembe writes: “a fact remains, though: in modern philosophical thought and European political practice and imaginary, the colony represents the site where sovereignty consists fundamentally in the exercise of power outside the law (ab legibus solutus) and where ‘peace’ is more likely to take on the face of a ‘war without end’”. This ‘war without end’ describes the consistent and genuine acts of violence Aboriginal and Torres Strait Islander people and culture have faced. Examples such as assimilation, dispossession, destructions of subsistence, and over-policing easily come to mind.

Mbembe argues that these actions are characteristic of the complete lawlessness which colonisation adopts as it resides not only outside the moral and philosophical imagination of Europe, but by the physical discrepancy between coloniser and colonised: “that colonies might be ruled over in absolute lawlessness stems from the racial denial of any common bond between the conqueror and the native…All manifestations of war and hostility that had been marginalized by a European legal imaginary find a place to reemerge in the colonies’. In relation to Australia, we find a distinction between those lives who further colonial narratives of Australian sovereignty, and those who do not. To understand the authority whereby colonialism justifies itself as the convenor of life and death, we must find it in the reservoir of narratives and cultural imaginary of colonialism, such as the stories surrounding the mythos of Captain Cook. This process is twofold. Fictitious narratives which represent one particular history and identity are favoured, and, these narratives are continuously referenced in order to determine social and cultural identities which justify mechanisms of ‘self defense’ against the ‘other’.

When we allow a state to kill on our behalf, then we recognise this exception to the prohibition of violence as a legitimate form of self-defence not only to our individual selves, but to society, or rather, the extended region of our self. If we continue to allow authorities to curb our anticipated violence with violence, then we accept the fact that some lives are worth sacrificing in order to maintain collective harmony. Butler claims that ‘if the practice remains restricted to an individual mode of life or decision making, we lose sight of that interdependency that alone articulates the relational character of equality, as well as the possibility of destruction that is constitutive of social relations’. By recognising that the Western philosophical ‘state of nature’ narrative leaves out and removes the agency of people of colour, Indigenous peoples, women, gender non-confirming peoples, people with disabilities, and children, then we can understand the shortcoming and limitations of contemporary colonial and Western political and social organisation. With this knowledge perhaps we can develop narratives which actively seek to pressure the legitimacy of colonialism and its violent mechanisms which privilege some groups of people over others.

Butler, Judith, The Force of Non-Violence: An Ethico-Political Bind: The Ethical in the Political, London: Verso, 2020.

[1] Judith Butler, The Force of Non-Violence: An Ethico-Political Bind: The Ethical in the Political, (London: Verso) 2020, 21.