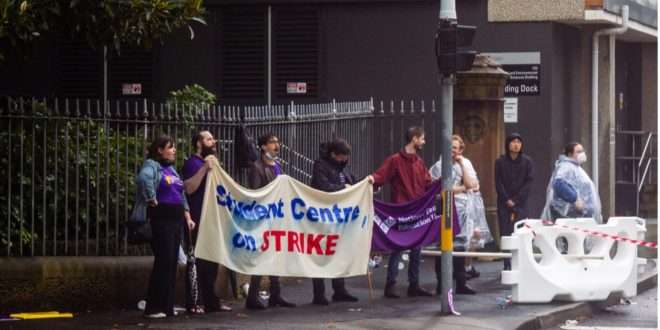 Last week, over May 11-12, hundreds of staff and students shut USyd down.

The University of Sydney was largely shut down Wednesday and Thursday last week as part of a 48-hour strike organised by the USyd branch of the National Tertiary Education Union (NTEU). Several hundred staff and students formed picket lanes blocking entrances at both the Camperdown and Conservatorium campuses, turning back both pedestrians and motor vehicles.

While most classes were cancelled in anticipation of the strike, some proceeded in-person and online. Roaming pickets disrupted these on-campus events, including the annual AGM of UniSport — the governing body of competitive university sport in Australia — which was being held at the Refectory. The overwhelming majority of students chose to stay home, with many of the few that commuted turning away at the picket line. USyd SRC President Lauren Lancaster told Tharunka that the student body were in support of industrial action, “students are here to show solidarity with staff in their fight against the University”.

The strikes occurred in the context of ongoing Enterprise Bargaining Agreement (EBA) negotiations between university management and representatives from the NTEU. Nick Riemer, the President of the NTEU’s USyd branch, told Tharunka that he was “striking so that we can have a fair, non-exploitative, rationally-run university for the benefit of staff, students, and society”. One of the major points of contention is over the NTEU’s push for the de-casualisation of staff. Universities tend to emphasise the benefits of flexibility that come with casual work, but tend to overlook the fluctuating hours, insecure employment, and lack of sick leave and redundancy pay. These factors combine to make casual work precarious, stressful, and demoralising for many staff. USyd has taken little steps so far to rectify this issue themselves, last year only offering 69 positions to the 4173 casual staff it was required to consider for permanent positions under the Fair Work Act. Casuals have also been the victims of significant wage theft across the university sector, including at USyd and UNSW.

Other important NTEU demands include:

Riemer sold the industrial action as a tactic to place pressure on management, “we don’t want to have to strike, but we are forced to in order to make our management listen”.

Students and staff picketed most entrances at the Camperdown Campus, encouraging students attempting to enter campus to turn around in support of the strike. Tharunka understands that while these pickets were largely peaceful, at points become confrontational as individuals tried to drive or break through entrances. Several of these incidents were related to external contractors who stated they had allegedly not been informed of the picket by the university. Police were present at various picket locations, largely operated in a passive, observant role. However, on Thursday at the Ross Street Gate struggles broke out between strikers and riot police as officers tried to escort individuals through the picket. Several members of the Greens Party attended the strike. This included Jenny Leong, the Member for Newtown, David Shoebridge, a former NSW MLC and lead senate candidate for NSW in the upcoming federal election, and Senator Mehreen Faruqi. All three expressed enthusiastic support for the strikes and criticised the increasing corporatisation of universities. Despite traditionally associated with the union movement, no members from the parliamentary Labor Party attended the strike.

If negotiations between the NTEU and USyd management fail to progress, another picketed strike is planned for Tuesday, the 24th of May. Students from all universities are encouraged to attend and support the picket. As noted by USyd Education Officer Lia Perkins, “the conditions of students and staff are shared… staff working conditions are student learning conditions”.