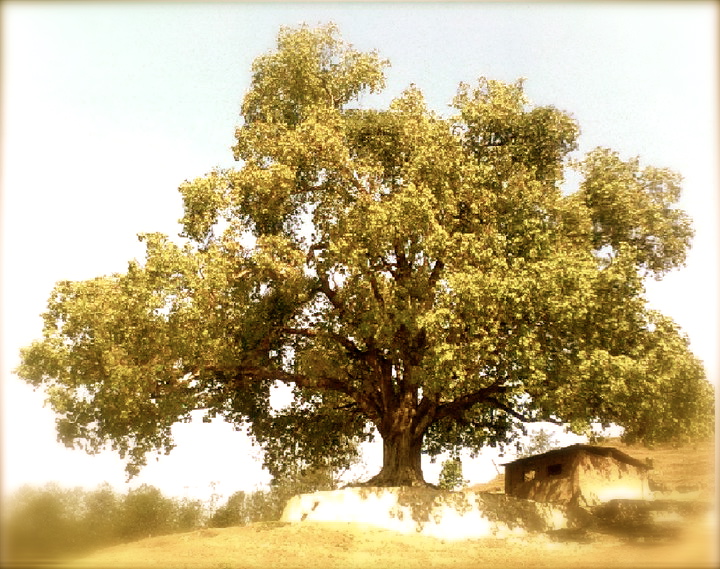 Under the Peepal Tree

The deep voice of the call for prayer boomed throughout the city. I saw Muslim men with their prayer caps, walking towards the mosque. Out of the ten that passed me, eight turned to stare. Their eyes questioned as they slowed their walk, judging me and drawing conclusions as to why I was there. My heart wanted to shout, to scream, to yell ‘I am one of you men wearing their prayer caps, walking towards the mosque. Out of the ten or so that passed me, around! I grew up here, on this land with this soil! That mosque was erected before I took my first breath and my own book of Sikh verses, is written in your language.” But my head knew better. The tightly tied maroon turban on my head with my black backpack spoke volumes. I silently lowered my gaze, as I walked towards the place I once so lovingly called home. My leg began to ache as my limp prevented me from walking too fast; this injury – a physical reminder and scar of the heartache suffered during the 1947 India-Pakistan Partition.

Lahore looked so different, my memories deceived me. Looking around, the city did not seem like the cosmopolitan, progressive Lahore I once called mine. There was heartache and poverty lining the streets and pathways and only one religion was evident amongst the population; a stark contrast to how I grew up. My family moved to New Delhi, ‘India’, in the September month of 1947- fear of violence and brutality in our own home was too much to avoid. We had to leave, we had to move to a ‘secular’ state before religion became our enemy. I still remember the day I told my childhood friends…

“But you will come to visit us, right Gurdev?” my friend, Ali, asked. I looked at him silently, unable to answer him. I was 12 years old when the partition took place, too young to understand the complexities and political reasons behind the division. Two of my other friends, Rajesh and John, also had to leave.

Rajesh jumped off the lower branch of our favourite peepal tree. The fig tree was where we had spent innumerable afternoons that faded to evenings and many Sundays- playing cricket, laughing, climbing or just talking about everything under the sun.

“Of-course he will! We all will be together someday soon, Ali,” Rajesh assured, putting his arm around Ali.

Ali nodded, “Inshallah, we will be together very soon.”

“Jesus brought us together, he will keep us that way!” chimed John.

“Baba-ji won’t allow us to be apart for long,” I reassured.

And this way, we four friends took the names of our respective supreme beings, silently praying to whoever was listening, that despite the bloodshed and newfound enmity, our friendship’s fire would keep burning bright.

I walked on, absorbing every little detail of this familiar, yet unknown, city. I once knew the names of every street that entwined this area; I knew all the shopkeepers and young boys that lived in my neighbourhood. I look at it now, and whilst those same streets still entwine this area, the names have changed, the shopkeepers are no longer those who used to chase us out of their shops, the young boys would be older men now… the memories of childhood friendship long gone from their minds.

So why have I come back here? What is it in the soil of this city that pulled me back? I am across enemy lines, I am in a dangerous position, I am too old to fight for myself… what am I doing here? I guess I came back for the memories, the ones that steal the sleep from my eyes, the stories of which I have told my grandchildren. Lahore; I am a Sikh man from Lahore. That statement is one of the world’s biggest contradictions. I have been told many times that I cannot be Sikh and be from Pakistan. It is impossible. How do I explain to them… that even after moving across the newfound lines in 1947, setting up home in an unknown city, forging new friendships and being told to forget the old, I consider myself at heart, a Lahori.

“Ali! John! Rajesh! See what I’ve got!” I ran towards the peepal tree, my breath catching in my throat. Panting, I saw thee expectant faces. Grinning, I held up a flowing, baby blue scarf.

The three boys jumped off the branches of the tree and came towards me. John grabbed the scarf, covered his head and stood on his toes.

“Oh, look at me, I am a bride!” he said, in a high-pitched voice. The four of us burst into laughter as we pulled the scarf from his head.

Tomorrow was our last day together. John was the first one to leave. His family was moving to Bombay, in “India”. The scarf had been my sister’s, but baby blue was John’s favourite colour.

I wrapped the scarf into a ball and handed it to John, “Keep it. It is to remember us by.”

John’s eyes filled with tears as he held the soft material. With his sleeve, he wiped his eyes and silently climbed up the tree. Rajesh, Ali and I watched as he put in his foot in the familiar nooks and crannies, until he reached the highest branch. His legs dangling on either side of the branch, John took the long scarf and tied it tightly around the dark grey arm of the tree. He then smiled down at us and stood up on the massive log.

“John! What are you doing? Come down!” we yelled, worried for our friend.

“Where will I find friends like you? Where will there be friendship like ours? The whole world will remember the story of us!” John sang, completely out of tune.

I had finally reached my old neighbourhood. I was scared to go in. What would be different? What would have changed? It was no longer ‘mine’; I had no right of claim over it. But I had come so far, it took me five months to receive a visa alone. A million questions arise when an ‘Indian’ national wishes to visit ‘Pakistan’. Taking a deep breath, I continued walking. To my left, I saw three girls, all dressed in their uniforms. Their long pants, long tops and hijabs could not hide their happiness and ease with each other. One noticed me looking and stopped walking, she held her two friends’ hands and, with one eye still on me, turned to walk the other way. There were no questions, no words shared, just assumptions made – in my childhood home, I was an outsider.

Wiping my eyes, as John had that day, I continued walking until I came across a very familiar spot. The small park on the corner of the street that I had once lived and laughed on had not changed. My face relaxed as I walked, my gaze searching for one, unmistakable thing. I smiled when I first laid eyes on it. Standing strong, its height almost doubled after 60 years, was our beloved peepal tree. The years I had spent under or on that tree granted me the ability to know it even with my eyes closed however, one detail helped. On one of its uppermost branches, reaching out and up towards the sky, was a scrap of baby blue – flying and flowing. It had withered, frayed and there was not much of it left – but it held onto the tree branch tightly, unwilling to let go.

I ran my hand over the rough tree trunk and could hear the voices of my three friends calling out to me. That is what I came back for.

Smiling, I whispered the lyrics that have been stuck in my head since August 1947, ‘where will I find friends like you? Where will there be friendship like ours? The whole world will remember the story of us’.

Previous The budget according to Grug.
Next Leard protesters delay mine, vowing to continue fight