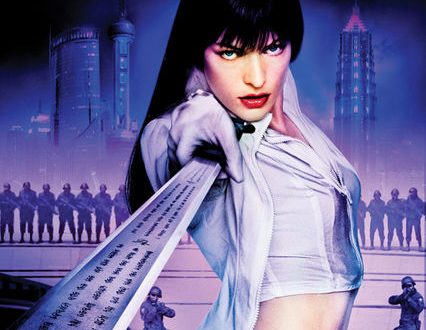 “An incomprehensible and forgettable sci-fi thriller, Ultraviolet is inept in every regard.”
Critic consensus, Rotten Tomatoes.

The 2006 dystopian film Ultraviolet was a resounding flop. In 2019 it has a Rotten Tomato score of a measly 8% and slew of harsh critiques from viewers. Across most review websites there is a strong consensus that Ultraviolet is bad. What I want to know is if Ultraviolet is so bad that it is good. And perhaps there is evidence that it could be. Whilst the overall critical response is abysmal – it has a score of 3.5 stars from over 50 reviews on Google play with one user citing/rhyming, ‘Sexy woman dressed to thrill in body hugging suit and likes to kill. Seriously good movie.’

The premise of Ultraviolet is based upon a blood war between the healthy ‘normal’ humans and the diseased ‘hemophages’ who are the result of a genetically modified infection which causes vampirism, increased strength, speed and intelligence. This war is brought to a climax when a human boy/super weapon is created in a lab with the supposed purpose of eradicating all ‘hemophages’ through some unknown property in his blood.

This highly infectious disease we very quickly learn is called ‘HGV’ or ‘Hemoglophagia Virus’. Yikes. Potentially this could be seen as a hyper-critical commentary on the HIV epidemic of the 1980’s and the discrimination and isolation felt by the gay community. However, the lack of touch, the introduction of vampirism and the overall whitewashing of the film leaves me with a gross taste in my mouth.

The movie begins with protagonist Violet explaining that she was born into a world we might not understand as the camera pans across a CGI cityscape that appears to be made out of playdoh. This opening, despite its unoriginality, is quite fitting as not understanding the plot and laughing at the special effects is a common experience throughout.

We learn that our caucasian protagonist, Violet Song Jat Shariff, played by Milla Jovovich, became infected and lost her husband and unborn child which has lead her to becoming a very angry hemophage who is very good at killing. She performs these killings with various weapons with unexplained and obviously culturally inspired inscriptions which give off the distinct vibe of Asian mysticism on steroids. The film is quite clearly set in an East Asian cityscape and yet the first Asian presenting character with a speaking role does not appear until 27 minutes into the film. Not to mention when they do finally appear, it is within a cultural segregated group that the protagonist labels ‘Blood Chinois’ before starting a hilarious guns blazing, bullet hell which ends in the death of any future cultural representation in this film.

The lack of women in this film is also so tragic it’s often hilarious. The antagonist states, ‘what are you, one woman, going to do against all my men?’ so often it is almost self aware. A huge emphasis placed on this ‘almost’ as this constant ‘woman against the big strong man’ trope is sexualised in the most consistently uncomfortable way. At this point I’m less concerned about the blood war and more worried about my own future as a woman because apparently in the year 2078 the ratio between men and women is 1000/2.

Even if we are to ignore these hugely problematic yet unsurprising realities of 2006 we can’t ignore the plot. Without spoiling the twists and turns which would be so much better if they were a straight line⁠—I can say that the plot sucks. It often feels like the characters are just going from glass building to glass building because someone in the CGI department figured out to simulate glass smashing and they want to show it off.

This movie is all about blood. The disease is spread through blood. People are consistently being cut in half and shot. The main plot tension is trying to figure out what is inside the young boys blood. Yet we rarely ever see blood. I understand that the movie is rated PG13 but the lack of consistency of what draws blood and what doesn’t is hilarious. We don’t see blood as a result of violence until 19 minutes into the movie. In this time Violet has already brutally murdered with both guns and knives upwards of 50 people. It’s often hilariously difficult to tell if someone was actually injured as they dance around the screen seemingly not wounded from the 19 bullet holes in their bodies.

Furthermore, when you do see blood it just makes you think about how stupid this whole film is. We see within the first five minutes that if a Hemophages blood touches your skin you are instantly infected, yet half the time people are fighting without any skin protection other than a pair of latex gloves.

But now let’s move onto the CGI. This is why you watch a 2006 film—especially this one since it feels like the special effects are from about ten years earlier. Whenever any form of post production is in this film it feels like frame rate drops rapidly and you can’t help but laugh. To their credit, they were truly ambitious in the motorcycle chase scene which I think should be memorialised somewhere as the greatest 25 seconds in film history. Watching Violet fly off a roof on a motorcycle which she then drives through an attack helicopter which promptly explodes as she flies towards the camera is a life-changing experience. However, It does feel like they gave up at a certain point. At the beginning of the movie Violet’s hair and clothes constantly change colour through the power of technology for no good reason that I can think of other than to please the aforementioned google reviewer. But by the end of the film it feels like post processing got tired of changing her hair colour and things start to get a bit bland. Something that continues to be amazing throughout the film is the horribly confusing, poorly planned, yet so enjoyable camera transitions. My favourite example of this is when the camera pans inside of the protagonists ear and then exits out of the barrel of someone’s gun. Why? At this point I don’t care because this is like the fourth gun fight and I’m excited that they are switching things up.

So taking this all into consideration:

Is this movie good?

However – is this movie so bad that it is good?

Yes. Do not watch it by yourself – but if you are looking for a stupid movie to watch with a group of friends I urge you to pick Ultraviolet. The mixture of bloodless-bloodbath fights and the horrible CGI which makes cities look like playdoh and glass look like gravel will have you laughing. And if that’s not enough, the plot no doubt will have you arguing amongst each other and wondering why you didn’t just watch The Matrix.

Share
Previous The Sun and the Architect
Next Violent Delights