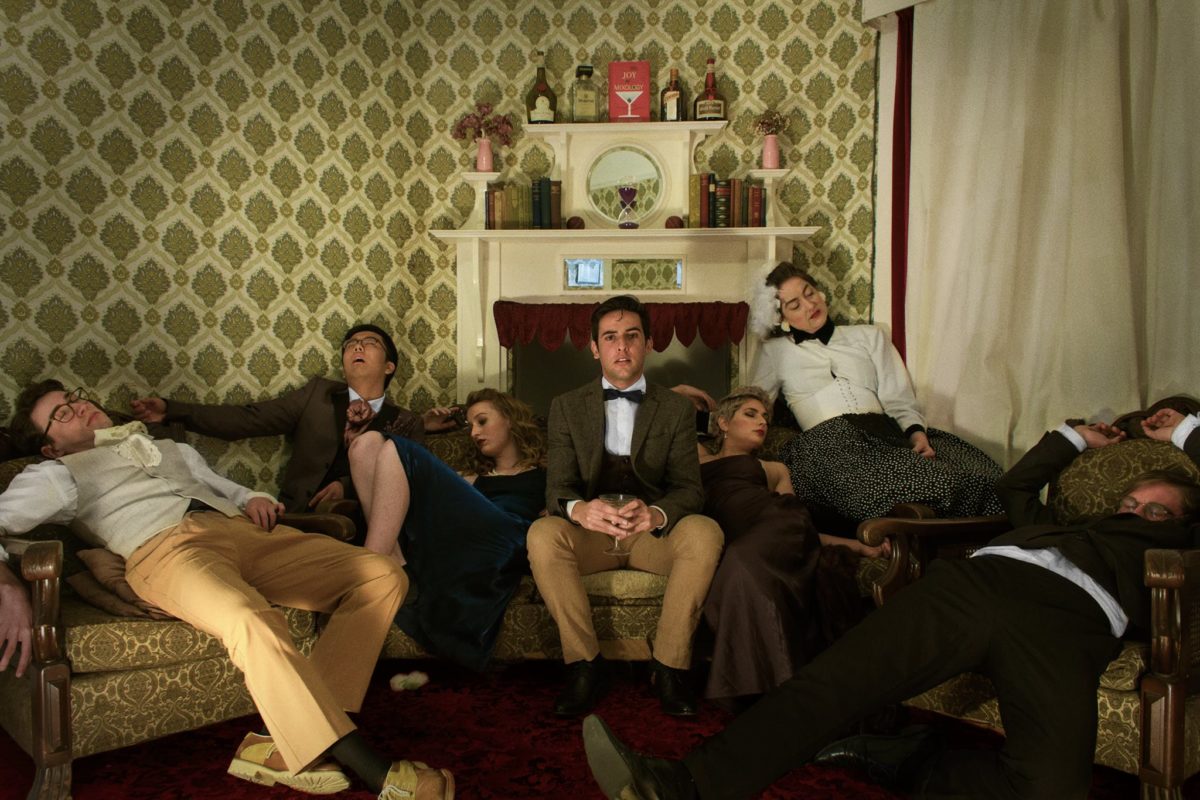 By Sarah Hort and Bella Olsson

Tharunka sent a couple of writers along to NUTS’s latest production, The Cocktail Party, asking them to review one aspect of the show. Sarah Hort focuses on the second half, Bella Olsson gives you a glimpse into the production’s timeless relevance, and the result is: two reviews, one play.

For those hoping for a bit of the whimsical TS Eliot from his collection of poems about cats, The Cocktail Party will leave you feline disappointed. The play centres on a young couple with marital difficulties who host a cocktail party at their London home, featuring strange, eccentric and sometimes mysterious guests.

As with many real-life cocktail parties, the first two acts of The Cocktail Party could be condensed into something a little less … well, long; it is the second half of this play where things begin to really shine. After the interval, the set changes and everything takes a deeper but absurd turn; the host couple is consulted by a man purporting to be a psychiatrist of sorts, who is in cahoots with other guests. The set changes again, back to the couple’s living room, but things are not what they seem; paintings change ever so slightly, the walls begin to move. The party attendees reconvene, but nothing is quite right, and that is what gives this play its character.

There are potential stars here: Michael Giglio, who plays the host husband, Edward Chamberlayne, is brilliant from start to finish. When he needs to be crazed, he is, when light comic relief is needed, he obliges, when characters and scenes need tying together, he gets to work. He is one to watch.

Lauren McNaught as Julia Shuttlethwaite is the dottery but eccentric elderly aunt that spices up every family Christmas gathering. Where others overdo the eccentrics in parts, she gives just enough chortles to pepper things nicely. She also displays a mischievous darkness that we only come to know in the final throws of the play.

It has been said that The Cocktail Party is a reflection of TS Eliot’s dreams. This is especially evident in the second half: things become feverish, male characters begin to become feminine, ideas of psychiatry that are hinted at in the first two acts are heightened. There is meaning here, but not if you look too hard. Come simply as an observer of the human condition, and you will not leave disappointed.

The Cocktail Party is an experience to say the least. At once mind blowing, hilarious, dark, terrifying and thoroughly confusing, it is a nihilistic fever dream that leaves the audience reeling. Director Andrew Signor’s vision is never about realism, or even logic – the harder you try to puzzle out character arcs, the more lost you get. Rather, every aspect of the play is designed to make the audience grapple with reality, and blur the line between truth and fantasy.

Despite being written in the 1940s, the show plays perfectly to a university audience. The themes it examines, that were so pertinent to a wartime generation, feel disturbingly close to home when presented in Studio One. Eliot’s script unwittingly articulates millennial disillusionment with a future poorer, harder, and bleaker than that of their parents: “I don’t in the least know what I am doing. Or why I am doing it. There is nothing else to do: that is the only reason.”

There is a disquieting sense of disconnect throughout the play as well, heightened by the larger than life performances and claustrophobic set. When Celia (Caitlin Adler) resignedly tells us, “They make noises, and think they are talking to each other; they make faces, and think they understand each other, and I’m sure that they don’t,” it rings true to an audience raised on social media and “Like” currency.

Eliot’s writing is beautiful, but it doesn’t carry the show – rather, its real strength lies in the thoughtful and superbly coordinated production elements. From designer Laura Anderson’s phenomenal set that jumps seamlessly from a warm Agatha Christie dinner party to an Alice in Wonderland-like hallucination, to the unnerving use of video in scene changes and eerie soundscape and, of course, some captivating performances from the cast. Lauren McNaught (Julia) and Lyndon Carney (Peter) in particular are the sort of performers that can have the audience in stitches with a nothing more than an inflection or raised eyebrow – they are a joy to watch.

The show is not without hiccups, student shows are rarely are, but The Cocktail Party has a thoughtfulness and intentionality to it that makes it a truly charming, engaging and mildly disconcerting piece of theatre.