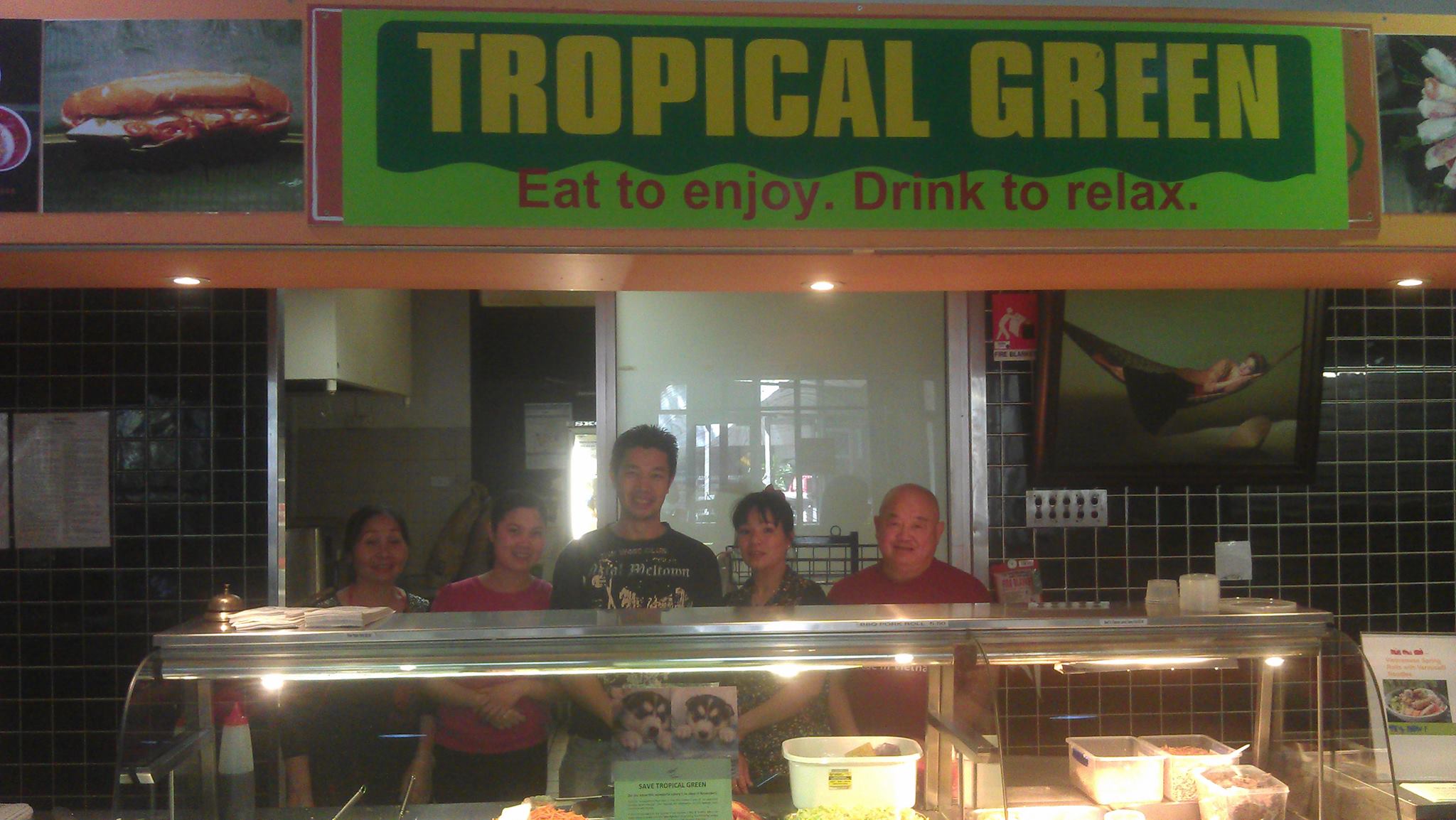 Over six hundred UNSW students have protested en masse the decision by the University to shut down the Vietnamese eatery Tropical Green, which has operated at the Roundhouse for almost seven years.

Best known for its $4.50 chicken rolls, Tropical Green is due to close at the end of November as part of an “approved campus retail strategy” being carried out by UNSW Facilities Management, drawing into question the affordability of food on campus. UNSW student, Will Norton, founder of the ‘Save Tropical Green’ campaign that has attracted almost 1,200 supporters among students and staff, said food affordability on campus will deteriorate rapidly after the closure of Tropical Green due to the lack of healthy, affordable alternatives.

“I wouldn’t eat food on campus after Tropical Green closes down — as a student on Centrelink not making much money, it’s just unaffordable,” he said.

Michaela Vaughan, Arts/Law student, agreed. “We’re university students, and most of us are full time. We can’t afford to have indulgent lunches every day. We know what’s affordable and that’s Tropical Green.

“The choice is really limited, especially when they’re bringing in all these franchises that have inflated prices and market themselves on their brand, rather than their actual food,” Vaughan continued.

The decision to close down Tropical Green follows the arrival of 13 new retailers on campus in 2013 as per UNSW’s retail strategy, 10 of which are chain retailers, such as Subway, Coco Cubano and Max Brenner.

It is understood that the University’s retail strategy, devised in part through consultation with students and staff in the 2011 Retail Survey, aims to acquire the full value of commercial rent from campus retail facilities, estimated to be $1,200 per square metre. At present, Tropical Green operates under a lease wherein rent is $1,450 for the entire premises per week.

“Certainly with the provision of the new retail strategy on campus, there’s a number of retail outlets that aren’t that cheap and healthy. You’d have to say a lot of [Tropical Green’s] food is economical.”

Hannagan confirmed that Arc had considered the possibility of Tropical Green’s closure negatively affecting food affordability on lower campus, but ultimately determined that the continued presence of the second Tropical Green on upper campus Mathews Pavilion would mitigate the loss to students. It is understood, however, that this second Tropical Green does not possess a commercial kitchen for the preparation of hot food as the Tropical Green at the Roundhouse does.

Following the closure of Tropical Green at the Roundhouse, its space will be given to Arc under a minimum 10-year lease for the purposes of using the Roundhouse as a student space on campus for clubs, societies and other Arc activities.

However, according to Tropical Green owner, Lyn, Arc and the University have enjoyed an unofficial relationship for the past seven years wherein Tropical Green has provided its kitchen and services free of charge upon request, both within and outside of business hours.

“[Arc] use this space all the time anyway, maybe 10 or 15 times throughout the year … We’ve always been really accommodating of anyone who needs have a function here, without asking questions and whether or not it means packing up early ourselves,” Lyn said. “We’re really glad that we’ve been given the opportunity to be [at UNSW]. We love it here.”

SRC President, Ross Willing, said increases in rent for retail outlets in the last few years have placed upward pressure on food prices at UNSW. “We’re currently working with Will Norton to help Tropical Green, though it looks like it will be a victim of UNSW’s retail strategy.”

Property Services Manager at Facilities Management, Steven Tropoulos, said the closure of Tropical Green is not a deliberate targeting by the university.

“Unfortunately it’s not an outcome we could have helped given there’s a long term plan for the refurbishment of the Roundhouse. Tropical Green has been on a month to month lease for a long time, and has never been given any security of tenure. In the longer term, that space will be a home for Arc for a student focus on recreational activities.

“We can’t be all things to all people. I appreciate the popularity of Tropical Green, but we haven’t been able to find an alternative space on lower campus,” Tropoulos said.

Tropoulos confirmed that food affordability had been one of the criteria considered when developing UNSW’s retail strategy, but focus groups conducted with students and staff had emphasised value for money, which was ultimately featured in the retail strategy.

Will Norton questioned the lack of importance placed on affordability in the retail strategy. “I understand from the University’s perspective that they want to push new things and raise the quality of food on campus, but I think students should have a place where they can have affordable food. The price of food is generally going up because the University’s charging quite a high rent. That money’s going directly to the University, whereas if the rent was cheaper, those savings would be passed on to students.

“The University’s making money off students paying a lot of money for food, whereas I think the University should be more focused on providing a conducive environment for learning. And by having expensive food, that’s pretty much the opposite.”

UNSW student, Vidya Ramachandran, agreed. “Spending between 10 to 20 dollars on each meal adds up fast, especially when students can afford to work maybe two or three times a week. The Tropical Green owners are very friendly, and it’s more personal than what you get with the franchises.”

Psychology student Artemis said student financial struggles are compounded by the presence of expensive retailers on campus. “The Max Brenner, Coco Cubano, Subway and Boost Juice on campus make me angry, if only for no other reason than that I could never dream of being able to both study and afford them. Their presence on campus is a Catch 22 — I could either work full time and go to UNSW to drink Max Brenner, or I could go to UNSW and study and not drink Max Brenner.”

According to Will Norton, the difference lies in the nutritional value of food at Tropical Green. “Tropical Green has very fresh, very good quality food. It’s hard to find another place on lower campus where they jam pack your roll with so many vegetables and chicken.”

Tropical Green owner, Lyn, told Tharunka the food outlet could continue to operate with a significantly smaller kitchen space in an alternative location on campus, or without a kitchen if it were to only produce chicken rolls and rice paper rolls.

The owners have received only three months’ notice to leave the Roundhouse, and a request to stay on campus for a further year has been denied by Facilities Management. Further attempts for explanation from Facilities Management have allegedly been met without a response.

Tropoulos said Facilities Management has gone “above and beyond” the minimum 30 days’ notice required to notify Tropical Green that its lease would not be renewed.

“This isn’t about taking away optionality and choice; it’s something that happens very commonly off and on the campus. At the end of the day, we’ve given them a lot of notice and explained the reasons. What else can [Tropical Green] expect in terms of courtesy?”

However, Michaela Vaughan said UNSW is failing its students with the closure of Tropical Green. “I think the University has lost sight of the student in the landscape of University life. There should be a greater emphasis on student life, what it is to study here, and knowing that you’ve got to accommodate for the student lifestyle if you want to attract students to come to UNSW. And affordable food is obviously an essential part of that.”

Previous The Three-Year Frenzy
Next Woofy