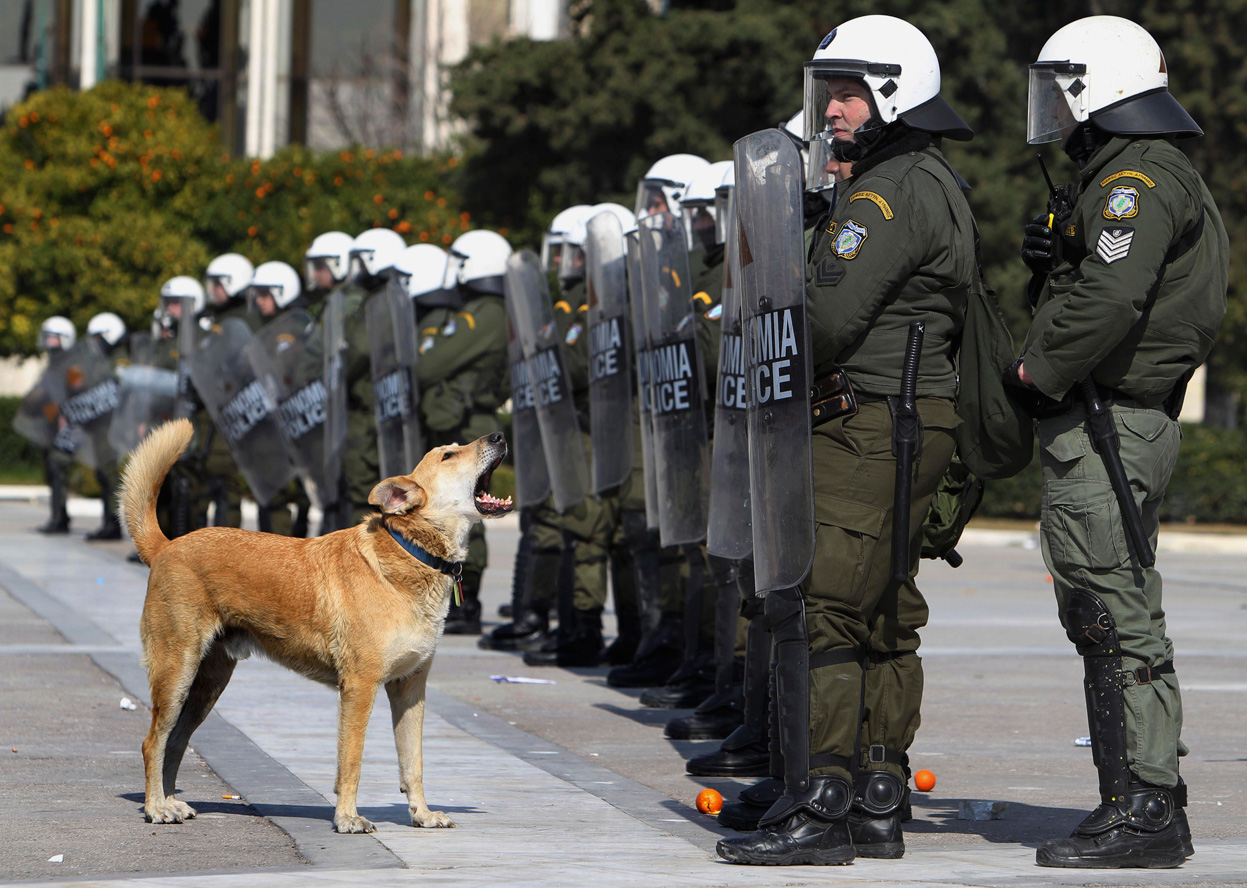 Once simply a tourist destination, Greece—a nation of 11 million people tucked away in the south-eastern corner of Europe—transformed into a media drama in 2010.

For a short time this Mediterranean nation was no longer just the subject of picturesque travel documentaries, unimaginatively titled: “Some Celebrity’s Greek Odyssey”.

Instead mass media were infatuated with Greek politics and its economy, news stories and documentaries obsessed about the euro-buzz word—austerity. If Greece was to default on their loans we were told, this could be the catalyst for the collapse of the European monetary zone. Then in elections in June 2012, Greece satisfied the viewers delivering a coalition of Greek parties that would strive to prevent default. The cameras departed. But the Greeks were left with brutal realities; homelessness, poverty, chronic long term unemployment and huge spikes in suicides.

The average Greek is suffering. The austerity measures imposed on the Greek people means that those who had nothing to do with the initial debt-crisis are the same people burdened by the economic turmoil. They are in huge financial and social trouble. And the situation is only getting worse. Greece Poised Over The Well

At a glance, as the historical narrative goes, Greece entered the Euro in 2001. This allowed Greece to borrow at hitherto unseen interest rates, which fuelled a credit driven economic boom. With that came high levels of government borrowing and government deficits. Times were good for the largely service driven—tourism and shipping based—Greek economy. Then in the late 2000’s things turned sour. A slowing global economy saw tourism suffer and shipping plummet. The crisis arrived in earnest when in 2009 the newly elected PASOK (Pan-Hellenic Socialist Movement) government announced government deficit was not 6% of gross domestic product (GDP) as proclaimed by the previous New Democracy government. Instead it was a staggering 12% of GDP.

Unable to use monetary policy to devalue its currency and stimulate the economy (rates are set at a European level), the Greek economy continued to suffer and its debts mounted. To the point that it became frozen out of bond markets and thus needed a bail-out. The Greek Government needed cash and fast. All to avoid a potential sovereign default on debt repayments, resulting in a withdrawal from the Eurozone and a return to the drachma. So they reached out to the International Monetary Fund (IMF) and other Eurozone countries.

A Life Line In The Dark, A Noose In the Light

In early May 2010, a three year €110 billion loan was granted to the Greeks. With strings attached. Enough strings to hang themselves with. In the form of a series of austerity measures aimed at improving the budget deficit. These involved among other measures, huge cuts to the minimum wage, increases in the age of retirement, public sector job cuts and a hike on regressive tax—the VAT (Value Added Tax—like the GST). These measures were met with massive protests throughout Greece. Athens was brought to a stand still as protesters demanded a more equitable and better negotiated loan, while others called for more radical solutions. Amidst mass protests the Government appealed for patience insisting the situation was soon to improve.

It did not. It got worse.

As the wider economy stumbled and austerity sucked demand out of the local economy, Greek economic figures appeared much dire than originally anticipated by the IMF and Eurozone countries. As a result, greater austerity measures were imposed on the Greek people. By the end of June 2011 daily protests swarmed the streets of Athens and other large Greek cities as the working class buckled under the immensity of the austerity measures.

Voices In The Deep

Finally, in May 2012 a general election was held allowing the Greek electorate to participate in the political process. As a side note, the country’s sizeable anarchist community refused to participate for reasons paraphrased in the slogan “If voting really changed anything, they’d make it illegal”. Ultimately as we will see, perhaps they were right. For those that did vote, the election was billed as a vote on the austerity measures. Pro-austerity parties only managed to acquire a low 30-35% of the votes, sounding a resounding “oxi” (No) to the austerity program. However none of the parties were able to form a coalition to govern, so another election was called for the following month. Still, the austerity measures continued.

In June 2012, Greece held its second election in the space of a month. This time the pro-austerity vote increased to around 45-47% of votes. With the aid of a complicit media, the two parties that have ruled Greece since the end of the military dictatorship in 1974, spread the message that a vote against austerity measures was a vote against Eurozone membership. Yet this was largely untrue. In fact only the Communist Party of Greece (KKE) had called for an exit of the Eurozone. The second largest party, The Coalition of the Radical Left (SYRIZA), instead desired a re-negotiation of the loan deal with more programs to create growth. Further, they believed that Greece’s negotiations should have better capitalised on the fact that the Eurozone was fearful of the flow on effects of a Greek default. But facts and reality are often lost in the savagery of an election.

On the 20th June 2012 pro-austerity parties and bitter political rivals New Democracy and PASOK (plus the smaller Democratic Left party) came together to form a coalition. This of itself was staggering—a bit like the Labor and Liberal party in Australia forming a coalition. Currently governing, they believe they have a mandate to maintain austerity measures and are doing exactly that. And with that, the media teams packed their vans and rolled out. The markets were happy. The Euro powers content. Greece was not going to default (for a while).

The Bottom Of The Well

Yet protests and militant actions continue. For Greeks have to live under the austerity measures. Take the government cut to the minimum wage; by 22%. Now, monthly basic pay in Greece is €570 a month for over 25’s ($685). The Australian minimum wage is $2668 a month. This is made worse in that Greeks work on average 2100 hours per year. Not quite what you’d expect given the industrious Germans pump out 1420 hours and Australians work around 1855 hours per year. In Greece, minimum wage sucks and you work longer hours.

The problem with the minimum wage issue is compounded by unemployment figures. 22% and rising—over 1 million people are currently unemployed. Breaking it down further, for women aged 15 to 34 unemployment is at 32%, and for youths aged 15-24 unemployment is at an immense 48%. This has real practical consequences as poverty and homelessness swells.

Another austerity measure is the axing of over 150,000 state sector jobs over 3 years. Arguably it is a necessity to smash the bloated Greek public sector. Yet according to the International Labour Organisation (ILO), Greek public servants account for a lean 22.3% of the workforce, whereas the French public sector accounts for 30% and the UK’s for 20%. Keeping in mind the chronic unemployment just discussed, this issue is of great concern to many Greek workers.

The austerity measures also forced the Greek government to raise the minimum retirement age for access to the pension from 61 to 63. In context, the EU average age of exit from the labour force is around 61 years of age. Greeks see their pension as something that finally compensates them for low wages and rubbish holiday and other work conditions. Now they have to work another 2 years.

But what appears most frustrating to many protesters is that the unemployed, working class and the withering middle class see themselves suffering most under the burden of the austerity measures. The class dimension to this Greek drama is penetrating. Take the GST (Goods and Services Tax) equivalent in Greece, the VAT (Value added Tax). Across the board it has increased by 2%. That means regardless of your relative income, all Greeks end up paying the same increase on all goods and services. As this has been going on, in the last 10 years Greek ship owners have been exempt from paying tax on a whopping $175 billion worth of income as they consistently threatened to move jobs off shore.

Further, in 2010 tax evasion cost the Greek government over $20 billion. This prompted the head of the International Monetary Fund Christine Lagarde, to say that if Greek parents want to do something for their children affected by the spending cuts, they should just “pay their tax” (Notably Lagarde’s salary is tax free!).

But in fact the average workers mostly do pay their tax, as it is automatically deducted from nearly all non self-employed workers. On the other hand tax evasion is far more prevalent in the self employed sectors—the private doctors and lawyers for example.

As this nightmare continues for so many Greeks, were it that simple that they just pay their taxes. Heaps do. And others just don’t have a job.