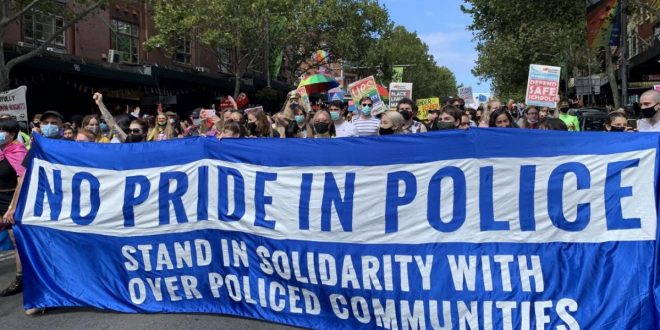 Trans Day of Visibility is for Radical Activism, Liberation, and Unity – Not Empty Corporate Platitudes

March 31st is Trans Day of Visibility; a day to celebrate the trans community in all of its diversity, strength, and resilience. As a trans woman, the day is extremely important to me personally – it strives to empower and ultimately liberate us. Unfortunately, visibility seems to have lost its meaning in recent years, becoming representative of empty corporate platitudes and “awareness” rather than upholding the rich culture of radical activism, liberation, and unity that the trans community embodies.

Trans Day of Visibility gives us an opportunity to reflect on how we can uphold this radical tradition and support the trans community as both members and allies, particularly in light of the 43rd annual Sydney Gay & Lesbian Mardi Gras and accompanying protests.

The 2021 Mardi Gras parade was UNSW’s 4th time participating, with staff and students coming together to celebrate the theme of Rise, showing resilience and solidarity in the face of global turmoil. This year’s theme was more relevant than ever to the trans community. What we must understand, however, is that while it is incredible for trans people and the wider LGBTIQ+ community to be able to celebrate themselves and their identities, we must first address the wider issues facing Mardi Gras and the trans community before everyone can truly feel celebrated.

Facing Mark Latham’s anti-trans education bill, the community at large, the deaths of First Nations trans women in custody, and increasing police violence, the trans community is experiencing more widespread vitriol and bigotry than ever. But with it, has come a resurgence of radical trans resistance.

Protest groups such as Pride in Protest  and Trans Action Warrang have seen immense success across Australia thanks to their militant  approach to activism. Some campaigns include their reclamation of Oxford Street on Mardi Gras as a part of their to fight for trans rights, the decorporatisation of Mardi Gras, police abolition, and justice for First Nations communities.

To truly understand the importance of Trans Day of Visibility and how we can better uphold the radical history of not only the trans community, but Mardi Gras, we must look back at the deep intersection between trans liberation and historical revolutionary movements, as well as how this history has influenced the trans community in the present day.

While many point to the world-renowned 1969 Stonewall Riots as the beginning of radical trans activism, it was three years earlier at Compton’s Cafeteria in San Francisco’s Tenderloin District, the first legally recognised transgender district in the world, that saw the first known instance of collective trans resistance to police harassment. All but forgotten, trans historian Susan Stryker uncovered the history of that night in 1966 – where after years of abuse at the hands of police, the women of the Tenderloin District forced police out of the diner, reclaiming the focal point of the community.

Soon after came the rise of perhaps the two most prominent trans activists of all time – Marsha P. Johnson and Sylvia Rivera, the revolutionaries who became figureheads for the 1969 Stonewall Riots and formed Street Transvestite Action Revolutionaries (STAR) the following year. While Stonewall is widely understood as the birthplace of the modern LGBTIQ+ movement, STAR was arguably more influential for the trans community in its legitimisation of trans identity beyond drag.

Originating from a protest at New York University, STAR was militant from the start – allying with the Black Panther Party and the Gay Liberation Front to create a united front that intertwined the struggles of black liberation, gay liberation, women’s liberation, and trans liberation. Like the Panthers, STAR prioritised improving the environmental conditions of its community above all else. This led to the formation of the STAR House; a 4-bedroom apartment aimed at keeping homeless trans youth off the streets, as well as redistributing goods and services such as food, water, clothes, and babysitting to those in need.

The radical origins of Mardi Gras in Australia began almost a decade later, on June 4th, 1978, one of several protests commemorating the Stonewall Riots, and demanding the same civil rights for Australian LGBTIQ+ people. While the protest was a resounding success for the liberation of Australia’s LGBTIQ+ community, leading to the decriminalisation of homosexuality in 1984, it was met with immense police violence and repression that has continued to this day – albeit more covertly. This, amongst factors such as their ongoing treatment of First Nations people, is why we must firmly reject police presence at Mardi Gras and return to its roots as a radical protest movement. In my opinion, the current status quo is not only deeply disrespectful to the group now known as the 78ers, but also an affront to First Nations and trans people across the country – a milquetoast, commodified shadow of its former glory.

Thankfully, in the present day, organisations such as Pride in Protest and Trans Action Warrang have been established to uphold this legacy of trans radicalism and disrupt the status quo of performative LGBTIQ+ activism, firmly rejecting police, corporations, and conservatives. Protests rejecting Mark Latham’s violently transphobic education bill have erupted across the country in recent months, and Pride in Protest organisers have since been elected to the Board of Mardi Gras – with an upcoming march for Trans Day of Visibility on March 27th. Their demands include ending Mark Latham’s aforementioned education bill, amending NSW’s gatekeeping of birth certificates from trans people, defunding and abolishing the police, and decriminalising sex work. If you want to support the trans community as an ally, are questioning your gender, or are trans and want to stand with your community or just want to meet other trans people, I highly recommend you look out for future Pride in Protest events.

This, above all else, is what Trans Day of Visibility means to me. Yes, we should celebrate, but not the assimilationist image of representation sold to us by alcohol companies, banks, and the police. Instead, celebrate the militant revolutionaries that came before us, and paved the way for the rights we have today; celebrate First Nations trans women and their ongoing struggle for decolonisation and liberation; and celebrate that, as a result, the next generation of trans youth will grow up in a world far more accepting than ours.

If you are trans or gender diverse and looking for support, or wish to learn how you can better support your colleagues and peers, check out the EDI website and Gender Affirmation Guidelines for students and staff.