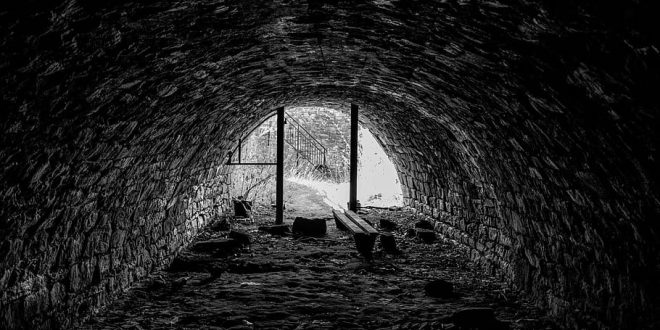 Heishi made the mistake of assuming the day was over.

To be fair, it had been a long day. Junan, her supervisor at the Department of Beastly Affairs, spent hours on end grilling her for the progress on the State Senator’s gaulken, which she had been forced to take home two days ago because, apparently, the State couldn’t afford extra hospital space, even for its own caucus. The gaulken was a proud winged creature with a body of an antelope and a dark, curved beak; this particular one was young and barely tamed. What else are you good for, Deputy? Junan had asked. She hadn’t been able to answer. One more week, Heishi told herself, one more week then she’d finally get what was waiting for her: a promotion as the Director of the Eastern Sector.

At least she had Veko’s dinner to look forward to; the thought made her smile.

But the universe refused to let her rest.

Her first warning sign was the door slamming shut once she set foot into her condo. The second was the sight of Veko in the middle of the room, wide-eyed, half-crouched, face marred with sauce, spatula in one hand, another holding up a finger to hush her.

Identical pairs of dark brown eyes stared at each other.

Heishi’s gaze shifted away from Veko’s to take in the rest of the room. The couch stuck on the ceiling, the hovering vase, the smashed chair, the messy trails and splatters of sauce all over the floorboards and walls and ceiling. Heishi’s gaze was blazing when it returned to its starting place. The wave of dread had disarmed her of her usual calm.

Veko cringed. It was the same face he had pulled when his ‘experiment’ had blown off the ceiling of the room they used to share; he’d gotten away with it. She hadn’t. “In my defence, it was hungry… and it looked cute.” Being more corporeal-husk than human apparently hadn’t changed his risk-taking tendencies.

Heishi swallowed a scream. “Where is it?”

Veko pointed a stiff finger at the barricaded door. The holes in it didn’t trouble Heishi as much as the silence. Gaulkens, like most spirit creatures, were energy in the form of flesh—which was why they weren’t designed to be held captive under any circumstances—everywhere they went, the energy around them grew more volatile. And this one was no different, no matter what the Senator thought.

Heishi edged closer to the door, trying not to do anything that might startle the beast. At a distance, Heishi peered through the hole. Veko’s room was in no better shape than the common room was. The bed was ruined, torn books everywhere… there was no sign of it.

She saw the fractured window and groaned.

“Well?” Veko asked. His words wavered with the outline of his form, flickering between body and shadow. “What’s it doing?”

Heishi turned to Veko, ready for her pent-up frustration to spill from her mouth, but froze. Veko was staring at the ground. She had been too busy to notice that his skin had turned translucent and grey, sharp shoulders curved over his thin folded arms. The sight banished the venom under her tongue.

Veko had learned to draw energy from around him to keep him alive over the years, but shock had rendered him powerless to stop the little force he had flowing out of him.

She sighed, putting a hand on his shoulder. He grew more solid with her touch.  “I’m going to go get it back.”

“No,” Heishi said. “You’re coming with me.” She should’ve known that keeping Veko by her side was the only way to stop him from courting trouble.

They headed straight for the tunnels at the south of the city. They were long out of use; a landslide had wiped out entire neighbourhoods decades ago, so violent that  no one had bothered to reopen the tunnels after that.

Gaulkens had low tolerance of heat. Highland creatures, their feathers and fur were built to weather snow. The tunnels, damp and dark, were the perfect place to hide from the Southern sun. Heishi knew it was unnatural to keep spirit creatures – their constrainment messed with the way  energy moved in the world around them. But Heishi was the last person to preach, ever since she had decided to keep Veko’s spiritual form from leaving the same night their deadbeat father was too drunk to stop Veko from playing near the wires on the balcony.

She kept Veko in close proximity as they ventured in the passageway. Colour and light seeped back into him slowly until he was visible even in the shadows cast by the pipes and jagged ceiling, but the long day and her nerves weren’t doing Heishi any favours in keeping him stable, tethered to her. She could hear power tools, or even worse, wreckers; monstrous machines used to bring down whole structures and absorb all the energy in their wake, whirring into the cores of energy that powered them. She didn’t want to imagine the gaulken hiding in one.

“It went in that way,” Veko pointed to the left opening of the forked split. Heishi tried not to think about how he knew that. Water dripped from above into the puddles and mud and weed and twigs and leaves. “You look tired.”

“I’m sorry,” Veko said quietly. Heishi stiffened. He spoke the words just like that when she found him lying next to the electrical box, skin burned, only seconds left to live.

A series of raspy whistles chased her thoughts away. Heishi and Veko shared a look and started quickly down the path. Their feet fell in time, whether because they were exactly the same height, or because they were so used to being side by side.

The gaulken was trapped in a wrecker. It was tangled in the mass of cords that powered the suction plates, hanging loose at the sides of its metal frame. They were made to survive, even as they tugged the building around them downwards.

The gaulken let out another series of cackles through its pointed beak, amber eyes aflame and its free wing flapping in a frenzy. Not a good sign. The gaulken’s strength could easily tear the cords apart and send the energy rippling through the tunnels.

Heishi motioned for Veko to stay where he was.

The gaulken cackled, hooves kicking and jerking at its restraints as Heishi slipped between the cords, approaching the engine and the gaulken beside it. Her heart raced..

“Hey, you,” Heishi murmured, only an arm away. “Stay still for me?” Creatures spoke in the language of intent and gravity, which was the only language Heishi spoke. The gaulken turned its head, their eyes met, and it snapped at her with its curved beak. This beast will be the death of me, she thought, as she jerked backwards and began to lose her balance.

She was shoved back to her feet; she turned and found Veko tangled in a web of wires beside the core. He had slipped past her, tiny as he was. The wires pulled on him and the raw energy of his exposed spirit. It was he and the gaulken that looked like siblings, trapped in parallel, with Heishi between them.

“What are you doing?” Heishi hissed.

Veko glared back, despite his lowly place. “You would’ve landed on the buttons if it weren’t for me; that would’ve set the core off.” He paused. “I’m stuck.”

Heishi released an exasperated breath. “Let’s get you out.”

Heishi opened her mouth to protest just as the gaulken decided to wrestle its way out, scratching Heishi’s cheek with its wingtip and severing cords in the process. The wrecker began to whine, heat building around them. Veko threw himself over the core, wires tightening over his limbs as sparks and light flickered through his skin.

“No, no, no.” Heishi barely had time to realise what was about to happen. She heard the gaulken screeching as it flew. She leapt to Veko’s side, tried to pull him from the core as the wrecker around them began to creak and groan. But it was too late. Veko was convulsing, fading away.  Heishi couldn’t feel anything as everything went black.

Heishi saw flashes in the darkness. Blurred faces hovering above her. Sirens. Veko blinking in and out of sight—Heishi hoped she wasn’t hallucinating. He must’ve been the one to phone for assistance if they were here so quickly, if she wasn’t dead. She could hear his voice, saying words both foreign and entirely familiar. Nightmare words.

“You can’t hold onto me forever, Heishi,” Veko yelled, “It’s been too long.”

“We’re not having this conversation,” she yelled back.

“You can’t hold yourself responsible for everything,” Veko said.

“If I were home that day, you wouldn’t have left the house.”

“There wasn’t anything you could’ve done,” he said. “I’m sorry for all the trouble, Heishi.”

Veko smiled. “I’ll be around.”

Her nightmare-brother severed the bond and tumbled into the darkness.

He had to be there when she woke. It was all she could think.

Previous Sonnets to Gonski: A Tragedy in Crumbling Verse
Next Del and Aglat #4: It’s a Long Way to the Top