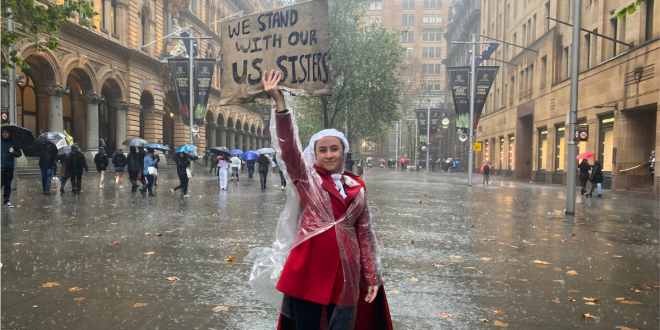 Thousands show up to Defend Abortion protest in Sydney

“Abortion rights belong to everyone but not in the hands of law-makers”, one protester said in an interview with Tharunka.

Despite the pouring rain, thousands of protesters showed up to the Defend Abortion rally in Sydney last Saturday. The rally was organised in response to the overturning of Roe v. Wade, a decision which protected the right to an abortion in the United States.

When asked why she was attending the protest, one woman told us:

“I’m here protesting with my friends for abortion rights in America. It’s really important that we stand up with our U.S sisters and those who have uteruses, even in the rain”.

“Abortion is really important, not just to women, but to trans and non-binary folk, and also to the disabled community. We often can’t have children because of our medication and in America at the moment, people are going without necessary medications just because it causes infertility or risks miscarriage”.

One of the event organisers, Community Action for Rainbow Rights (CARR) is organising another protest this Saturday, July 9.

Previous I like reading. Why can’t I focus when I read anymore?
Next Emily the Criminal is certified fresh