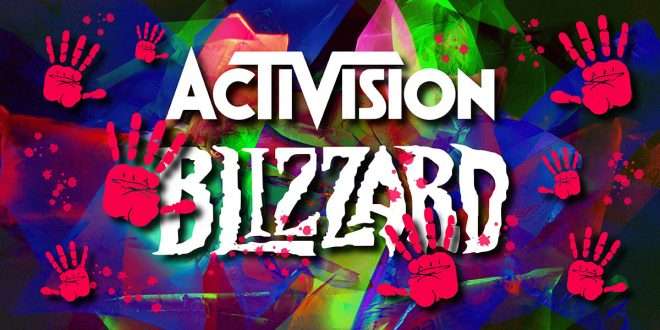 The horrifying levels of abuse and discrimination recently uncovered at Activision Blizzard are shocking, disgusting, but unsurprising. This behavior seems to be endemic in the video game industry.

At the end of July, the California Department of Fair Employment and Housing (DFEH) filed a lawsuit against Activision Blizzard, claiming that it fostered a “frat boy culture” in the workplace. They specifically noted the failures in company leadership to mitigate these issues. ‘Frat boy culture’ doesn’t seem to quite cover the scope of malicious sexual harassment and discrimination present within the company. Executive staff, middle managers, and those in positions of authority are all adults, many of them older, wealthier and considered “industry leaders”.

On the surface, women who work at Blizzard have had to face a lack of career advancement opportunities, unfair compensation and undue firings.

But it gets so much worse.

According to DFEH, female employees (comprising only 20% of the Activision workforce) were subjected to a “pervasive frat boy workplace culture,” including “cube crawls,” in which male employees “drank copious amounts of alcohol as they crawled their way through various cubicles in the office and often engaged in inappropriate behavior toward female employees.” The agency also alleged that female employees who worked on the World of Warcraft team endured consistent harassment where male employees and supervisors “would hit on them, make derogatory comments about rape, and otherwise engage in demeaning behavior.”

The most horrifying finding was the suicide of a female employee during a company trip with her male supervisor, who had brought butt plugs and lubricant. Prior to her death, the employee had been subject to intense sexual harassment, including having nude photos passed around at a company holiday party.

The culture fostered at Activision Blizzard was reported to be one where men get to play video games all day, delegating their responsibilities to others who were then subjected to harassment and bullying.

On brand with the alleged systemic drunkenness during work hours, Activision Blizzard’s responses have been similarly deranged. Not even a day after the lawsuit was filed, a spokesperson from Activision Blizzard criticised the lawsuit and claimed that many of the details were distorted or misleading, dismissing the suit as “irresponsible behavior from unaccountable State bureaucrats”. Although it initially seemed like management were ready to take steps to remedy this unhealthy work culture, an internal email sent by Blizzard executive vice president Frances Townsend seemingly doubled down on the company’s previous statements, reaffirming that claims in the “rushed” lawsuit were “meritless” and painted an “untrue picture” of the company’s culture.

To add insult to injury, CEO Bobby Kotick (who received a $200 million bonus after laying off nearly 800 employees to cut costs) issued a statement that called the company’s initial response tone deaf, but then went on to hire the services of law firm WilmerHale to review company policies and procedures. WilmerHale also happens to be the same firm helping Amazon prevent its workers from unionizing.

In response, over 3000 former and current employees rallied together and endorsed an open letter that criticised the company’s statement, calling it “abhorrent and insulting” and declaring that they no longer trusted the company’s leaders to place employee safety above company interests.

Employees followed through with a walkout. The walkout demanded four major changes including; an end to private proceedings to settle disagreements between the company and employees, adoption of policies to improve employee representation at all levels, a task force to audit the HR department and executive staff, and making executive future bonuses contingent on diversity and equity milestones.

The Activision Blizzard case only scratches the surface. Similar stories of abuse, ranging from the reported environment at Riot games where women aren’t promoted for fear of pregnancy, to Ubisoft covering up workplace abuse, have been raging for years. Although it’s great that some of the trash has been taken out; for instance through the resignation of J. Allen Brack (former Activision Blizzard president), and three senior Blizzard developers caught posing with a framed picture of Bill Cosby, it’s not nearly enough.

The reality is that this is an industry-wide problem. One that doesn’t seem to be going away.

Companies like Ubisoft and Activision may exemplify this, but developers from “AAA” to indie companies have been saying the same things for years – that the hateful attitudes and mistreatment of workers is systemic across all of video game creation.

For decades, the game industry has been allowed to fester, dominated by men who will not be

questioned nor disciplined, allowed time and time again by company executives to get away with anything, up to and including sexual assault.

Employees who do work hard are passed over time and time again for career advancement, while the lion’s share of profits flows into the hands of executives in the form of millions of dollars in salaries and more in bonuses.

This entire industry is desperately in need of accountability. Not just minor pledges to do better, as some people in Activision have said. Some media outlets and streamers have ceased coverage of Activision Blizzard games, but this is a far cry from a united games coverage front that is needed to hold corporations accountable.

It seems that the solution for those closest to the industry might be unionization, in order for employees to have some protections enshrined by law. The work of global grassroots movement Gamers Workers Unite (alongside existing labour unions and organisations), have been crucial to opening the avenues to have empowered workers. Their organising directly challenges the widely reinforced “labour of love” myth, pervasive in the games industry, where workers are pushed to make sacrifices for the privilege of being able to do what they love. Alone, people who work on video games have no protections, are often not compensated fairly, and are not even guaranteed to be credited if they leave projects.

As someone who grew up with video games and has relied on them to get through lockdown, there’s a part of me that doesn’t want to hear about any of this so I can go back to unquestioningly consuming content. One excuse that I’ve constantly returned to is the fact that abandoning games from negligent companies discounts all the work people spent years of their lives creating. All their efforts to share their creative work shouldn’t be ruined by a handful of dipshits.

But this excuse is growing thin after hearing so many stories of corporate excess and facing numerous examples of systemic abuse embedded in the industry. We need to shake the uncritical mentality of willfully ignorant consumption.

While the onus is not entirely on the consumer, it does nothing to support change in the industry by continuing to play their games while they perpetuate a toxic work environment.

We cannot simply forget about companies’ horrifying levels of systemic discrimination and abuse as soon as it’s out of the headlines.

As consumers, we have a responsibility to hold those in power accountable.

As my mum continues to say, “take out the trash before you play video games.” As inconvenient as it may seem, I think it’s something worth listening to.