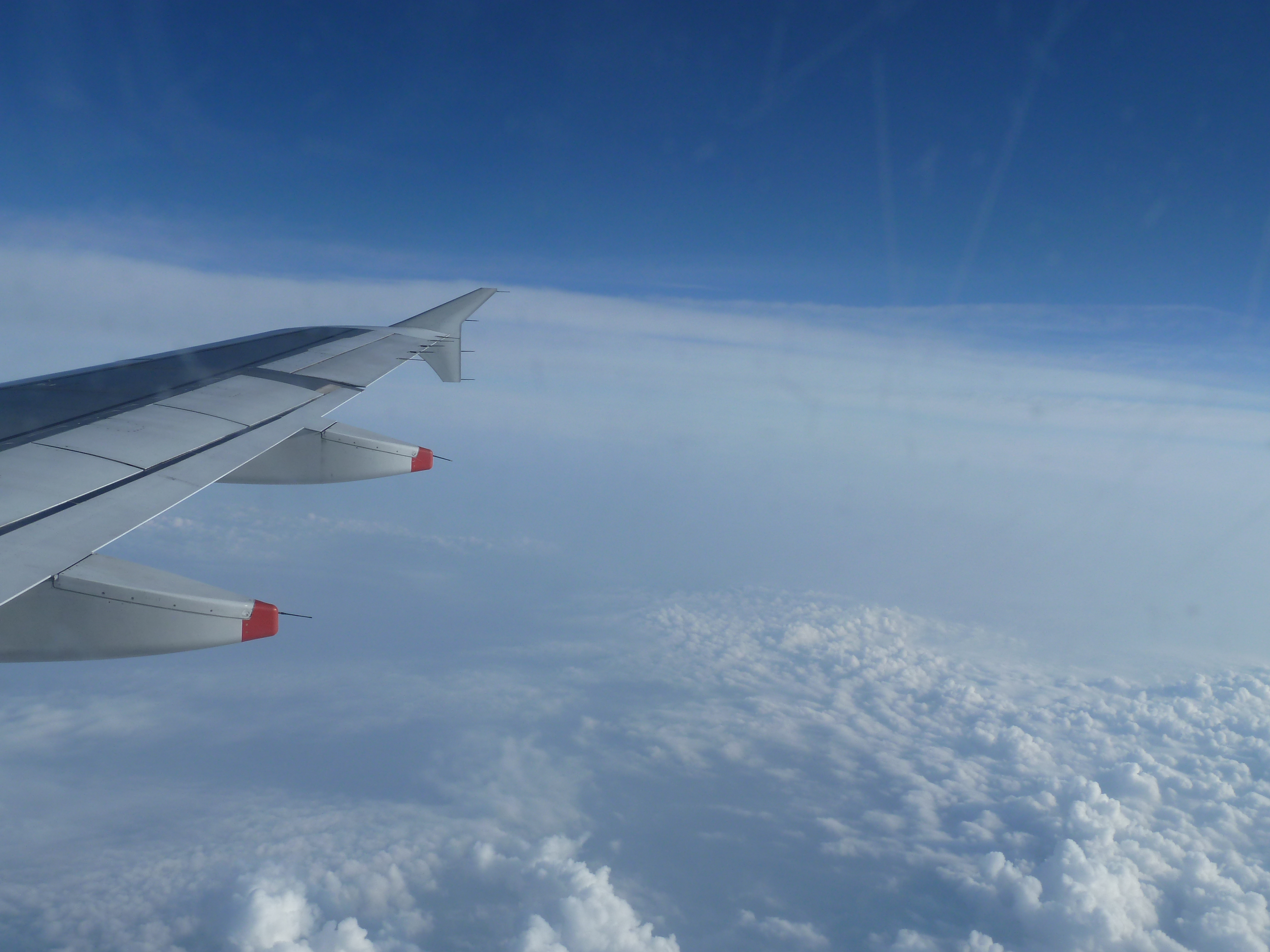 Panic Attack on a Plane

The Travel Diaries: From Moscow With Love

“So what actually is up with them?” my classmate Sophie wondered aloud, as we packed away our laptops at the end of class. “They’re basically trying to take over the world, hey?” The subject of this musing (and our conversation) was the great nation of Russia, where I would be visiting in a few weeks over university break.

“I cannot forecast to you the action of Russia,” I sagely replied. “It is a riddle, wrapped in a mystery, inside an enigma.”

Just kidding. It was Sir Winston Churchill who famously described Russia that way in 1939, only a few months into the second World War. What I actually said to Sophie in 2017 was probably something along the lines of “Uh …yeah, I think so.”

But Churchill’s quip would have been apt; seventy-eight years later, it is still a fairly accurate description of how the outside world perceives Russia. Mention the country’s name to anyone today and the conversation is likely to jump straight to rigged elections, scandalous video tapes, suspicious politician deaths and the plethora of videos available in the “Russians-involved-in-insane-and-inexplicable-situations” YouTube genre. Russia is still very much an enigma and I was excited to catch a glimpse behind the “Iron Curtain” and learn something new about life in modern Russia.

After sketching out our itinerary, the first stage of the journey for my travel buddy Joanna and I was to procure a compulsory “invitation letter” from our hostel, fill out a lengthy online application, and wait for our visas. As I stood in the Russian consulate, submitting my documents beneath an enormous scowling portrait of Vlad the Putin, I worriedly thought of all the reasons I might be rejected. I had cross-checked arrival and departure dates obsessively and had even gone so far as to ditch a pair of craft scissors on the way to the consulate, for fear of being immediately labelled a threat to national security. But the immigration officer nodded, handed me my receipt, and within a week, I was on a plane to Moscow.

On our first evening, we left our hostel (which could more accurately be described as a two-bedroom apartment with bunkbeds, and what seemed to be a resident cyberhacker) and walked up Tverskaya, one of the longest streets in Moscow. It led, as all roads in Moscow do, to the vast, dominating Red Square. “Everything in Moscow is so big,” we agreed, as we cast our eyes across the colossal Kremlin compound, past the colourful, fairytale-esque St Basil’s Cathedral and down the length of the grandiose GUM department store, commissioned by Catherine the Great in the late nineteenth century. The city centre in Moscow seemed to be scaled up: wide streets, huge white stone buildings and intimidating, twelve-foot tall iron gates. However, it was also beautifully dotted with sculpture and artwork, strikingly clean, and the continuing glow of soft summer sunlight late into the night gave the city a relaxed and festive atmosphere.

Considering that neither Joanna nor I had really known what to expect from Russia, we were feeling like total pros by our third day in Moscow. We immediately took to local cuisine staples like dumplings, hot pies and kvass (fermented bread drink – better than it sounds), which surprised us both. The Cyrillic script began to look less like Wingdings and more like actual words, and the Red Square became a nice spot for a stroll in our local neighbourhood. An obligatory trip to a vodka museum had even given me a new appreciation for the spirit’s diversity and versatility beyond the always classic Smirnoff Ice.

What we had initially interpreted at the airport as possible disdain for clueless foreigners, it turned out, was just the Russian way. “A smile from a Russian is a genuine smile,” Luisia, our “hostel” owner, assured us. “We do not smile just for no reason.” Luckily, we found that most Mosovites we encountered were kind, patient and mildly interested in us, rather than annoyed, as we stumbled through conversations with a few weak “spesibas” and “privets”. We were joyously on the receiving end of some sweet, Genuine Smiles™ in no time.

Moscow is a modern city, packed with art galleries, cool cafes and underground bars blasting music late into the night. However, the city is also full of centuries-old artistic and architectural gems, often in the most mundane of places. Among the most spectacular sights in Moscow were the thirteen original underground metro stations, built in 1935 as a way to bring beauty and art to the masses, and reflect “svetloe budushchee”, the USSR’s “radiant future”. The stations are all individual works of art, likened to the Palace of Versailles, and feature marble arches, chandeliers, sculptures, stained glass panels and ceiling frescoes. The city’s pre-Soviet religious history has also survived; the skyline is dotted with the glimmering gold domes of Orthodox cathedrals, belltowers, and mosques, and many incredible neo-classical interiors have been preserved perfectly, despite their new role as supermarkets or bookshops.

Having only visited one country prior to Russia in which there was a successful communist revolution (China), I was surprised at the survival of so many religious buildings, even within the Kremlin. Just beyond the Moscow region is what is known as the “Golden Ring”, a collection of ancient towns, most of which are home to grand monasteries. Joanna and I visited one of Russia’s largest monasteries in Sergiev Posad, the Trinity Lavra of St Sergius, and between marvelling at the detail of the cathedrals and watching the town locals fill up on holy water, I could only be thankful that such places had survived.

Despite the survival of pre-communist tradition, however, it became quickly apparent that Moscow was a city not only shaped by its Soviet past, but actively nostalgic for it. And this nostalgia influences its public spaces, contemporary design, and even food outlets. Much like Starbucks in the USA, almost every other corner in Moscow has a “Varenichnaya”: a chain of family-friendly restaurants styled to look like a retro Soviet living room, complete with huge bookshelves, propaganda posters, and black-and-white Soviet films playing on every wall. Likewise, at the luxurious GUM department store, nostalgic Russians skip the Häagen-Dazs and form long queues to buy stakanchik, a cheap and simple Soviet-era style ice cream, considered across Russia to be the most superior. Even the so-called “Fallen Monument Park”, which became a spooky dumping ground for statues of Soviet leaders upon the regime’s dissolution in 1991, now resembles a chic outdoor sculpture garden, where guests can enjoy an afternoon stroll between dozens of Lenins, Sverdlovs and Stalins.

The strength of this nostalgia is sometimes surprising given the many reminders of the USSR’s more brutal years still standing in Moscow today. Just across the street from a huge children’s entertainment centre is the infamous ex-KGB secret police headquarters and down the road, next to a Varenchnaya outlet, is the building in which Stalin-era interrogations would take place, and out of which many would never return. Even though the country went through a rigorous “de-Stalinisation” process in the 1960s, his body still remains buried next to Lenin’s mausoleum in the Red Square, and tourists can still get a snap with grinning impersonators hanging around outside the Kremlin.

At the end of a walking tour around these sites and their tragic histories, our guide Maria stopped and said to the group, “You may be wondering about our government these days. We call it a democracy, but many think it is more like a Putinocracy. We don’t need to guess who will win the elections, we already know.” The group tittered nervously, glancing at each other and wondering if the secret police were about to swoop down upon us. “Under Stalin, I would be immediately sent to the gulag for that joke,” Maria explained. “And you would be too, for laughing at it.” She paused. “But I have hope for Russia. There is a younger generation of Russians now, who see things differently and I think that there are good things to come.”

It would be crazy to claim any real understanding of the future of a nation of 144 million people based on short trip to the capital city, and the Putinocracy continues to be a concern for those on the outside looking in, but Maria’s message of hope has stuck with me. Perhaps there’ll be a world take-over, or another revolution, but who’s to know?

Russia is still a total riddle to me. Just one that’s a little more familiar.