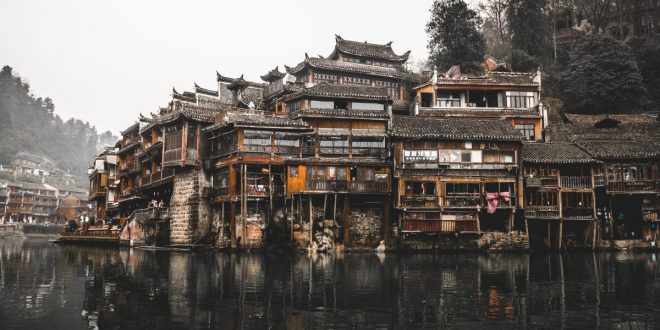 The Rivers of China, by Jack Zhou

The Rivers of China
by
Jack Zhou

With China’s publication of its First National Census for Water in 2013, it became known that 28,000 rivers – a total basin area of almost 3 million square kilometres – appeared to have dried up and vanished. This remains an especially worrying figure as no more than three decades ago there were roughly 50,000 of these rivers all throughout China.

Year by year, this problem demands greater attention, and by 2019, the number of rivers is likely to have diminished even further. The Chinese government blames their dwindling water supply on the accelerating rate of climate change. However, experts and ecologists believe it has just as much to do with the rapid industrial development of the country, poor government management and unsustainable groundwater extraction.

Water scarcity poses a critical problem for China. According to the United Nations, China is among the top 13 countries most affected by it.  The Yellow River is shrinking in size and the Yangtze may run out of water because of the great numbers of damming and reservoir projects that’s volume overtakes the natural flow of the rivers and thereby exhausts them.

This has already happened to a host of rivers in China’s north such as the Yongding. Some of the dryer northern parts, such as Beijing, had previously relied on reservoirs rather than a steady stream of water meaning droughts in the region are not uncommon.

However, one of the greatest challenges posed is that the Chinese government’s solution seems somewhat untenable. In 2018, the South-North Water Transfer Project began operating after decades of development and amassed billions of dollars in total costs. This was an ambitious project to channel water from the Yangtze in southern China towards the north. It is the largest dam canal system of its kind, however, China’s rivers will further buckle under the weight of such a colossal, water-intensive project. The canals only divert the water but the total volume of the river itself is running dry.

This is certainly not the first time China has faced problems with its rivers. On a grander scale, China’s relationship with its Great Rivers – the Yangtze and the Yellow River – is essential to their historical and national identity.

The story goes that over 3,000 years ago, China was at the mercy of the Great Floods. Each year, the river flooded so intensely that the early kingdom was almost wiped out. The common people suffered as their towns were destroyed, and famines became rife. Attempts to dam up the flood had failed. Then, a nobleman called Yu the Great, devised a solution. He began the arduous task of channelling the rivers and building thousands of canals, diverting the floodwater to the surrounding fields and towards the sea.

Though a noblemen by birth, he laboured with the common people for years, until the floods were at last controlled. The taming of the Great Flood is China’s central myth, just as the Flood in Genesis is key to the West. China, in many ways, owes its power and prosperity to this initially fraught relationship with the natural world.

So why look to ancient history? Even with a gap of over three thousand years, China faces the same primordial challenge, though now, it is the effects of climate change that threaten to deplete its rivers entirely and could ultimately destroy the nation itself. But the story also speaks to the ingenuity and enterprise of the Chinese: their tenacity and refusal to shirk from any challenge.

Naturally, China relies on its rivers to this day. But as more and more rivers dry up, and as groundwater becomes scarcer, they are now beginning to feel the effects of a severe water crisis.

Dams are left bereft of water and plateaus are found completely empty. Residents have found thousands of dead animals awash in the Huang Pu River.  Images like these show the other side of China’s modern industrial success story. Former Chinese premier Wen Jiabao has even stated that this water crisis will threaten the survival of China itself.

The audacity and enterprise of China may prove to be its own undoing. The enormous success story of their past few decades will quickly face diminishing returns as its environmental depletion accelerates. Their focus on maximised and constant economic growth could end in catastrophe.

So is there a solution to this imminent crisis – a solution as monumental as Yu the Great’s? Although the story is more myth than fact, Yu is revered by the Chinese for all the qualities which are needed to face a problem of this dimension: ingenuity, vigour and self-sacrifice. It may seem to us that China already has much of the first two. But of the third, we must ask whether they are willing to sacrifice the yearly economic growth they crave for their own future survival. The choice may seem obvious to us, but the Chinese government has done little in terms of preservation and sustainability.

China remains the oldest continuous civilisation in existence; there is a deep historical bond spanning almost 4,000 years. Because of that, it has survived nearly every kind of disaster known to fall upon human civilisation – war, famine, earthquakes, floods, just to name a few. But climate change and ecological destruction present a multifaceted predicament which defies a simple or comprehensive solution.

It would take the cooperation and concerted efforts of international and domestic agents; government, NGO and corporate actors; scientists, engineers, conservationists and local communities. It would take a greater level of transparency on the part of the Chinese government and a serious re-examination of their development plans surrounding their rivers.  This time, survival is still unwritten in history.

Bio: Jack is an Arts/Law student with an enormous passion for history, literature and politics. His main interests are pre-modern Asia and Europe. An ardent believer that we can learn from history, he has tried to make it the subject of deeper conversation.

Share
Previous Why Seeing Vegan Food At UNSW Gets Me Excited, by Michael Dello-Iacovo
Next Well-Oiled Lies: The Hypocrisy Of Justin Trudeau’s Environmental Politics, by Crystal Ji