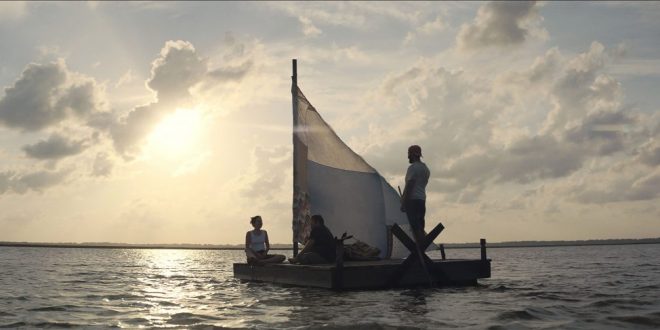 Directors Tyler Nilson and Michael Schwartz make their feature film debut with The Peanut Butter Falcon, a funny, poignant dramedy that beautifully explores ideas about disability, loneliness and human relationships. While the simple buddy tale is not in itself ground-breaking, the brilliant casting and refreshing frankness provide the unexpected edginess which makes this modern Mark Twain adventure story such a satisfying watch.

Zak (Zack Gottsagen), is a 22-year-old man with Down syndrome living in an aged care facility against his will. As a wrestling fanatic, Zak spends his days watching old VCR tapes of his idol, the Salt Water Redneck and imitating his “badass” wrestling moves. Although he is popular, and well cared for at the facility, Zak has bigger ambitions for his life than to live in an institution amongst the elderly. Zak’s adventure begins when, lubricated with hand soap and dressed only in his baggy underwear, he slips through the bars in his window and into the free world. Zak begins his journey down the coast of North Carolina, determined to reach the wrestling school run by his beloved Salt Water Redneck. Zak quickly procures the help of Tyler (Shia LaBeouf), a fisherman and small-time criminal. Tyler is also on the run, fleeing from the increasingly dangerous feud he has found himself in with the redneck crab fishers who muscled in on his deceased brother’s fishing plot. Throughout their journey, the unlikely pair are desperately pursued—and later joined—by Zak’s carer, Eleanor (Dakota Johnson).

Gottsagen gives a brilliant and heart-warming performance here, in a story centred around Zak’s experience, and told from his perspective. The Peanut Butter Falcon does well to empower Zak with agency whilst also conveying the subtle and more overt ways that he is stripped of it, even by those with the very best intentions. Johnson plays the role of the college-educated, overprotective carer with stunning sincerity. Although her love for Zak is obvious, Eleanor’s tendency to mollycoddle Zak is, as Tyler points out, often as damaging as the discriminatory slurs that have tainted Zak’s life by downplaying his many abilities and limiting him to a life of feeling “less-than”. On the flipside, LaBeouf inhabits the role of the lawbreaking, moonshine-drinking, gun-wielding delinquent with the alarming, though affectionate frankness we might expect from somebody who has no plans to wrap Zak in cotton wool just because he has Down Syndrome. However, while Tyler’s genuine love for Zak is made clear by the smattering of deeply tender moments between the pair, Tyler undeniably lacks the ability to protect and support Zak when he does in fact need it. This constant sparring between the over- and under-protective caregivers lets us in on Zak’s experience of being underappreciated, misunderstood and disempowered in subtle—albeit often well-meaning—ways.

Despite their many imperfections, it is impossible not to become deeply invested in the lives of Zak, Tyler and Eleanor, three characters whose lives have been marred by grief and loneliness. Nilson and Schwartz strike the perfect balance between showing glimpses of the characters’ pasts and anchoring the film strongly in the present. Although the story of three wounded souls letting go of the past and becoming unlikely companions may seem run-of-the-mill, Nilson and Schwartz fill their film with an edginess so seamlessly performed by Gottsagen, LeBeuof and Johnson that it does not feel as laboured as it could have. It is through watermelon helmets, a jar of peanut butter and a pair of fluffy handcuffs, that an imperfect but gorgeous surrogate family is formed.

Also impressive is the unique visual and auditory strategies used by Nilson and Schwartz use to establish a concrete and detailed setting. The twang of bluegrass banjo anchors us in America’s Deep South, while the watery landscape of North Carolina’s Outer Banks is evoked vividly, through an abundance of wide angle and overhead shots. The absence of notable landmarks and the overexposed colouring imbue the film’s aesthetic with an uncanny mysticism (think Tim Burton’s Big Fish). This enables the story to take on a magic realist edge, transforming the travellers’ raft and the river it floats down into a peculiar world governed by its own spiritual and moral codes.

Previous Diaspora Diaries
Next A Welcome Parasite: Changing the Face of White Hollywood