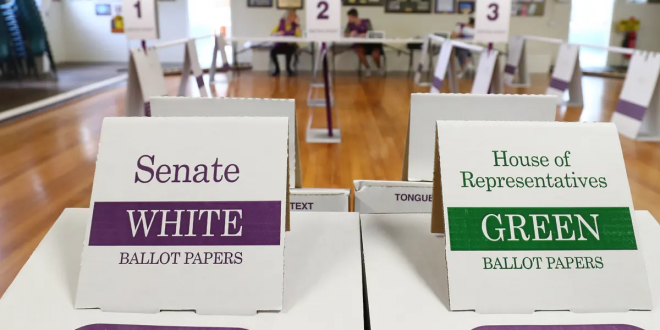 The only how to vote card you need!

First time voting? We explain how the preferential voting system works and break down the difference between the House of Representatives and the Senate!

Death and Taxes, the two unavoidable things in life. Well if you’re an Australian citizen there’s a third; voting, which is FAR more enjoyable.

Any Australian citizen older than 18 and enrolled on the Australian Electoral Roll has the responsibility to vote on the 21st May 2022. The ultimate game of Origin between the Blues and the Reds.

This is a step by step guide for new voters on how to vote, what voting system Australia uses and what’s the difference between the House of Representatives and the Senate.

What voting system does Australia use?

Australia uses the Preferential Voting System, also known as Single Transferable Vote. There are many different types of voting systems, one of the most widely understood is the First-past-the-post voting which is used in USA and UK. In this system, voters choose one candidate to vote for. Your vote gets counted once, so if you vote for a minor party which doesn’t form government in the USA or UK, your vote is exhausted when that party does not have support.

Whereas in Australia when you vote for the House of Representatives and the Senate, your vote can flow through to other candidates.

When you vote for candidates for the House of Representatives and the Senate you will number them in accordance to your preference. The votes are then counted for all the first place preferences, with the goal to reach majority (minimum 50%) of the vote. Major parties rarely achieve majority votes alone, due to the crowded candidate list, but in the Australian system, there are no wasted votes!

If you vote for a minor party as your first preference, your vote will be transferred to the next preferenced party you voted for. Your vote then continues to be transferred down your list until it helps a party (most likely a major party; Liberal or Labor Party) achieve majority.

So what is the House of Representatives

The House of Representatives is elected every three years, the last being 2019’s federal election.

So what does the House of Representatives do?

The House of Representative is the beating heart of Parliament, they have a variety of functions which include;

So what is the Senate

The Senate is the Upper House of the Australian Parliament, it is easily identified by its Red colour. The Senate is made up of 76 senators, each state gets 12 senators and territories get 2. State senators have 6 year terms, every 3 years 6 senators positions are up for election.

So what does the senate do?

The Senate is a house of review, if the House of Representatives is you planning a sleepover with your cousin the Senate is your mum, you have to get her approval before you can do anything. Before a Bill becomes law, it has to be approved by the Senate before the House of Representatives can enact it. The Senate and Senators keep their states interest at heart, and keep Government accountable.

So Above or below the line?

The Senate ballot can be overwhelming! It’s a massive piece of paper which is split horizontally listing the parties at the top and below the candidates up for senate. You can choose to vote above or below the line, but what does this mean?

It is important to look at party preferences when voting above the line.

Below the line voting works if you have a preference for specific individuals over parties. You might like the third candidate of a major party but not the first two, so you can vote below the line. You have to place your preference for at least 12 candidates from across all the parties.

If you make a mistake, you can ask the Polling Officer for another Ballot. You will have to return your original ballot to receive a new ballot so don’t throw it away.

Voting in Australia is complex but it is so important. If you are confused about how to vote, check out this video from the ABC that explains preferential voting!

Previous What is a hung parliament and what does it mean for me?
Next Student sues UNSW and others for defamation after accusations of serious misconduct