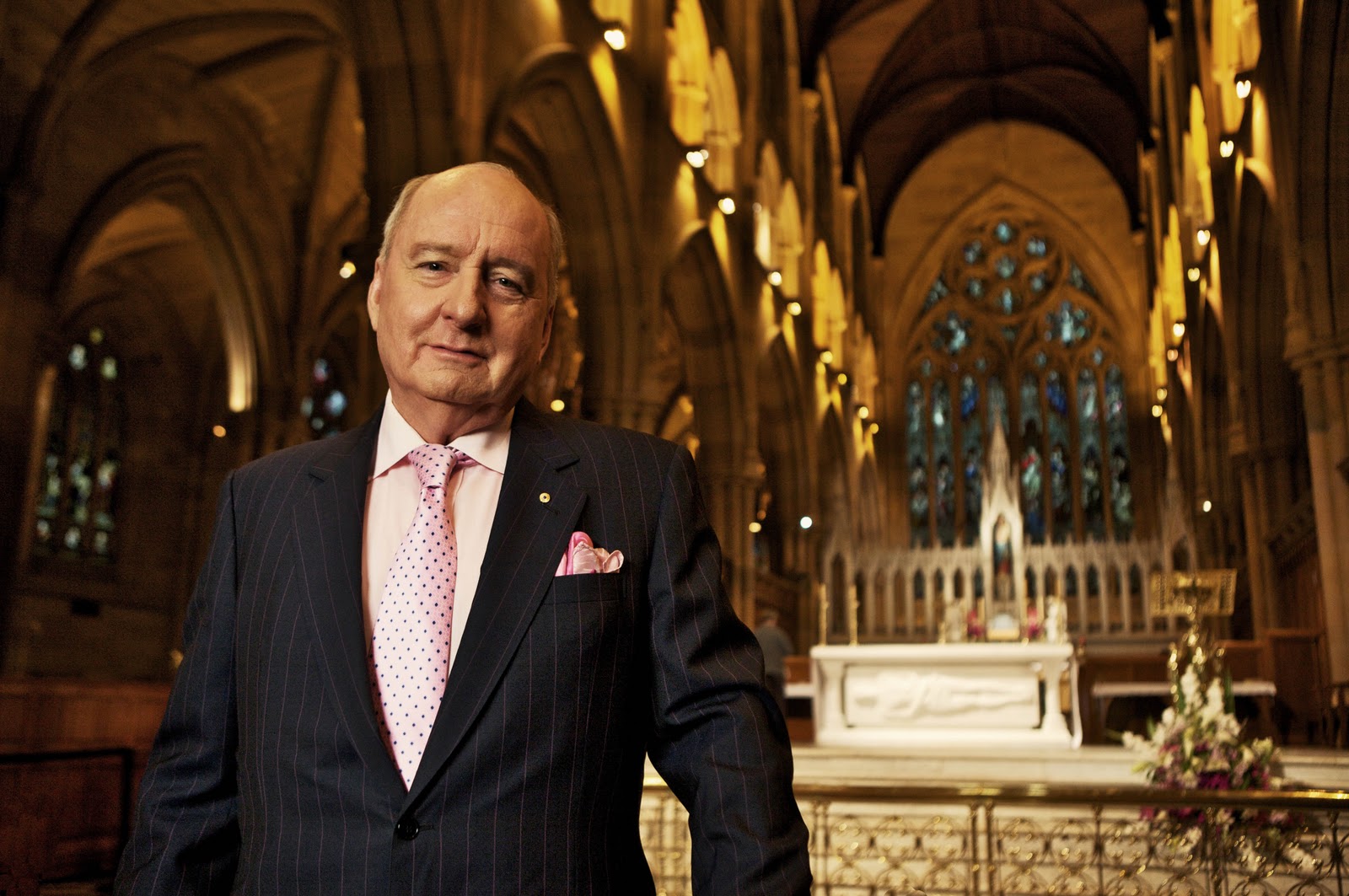 Well, society gave us a chance to play nice, and look at us go – we’re destroying the joint.

Alan Jones, that penetrating arbiter of our nations flaccid morality, has said it, and thus it is so.

Jones was discussing a major foreign investment with the unenlightened bastion of protectionism known as Barnaby Joyce, and offered Joyce a bit of a laugh to brighten their mood after a Very Serious Discussion about empowering xenophobia and opposing free trade. You see, Julia Gillard (alleged Prime Minister of Australia, known heathen, obvious child-hater, and probable lesbian) has announced funding to support the political, economic, and social empowerment of women in the Pacific region.

There are many grounds on which one could object to this policy. The effects of foreign aid on a local economy, perhaps, or the unintended consequences of affirmative action.

Jones, however, thought this money could be better spent buying Cubbie station, aka land that a “Chinese consortium” is purchasing – probably to build nukes or enslave us all or something – and he had this to say:

“She [Gillard] said, ‘We know that societies only reach their full potential if women are politically participating’.

Yep. Women are destroying the joint. Women participating in politics just screws things up. Why should we foist this problem upon our neighbours? Evidently they’ve got a good system if women need foreign support to make (inevitably bad) decisions in their own country – and how can women be good leaders if they can’t do it without foreign aid?

The sisterhood threatens us all. Melbourne and Sydney are total war zones. Are we not morally obliged to help the rest of the Pacific Region avoid our own mistakes?

In the immortal words of Spottswoode from Team America, ‘Jesus tittyfucking Christ’.

Now, Alan Jones is a dick.

I know it, you know it, and he probably knows it too. The man makes his living by saying outrageous things and pissing people off. He is a paid troll.

To our young, university-molded minds he is the fully erect Penis of Misdirecting Directionless Frustration, who (think those among us who have no respect for the intelligence of the general public) ejaculates his syrupy mixture of hatred and hyperbole onto the consenting faces of those waiting for someone to blame for their lack of satisfaction.

This time it was women with power.

As much as we might like to dismiss this arrogant sexism as Old White Man syndrome, or because he is shock jock, we must remember that this guy is, a) the problem, b) the symptom, and c) not the only one who thinks like this.

When Rudd was ousted from the Prime Ministership, the chain emails I received were funny – an Ikea ad, ‘Hey Kevin, we’ve got a cabinet that won’t let you down’. When Julia ascended, it got personal – something about a fake new KFC meal featuring two breasts, two big thighs, and a red box.

Recently, lobbyist Graeme Morris called Leigh Sales a cow for the offense of being a journalist and asking probing questions of Tony Abbott.

Everyone loathes Gina Rinehart because she doesn’t seem to understand people who are not millionaires, but half of the rage thrown at her resorts to cheap shots at her non-supermodel appearance.

The Anglican Church is in the process of changing wedding vows to ask the bride, “will you honour and submit to him, as the church submits to Christ?”. The Archbishop of Sydney has defended this by decrying egalitarianism.

To global news now, and just over a week earlier Rep. Todd Akin, of Missouri, who is currently standing for the Senate, said of pregnancies resulting from rape, “If it’s a legitimate rape, the female body has ways to try to shut that whole thing down.”. Yeah. He’s on the House Committee on Science, Space and Technology.

These prominent examples go to the way women are still seen as women first and people second, and are judged negatively as a whole.

Jane Caro (communications consultant, freelance writer, author, mum, and The Hilarious Blonde Chick on the Gruen programs) has, over the course of her career, come up against this sentiment.

“A woman in charge is still seen as unnatural, frightening and almost against nature. Any mistake on the part of a female leader – whether in business, politics or anywhere else – is still seen as proof that women as a group are not up to it”.

“That’s one way you know you are dealing with a prejudice, when one member of the group represents all members – Asians can’t drive, women aren’t funny, blacks are dangerous.”

Moreover, it identifies the way women are routinely dismissed in decision-making – your role is to be pretty and compliant, and if you deviate, you deserve a truckload of (hopefully non-physical) abuse.

So don’t you dare bring it up. ‘Oh, lighten up. It’s not serious’, they’ll tell you if you object – to the big stuff, or the little, everyday stuff. ‘They’re just words. Don’t get so emotional about it. It’s just a joke’.

It is a joke that in Australia, over a century on from becoming one of the very first nations to allow women to vote, some loudmouths hold and broadcast the view that women cannot be trusted with decisions, because ovaries.

It is a joke that when women have and express legitimate emotions they are still written off as being overly sensitive (because emotions are irrational and men are rational/unemotional so rational is good and your feelings are absurd). At least it’s not codified into a mental or physical disorder anymore.

But when we hear every fucking day about Juliar and Gina Is Fat Hurr Durr and then some state in the US is making it more and more traumatic to choose an abortion, and Saudi Arabia is solving the “women want to work” problem by building a female-only city, and the way rape is a tool of control in war just as is at home, it can fatigue you, and beat you down (into your rightfully submissive place).

Not this time – this time women in the Almighty Twitterverse: Where The Conversation Begins have banded together to empower ourselves and disempower sexist bullshit.

All you’ve gotta do – sometimes all you can do – is laugh at this shit.

“Instead of going on the defensive ( we’re not destroying the joint and here’s the reasons why) which immediately puts women in the one down position (again) having to justify their right to lead, it puts us in the one up position, poking fun at the ridiculous nature of the intrinsic assumptions behind the insult.”

“Suddenly it is the insulter who needs to explain and justify, not the insulted. And they’re the ones who look silly and the butt of the joke.”

Jane Caro is credited with the first tweet in the vein of #destroyingthejoint, but as she points out, “Jill Tomlinson deserves much of the credit for attaching the hashtag and others like Jenna Price and Yvette Vignando really helped it along”.

A Facebook page and clothing/accessory line popped up. Articles and responses have been zooming around the web, on every platform. “It’s strength, in fact, is that it became a spontaneous collaboration”.

When it comes to humour, spontaneity and collaboration is often what it takes.

You can take that cognitive dissonance – the reality of women as second class and the logic of all humans as holding equal value – and smoosh it into something funny that makes you smile instead of sighing with frustration at not being able to do a whole lot as an individual.

“By turning the insult into a joke we say to Jones & his ilk ‘you have no power over us’ and that’s why it infuriates them so much.”

In all the time I’ve spent reading about, learning about, and observing gender in society (this includes the internets) I have rarely felt the way I did watching my twitter feed explode with women and men sharing their tales of how they were destroying the joint. I felt empowered.

Normally I wind up feeling angry or weepy and I’ll go smoke a cigarette til I feel better or explode in a ball of feelpinions. This article is a pretty good example of the latter (ooh, meta), so I have some learnin’ to do – but not as much as Jones, Morris, Pickering, et al.

In naming names I must be clear that this is not about men as a whole.

Most men are awesome and kind and (hopefully) pretty embarrassed for the dudes who say this shit.

I want all people to be considered as individuals, who are judged on their thoughts, words, and actions.

This is about people who make sexist comments and do sexist things, and in so doing, normalize them. This is about sexism, which is neither implicitly or exclusively male. Men are sexists, women are sexists. Pretty much everyone is, in a patriarchal culture.

Fuck it. Sexism neither original nor clever, but if the rest of us are, we can shut it up for good. It will never go away unless we call it out when we see it, and (even better) laugh at it.