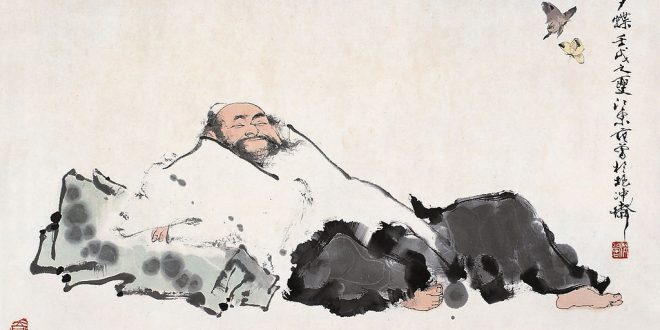 The Carving of an Ox: A Retelling

I first came across The Carving of an Ox during one of my Chinese literature classes in high school. It was a selected passage from Zhuang Zi (莊子), which is a collection of stories and anecdotes that centre around core ideas of Daoist philosophy.

This story introduced me to one of the major concepts in Daoist philosophy, which can be summed up in a simple Chinese phrase, ‘Wu Wei’ (無爲), the closest English equivalent would be ‘effortless action’. It is about following the laws of nature, working with and not against the current.

We begin with Chief Ding as he readies to carve an ox for Lord Wen Hui.

His hands come into contact with the tissue, then his shoulders, his feet.

The whirring of the knife matches the rhythm of bones and flesh coming apart, not unlike the grace of music, it follows the harmonies of the Dance of the Mulberry Woods, aligning with the laws of the Blended Notes.

‘Ah. Marvellous!’ King Hui of Wei exclaims. ‘How ever did you acquire skill as such?’

Chief Ding lowers his blade and replies: ‘This humble servant delights in the ways of Dao, and Dao, my lord, is beyond any skills. When I first started carving oxen, I could only see the ox as a whole. Three years hence, it is no longer only the whole ox that I sees. Nowadays, I am guided by heart and spirit rather than his vision; where my limbs hesitate and halt, my mind carries on. He is guided by the laws of nature when he slips his blade into the large crevices between tissue and bone, guiding it towards the gaps between the joints, abiding by its original patterns as he cuts. Never have I forced my way through the tight knots of flesh, so why would he ever find any trouble with larger bones? An exceptional cook trades his knives every year, for they slice at the meat; an average cook trades his knives every month, for they hack at the bones. The knife I hold in my hand has endured nineteen years; a thousand oxen it has butchered, yet it remains as sharp as a blade newly whetted.

There are gaps between the tendons and joints. The blade’s width is insignificant when slipping through these gaps, it is thin enough to have the complete luxury to turn and manoeuvre in between. Which is why my blade remains as such state even after nineteen years. Despite that, whenever I encounter places of blockage, he is especially cautious, his gaze focused, motions slow, actions small. The body of the ox will then come apart entirely, like mud when placed on hard ground. He then stands there, looks around him, satisfied, and only then will he put away his blade.’

‘Astounding. I hear your words and I realise the way of life,’ The King Hui of Wei says.

The main idea that I took away from this story is ‘acceptance’: acceptance of different people, of limits, of myself and the world around us. At times, this story pops into my head when I stop myself before rushing headfirst into any given situation. Too often, we go into things with muddled thoughts and unresolved emotions. We hack our way through our issues with impressive vigour, yet, by the time we get to the other side, we’re scarred, drained and at the worst of times, not any better off than when we started.

There are so many problems that revolve in our lives, and quite frankly, they make me dazed and confused when I think about them sometimes. If we don’t stop for a second and slow down, it’s just too easy to walk ourselves into situations half-blind; if we’re half-blind, we’re not helping ourselves, and certainly not the people around us.

‘Dao’, which is ‘the way’, urges us to work with the patterns in our lives. The bumps, cracks, and the many mountains and valleys. We’re better off  and accepting and navigating the terrain as it is.

Share
Previous How Did An Alleged Sexual Predator Get Appointed to the High Court?
Next Bigger Democracy is Better – The Case for Kids