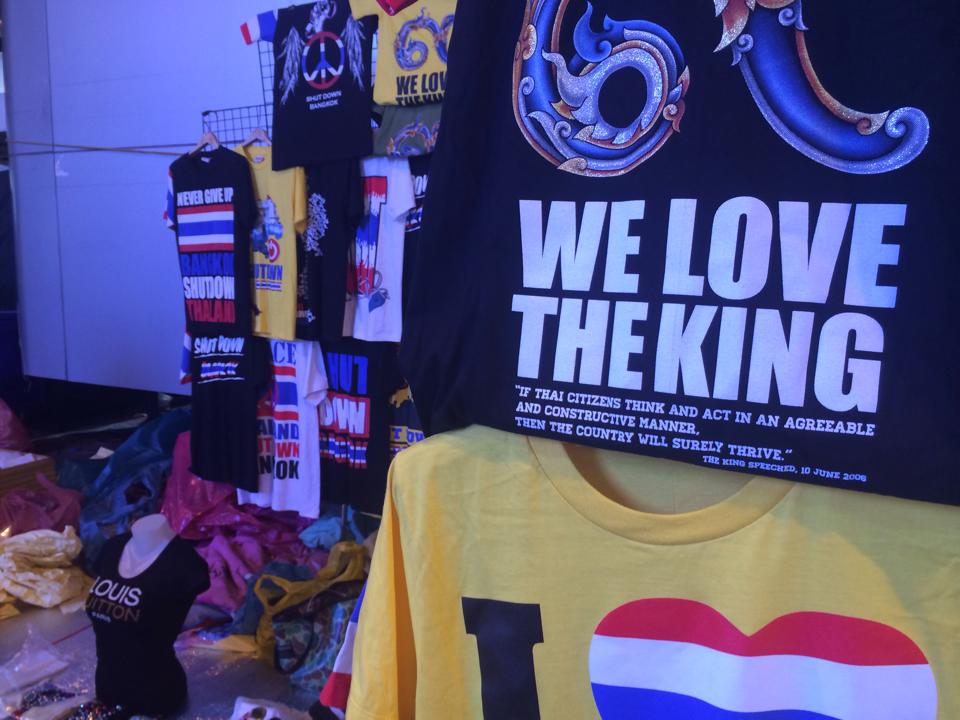 Thailand torn: A country at war with an unseen enemy Red and Yellow collide like some disastrous ketchup-and-mustard calamity – Will Bangkok be the pyre that sets alight corrupt politicians, protesting vigilantes or democracy itself?

An elderly rural worker is stooped in a troubled sleep, rocking softly to the motions of the crowded Skytrain zooming around Bangkok. Clad in protest paraphernalia, her wrinkled tan skin is irritated by the oversized blue, red and white straw hat slowly covering her eyes – her bright yellow shirt is ill-fitting, contrasting to the pristine city-folks tailored wears.

A comical image to some, but a telling and almost perfect representation of the conflict erupting in Bangkok’s streets. Like the elderly train-farer, the exterior exhibition of protest is loud and violently supportive but, at the core, is a sleeping confusion and discomfort.

It is approaching the fourth month of protests in Thailand’s capital where the People’s Democratic Reform Committee (PDRC) is calling for a resignation of the current Pheu-Thai (For Thai) Prime Minister, Yingluck Shinawatra.

The protests have claimed 10 lives and left 600 injured, reports the Bangkok Post.

Yingluck is the sister of former PM Thaksin Shinawatra, ousted in 2006 via military coup for allegations of corruption, authoritarianism, treason, conflicts of interest and muzzling the press.

She campaigned in 2011 under the banner, “Thaksin thinks and the party does”, and won the election by a landslide victory.

Thailand is ranked twelfth worldwide for having the largest percentage of income inequality, 88 per cent of the population being rural poor.

The Shinawatra political victories have been pinned on their strong rural welfare campaigns – mere propaganda in the opinion of the PDRC.

PDRC supporter Taam Yingcharoen, 17, agrees that the Pheu-Thai government has given more focus to the lower class, but it is only an exercise in promulgating false hopes. “It’s very normal when you have a government supporting only the lower class, they’re bound to win the election,”Taam said. “The rice subsidy is a great example of the false hopes that the government are giving to the poor. Four farmers in the past month have already killed themselves because they can’t feed themselves.”

The 2011 rice subsidy scheme was an attempt to boost the primary industry by the government buying rice stocks at 50 per cent higher prices than the global market value.

In a duel attempt to also raise revenue through constricting supply to the international market, the scheme did not anticipate the flooding of rice from India and Vietnam leading to a supply glut.

The result from the scheme is that farmers have not been paid for their wares in eight months, rice stocks are rotting in their holdings and it has left a gaping hole in the government’s budget, rounding to about eight per cent.

Additional rallying points for the protesters include recent changes in the constitutional law, which disallow public scrutiny for any passed bill and dilutes the powers of the King in the law-making process.

The catalyst for the December protests was primarily the attempt to pass the “Amnesty Bill”, which would effectively give a pardon to any political crimes committed after 2004. This conveniently primed Ex-PM Thaksin Shinawatra for his return to politics.

Former PM Abhisit Vejjajiva has said that the government has been acting in contempt of the law.

“A government that doesn’t support the constituents that have not supported their election campaign don’t deserve our support in policies,” he told the BBC.

Valiant though the PDRC’s attempts seem, their methods in obtaining power are mired with contradictions.

PDRC protests have disrupted the civil peace by creating blockades at Bangkok’s main squares and crossings. In addition, their refusal to participate in an official election and their bid to supersede the current government with an unelected people’s council wholeheartedly subverts the meaning of a liberal democracy.

“Democracy has gaping holes,” Taam said. “Communism is perceived as something inherently evil – but there are perks to it that make it credible. That’s why people accept it. When we are using undemocratic acts as a weapon, sometimes it’s the only way to attack undemocratic actions.”

Criticism from the Western media has labeled the PDRC movement as an attempt by the Bangkok elite to stop money moving out from the city’s capital.

“If you’ve been to the protests, you would see that it is filled with every social class – lower class, middle class people and even people are rolling in with Lamborghinis – I’ve seen it myself,” Taam said.

Unconfirmed reports have been circulating that the PDRC have paid a number of rural poor to sit in at protests to boost numbers and increase socio-economic diversity amongst participants.

Certainly, a view of Sala Daeng can confirm a number of people have used the protest space as a camping ground and, additionally, a market space for protest merchandise.

One among the alleged mercenaries is Sombat, a homeless Thai national who has made the Sala Daeng pavement his home for the past two months. “I’m not sure what needs to be done, but I’m just here because the government is corrupt,” he said. He is one of many, sitting passively as Thai flags are waved manically and Thai nationalist songs are blared from the speakers.

Statistics from the World Bank indicate that while the government’s fiscal attempts at improving income inequality have been moderately unsuccessful, the gap has begun to close under the two Shinawatra leaderships.

Retired Canadian couple, Wayne and June Farina, have been part of the protests since its inception in early December 2013. They suggest that the statistics aren’t the full story.

“There…[are] a lot of things that run under the surface here in Thailand that unless you live here for a long time you won’t ever see or know about. The whole place is run by just a couple of families,” Wayne said.

Sitting in the heart of the Sala Daeng protests, the Farinas spoke of the intricacies of corrupt business deals.

“The government draws up a contract for $200,000 million Baht and they only have one bidder – they don’t have two or three bidders because it’s not public information. What happens to that money is – politicians pocket half of it and half of it goes to the company that has to do their job,” Wayne said. “There is no transparency here.”

June has hosted several meetings publishing the breakdown of the Thai budgetary allocation (which is not normally public information), saying that the funds allotted to education are shamefully low.

“Education is the key to ensure the new generation is protected from corruption. When one side has all the money and the other side has only ignorance, it’s the perfect environment for corruption to fester,” June said.

Student activist Taam agrees, conceding that education is better than an undemocratic revolution, but sees no end to the cycle of corruption.

“Corruption is a huge problem – it’s a crime that every government commits. I don’t think it will ever end. We just have to keep fighting for our rights – fighting against the grain is just part of the cycle,” he said.

Previous A Farewell to Welfare?
Next Shortlist #1