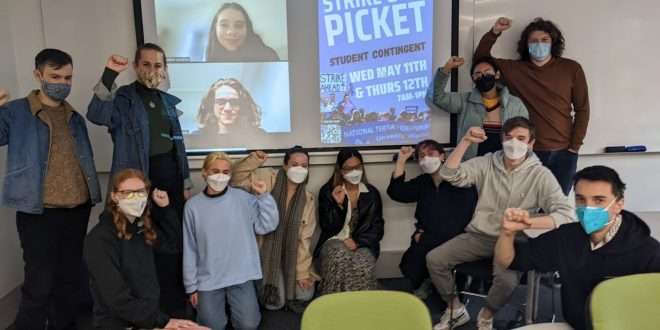 A heated discussion between the two parties about recent course cuts and the faculty’s motivations behind the degree merger ensued, resulting in Ed Collective kicking the executives out of the meeting.

When pressed about cutting courses, the ADA Deputy Dean said:

“There are no cuts planned. We are looking at bringing educational experiences up to speed with what students need when they graduate”. *

Ed Collective responded by referring to course cuts that occurred in 2021 in regional electives and languages, resulting in several International Studies students having to seek off-campus tuition to pursue areas of study they are interested in.

When asked about the possibility of staff cuts, Ms. Perkins said:

“This is not about staff cuts. There are no proposals, there’s none of that being looked at, as far as cutting any staff”.

Ms. Perkins went on to say, “The intention is not to any way cut courses but looking at how can we reshape courses”.

However, when pressed to guarantee that no current courses would be cut, both executive staff members did not provide an answer.

In response to their comments, Shovan Bhattarai, a member of Ed Collective, said:

“We are committed to fighting these attacks on our education, we actually think that if we mobilise students in an oppositional campaign, we have a shot at defending our education”.

“We believe that the proposed ADA changes stand to limit student’s learning and can be construed as a justification for staff cuts and as such, we oppose these changes”.

After the executives were asked to leave, Ed Collective devised a campaign plan to protest against course cuts and the degree mergers, hoping to initiate widespread momentum among students.

Disclaimer: *Upon request for further clarification of his comment, the ADA Deputy Dean added “Our goal is to offer our students an enhanced educational experience through programs that are in demand, that have a high potential for growth and that prepare our graduates for success at all stages of their career. The proposed degrees have been robustly considered through a consultative process involving myriad stakeholders including students, faculty and external partners“.

Previous Meta for Dummies: Everything you need to know to impress your tech friends
Next University of Sydney staff go on strike