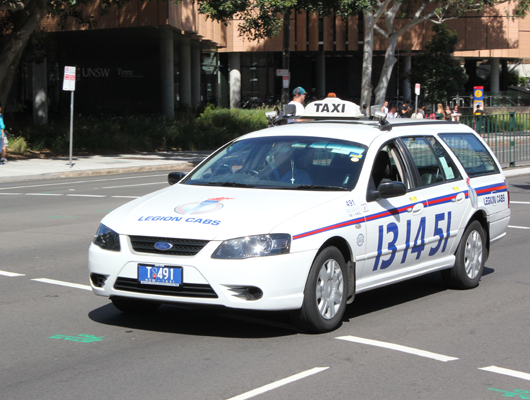 The national website for one of Australia’s most in-demand service industries reads: “Workers can predict that they will be assaulted at least once every three years … it is comforting that there is only one murder a year.” A man who has worked in the industry for the last six years describes it as “a very corrupt industry where the actual worker is the least of anyone’s concern!”

According to the bureau of statistics, the average working week for the majority of taxi drivers is over 50 hours and, according to the National Taxi Association website, the average income is as little as $13 per hour, with no annual paid holiday or sick leave.

The majority of Australians have an average workweek of somewhere between 35 and 40 hours. The average Australian is also entitled to a minimum wage, annual paid holiday and sick leave.

Michael Jools, President of the Australian Taxi-drivers Association, has been driving cabs for over 25 years. He acts on behalf of cab drivers, sending recommendations to the government and regulatory bodies to change taxi laws to make it safer and fairer for the drivers.

The slogan for his organisation is “a fair share of a fair fare in a safe driving workplace”.

When asked whether he thought conditions were improving for taxi drivers over the years, he said “it’s getting worse.

“The average level of violence is getting higher, people are more aggressive. It’s harder to drive taxis. The demographic of taxi drivers is also changing, there are a lot more drivers where English is their second language. Most of the problems start with a breakdown in communication,” said Mr Jools.

One assault that received both media attention and public support of the driver’s recovery was the vicious attack on Peter “Blackie” Blackman, lead guitarist of punk rock band, The Hard Ons.

Blackie said that he has experienced many unprovoked attacks during his work driving cabs over the past six years.

“I was also involved in an assault which left me with serious head injuries and put me out of work for six months,” he said.

In May last year, Blackie was hospitalised after being assaulted with a skateboard by two teenagers whilst driving his taxi. A Facebook update posted by his bandmates stated that Blackie’s injuries included “a skull fracture, swelling on the brain and 16 stiches”.

“Robberies and assault stories are too common. Taxi drivers can be seen as easy targets,” said Blackie.

Mr Rod Frail, spokesperson for the NSW Taxi Council, acknowledges that taxi driving has its risks.

“Driving a taxi can be a challenging job. Drivers have to deal with congestion and other factors that require a range of safety measures to be in place,” says Mr Frail.

Mr Jools believes that the industry needs to change and that the current working conditions are not up to the standards most Australian workers would expect. He says that, whilst government bodies and unions, such as the NSW Taxi Council, are aware of the challenges the industry faces, there is still a long way to go.

“We want change. We don’t want things to go on as they are because, as they are, they are bad. There needs to be improvement in security and wages. It’s really necessary.”

Mr Frail stated that the NSW Taxi Council is working closely with the police and government to encourage increased safety in the industry.

“In NSW, we introduced driver training to de-escalate difficult situations, GPS tracking systems, back to base alarms, and other technology-based security measures in taxis, electronic payments to reduce the amount of cash in vehicles … The NSW taxi industry works closely with the NSW Police to assist with crimes against drivers,” said Mr Frail.

Mr Jools dismisses these measures saying that the “bare minimum” is all that is required and if the conditions for workers are going to change, then that isn’t good enough. He explained that new laws requiring cabbies to wear seatbelts were an example of the government not understanding the industry.

“[When seatbelts were first introduced] they didn’t lock, so people could grab the seatbelt and strangle you from behind. The memory of that happening is still there,” said Mr Jools.

He explained the anxiety and fear of wearing a seatbelt and not being able to stop the car and run away quickly. When asked if he had experienced the need to flee his cab, he said,        “Oh absolutely, many times.”

“The safety of a driver in a vehicle is paramount, and evidence from the NSW Government Centre for Road Safety shows that this can be best achieved through the driver wearing a seatbelt,” said Mr Frail.

Mr Jools says that if the government were interested in improving driver safety they would be accelerating the process of installing in-car cameras and safety systems.

Mr Jools described being a taxi driver as “the perfect entry or exit job”, but also made it clear that it is a career which most take up as a last resort.

“We do it because we haven’t got any other options. It’s the ideal occupation for a young person trying to make a start when they haven’t got any English skills and it’s perfect for a 65-year-old person who couldn’t get another job.”

Mr Jools said that, due to the long hours, below average pay and high risk of violence, taxi-driving is a not a career many enjoy, illustrating his point by saying,

“The government couldn’t put buses on the road if they were only paying the drivers ten dollars an hour and expecting them to drive an average of twelve hours a shift. Nobody would do it.”