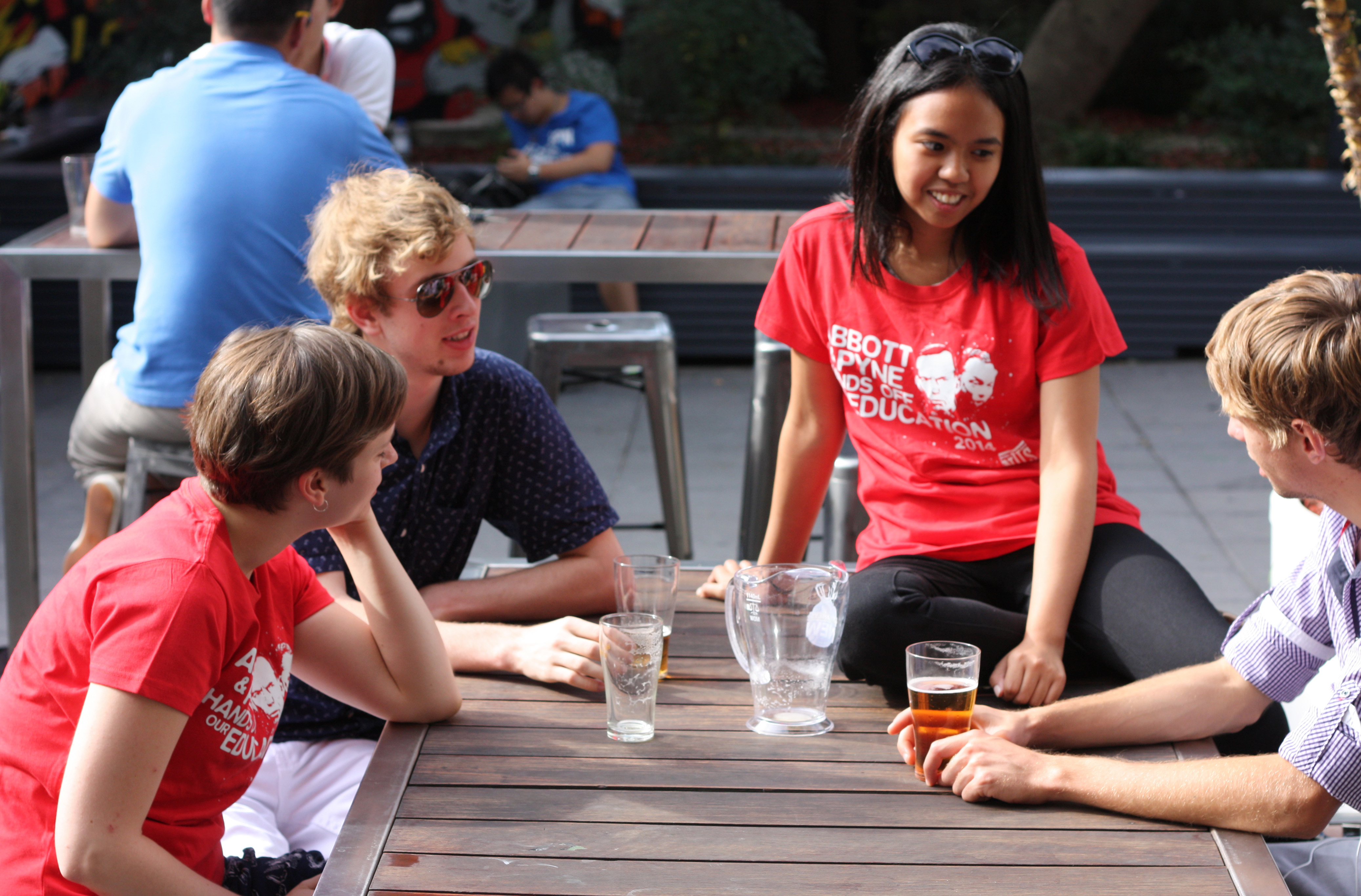 Nisa Vinandar enjoying the company of friends at the Roundhouse

Students to rally against looming cuts

“Abbott & Pyne, hands off our education!” is the rallying cry to be heard around the nation this coming Wednesday, the 26th of March, as students and university staff come together to protest the Federal government’s proposed cuts of an estimated $2.3 billion to the tertiary sector. UNSW students will also be making their presence known, with a pre-protest party being held on campus at the Village Green at 11am that morning before heading to join the peers at the rally.

As many would have noticed on the chalk-riddled walkways and the numerous flyers adorning the walls of campus, the National Union of Students (NUS) has organised a National Day of Action (NDA) with the intent of showing the Federal government the dissatisfaction within universities across Australia over the legislation introduced by Education Minister Christopher Pyne last November.

In what Sarah Garnham, National Education Officer of the NUS, calls cuts that will ‘put whole courses under threat’, the legislation proposes abolishing the HECS-HELP up-front payment discount of 10% as well as the application of an efficiency dividend to the sector of two per cent in 2014 and 1.25 per cent in 2015. The dividend has been highlighted as a key concern amongst many; Universities Australia estimates it will result in $1 billion being lost within in the sector per annum by 2017.

The cuts, proposed whilst Labor was in government and introduced into Parliament by the recently elected Coalition government, have been criticised by Universities Australia, the National Tertiary Education Union and numerous stakeholders in the sector as detrimental to the ability for lower socio-economic status student’s access to university education as well as stating concerns that courses could be cut and class sizes enlarged.

Tharunka spoke to Nisa Vinandar, a second year Media/Law student and councillor on the UNSW Student Representative Council (SRC), about why she feels it is important that students let the government know how they feel about the recent actions of the Federal government at the upcoming NDA.

When asked about why these cuts matter to her, Vinandar responded that “For me it’s the fact that it’s going to affect how everyone’s education is – there are a lot of people who wouldn’t have the opportunity to study (at university).” On reduced class sizes she added, “I learn more in a small classroom rather than in a lecture room with 300 people and I think that’s what a lot of students feel as well.”

Vinandar highlights that with her mother being a university lecturer she understands that “students learn more from lectures that inspire – all the funding cuts will lead to staff layoffs which will lead to a lot of really good, inspirational lecturers being cut off as well.”

Student life outside the classroom is also under threat, as Vinandar pointed out that the “funding cuts are going to affect the SSAF. Personally I develop a lot out of the classroom, so the cuts will affect clubs and societies.” Education Minister Christopher Pyne’s discontent with the Student Services Amenities Fee (SSAF) has been noted as recently as last September when he proposed abolishing it.

Vinandar also commented on the perception of the SRC by the student body, commenting that while some may be sceptical of the Councils ability to affect change she’s sees it as “if someone doesn’t take the initiative to start something and get involved in something then nothing’s going to happen… Maybe our impact won’t be great but at least we’re doing something and trying to make an impact.”

The education collective and the UNSW SRC have organised a pre-protest party at 11am on the morning of the NDA on the Village Green which will be a springboard to the rally to be held at the University of Technology’s Broadway campus. When asked about the days planned events, Vinandar said “I’m really excited about it because not only will you be doing something for a positive cause, you’re also going to meet a lot of people and there’s going to be DJs and face painting and ice cream. Who could say no to that?”