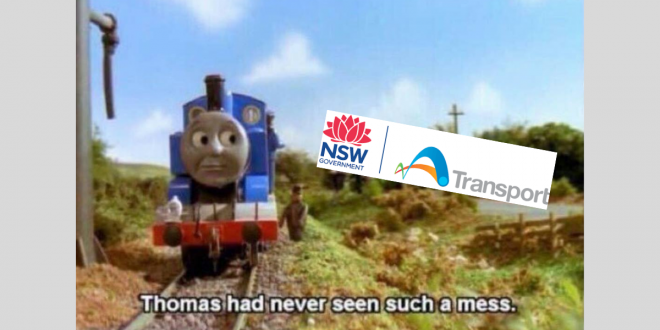 Sydney-based trains were spectacularly left in the rail yards on Monday morning as tensions between NSW Transport and the Rail, Tram and Bus Union (RTBU) steamed off a cliff.

A tweet in the early hours of Monday morning by the T1 Train Line account caught students of Sydney and the regions of Newcastle, Blue Mountains and the South Coast off-guard.

A lengthy weekend dispute between Transport for NSW and the Rail, Tram and Bus Union (RTBU) over planned industrial action caused the cancellation.

Both Transport NSW and the RTBU have condemned each other’s actions, blaming each other for the commuter chaos on Monday morning.

So, what actually went down?

The planned industrial action resulted from a breakdown in communication during a Sunday mediation session between NSW Transport and the RBTU.

NSW Transport filed a complaint to the Fair Work Commission prior to Sunday that sought to prevent the industrial action which, they argued, would apparently have “[inconvenienced] hundreds of thousands of commuters” and cost “millions of dollars.”

Australian Prime Minister Scott Morrison commented on the strike, stating that unions had “shut down the city with a massive big strike,” and going on to say that “the union movement has decided to [welcome international tourists] by shutting down the trains and causing gridlock.”

The union acted because it harbours concern for workers’ welfare, due to ‘flexible’ and unstable rostering conditions and issues regarding worker pay. They have called for a commitment from NSW Transport that no train services or lines will be lost if privatisation occurs.

However, many UNSW students were left in the lurch by the dispute. Posting on UNSW Discussion Group, Alexandra alerted students to the closure of services at 7:09am.

The post attracted 335 reactions and 55 comments, with students commenting that they may lose work hours, among criticism of NSW Transport and a meme about being stranded.

Speaking to Tharunka, Alexandra expressed her disappointment at the situation.

“I think NSW Transport made a really dumb move that appears to have been made with the intent of blaming the commuter chaos on the [RTBU].”

Another UNSW student, Alex, observed the impact of the closure on fellow students.

“There were definitely students in my course that were unable to get to campus in time for their tutorial, as they joined my later online tutorial.”

Speaking at the SRC Meeting, SRC President Nayonika Bhattacharya, said SRC was advocating to UNSW on behalf of students affected by the rail closure and intends to ensure that make up classes are available, and no student is penalised for being unable to attend class.

Some rail services resumed to a reduced timetable on Tuesday.

However, students still struggled to get to their classes due to the potential knock-on effect that train delays had on car traffic. UNSW student Simran Borges said:

“My class started at 9am, and I left my house at 7am. Normally it would take me around an hour [but] because of traffic, I was stuck on Parramatta road for two hours.”

Previous Arc Board nominations open from 28th February
Next Queer rom-com turned musical podcast? ‘Twinemies’ is a sensation for the ears