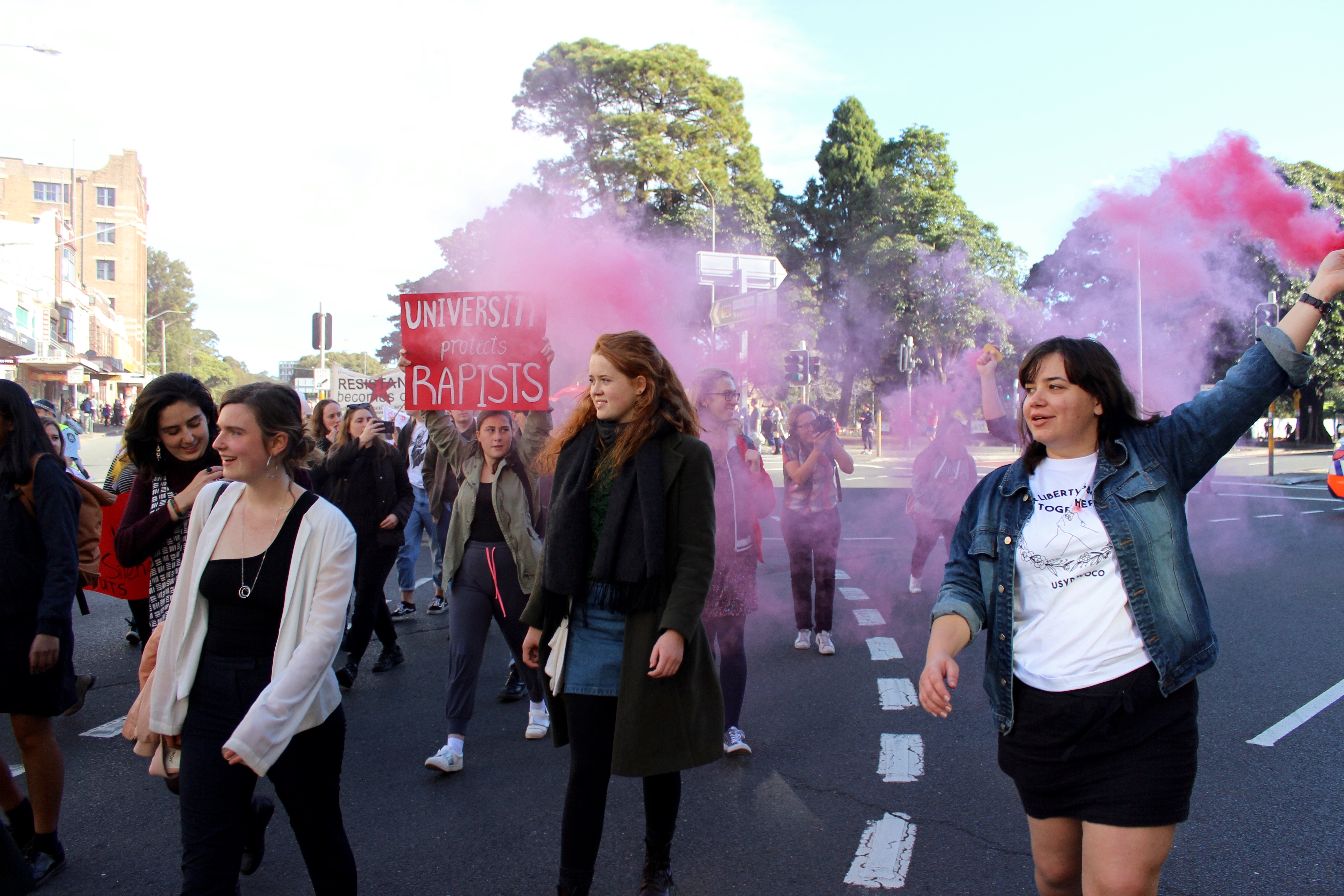 Students Fight Back Against Campus Sexual Assault and Harassment

Students Fight Back Against Campus Sexual Assault and Harassment

Words and photographs by Grace Miner

We will no longer be ignored.

This was one of the main messages at yesterday’s protest against rape on campus. The day after The Australian Human Rights Commission released its report on sexual assault and harassment at Australian universities, hundreds of students from multiple universities gathered at the University of Sydney’s Camperdown campus to protest against universities’ inaction and the systemic silencing of victims.

“You are not fulfilling your responsibility if you have services that no one can access,” she said.

“We need to ensure that as awareness of sexual assault in universities increases, it is student needs that are taken most seriously and not managements’.”

Abby Stapleton, Women’s Officer for the National Union of Students, mirrored this sentiment.

“We underreport because we know we will be forced into a room to kiss and make up – an actual policy at some universities,” she said.

“The university does not support us on any level.”

But even when reports are made to university services, students are not always listened to. Catherine, a former student at UTS, described her university’s inaction when she reported incidences of assault.

“I was forced to stop studying my masters because my perpetrator was still a staff member here. Even with witnesses, they protected him and their reputation over me.”

Without adequate support, many victims are forced between choosing to stop studying or otherwise face their perpetrator every day. Scarlett spoke about how her assault in school affected her academic career.

“I went from getting a 96.5 ATAR to being expelled from uni for academic suckiness. I’ve tried to go back twice and this is my first week now at USyd.”

The AHRC report is the result of the tireless efforts of students, women’s officers and student associations over many years. Imogen Grant, USyd Co-Women’s Officer explained what this fight means.

“For too long we have been told to shut up and get on with it,” she said.

“Everyone has the right to an education free from fear of violence. When we see people locked out of education this contributes to the pay gap, and to gender inequality.”

Universities have claimed again and again that they cannot act on sexual assault claims until they receive hard facts. Now the facts are here, students expect action.

“They wouldn’t believe survivors, they wouldn’t listen to our student representatives but they said they would with that data,” said Katie Thorburn, Co-Women’s Officer at USyd.

“It is really important that now we’ve reached this apex in the campaign that we’re able to ensure that what the university does now is not just window-dressing or words but concrete actions that will ensure assaults are prevented in the future.”

According to Lizzie Butterworth, UNSW is on the right track towards implementing key infrastructure.

“UNSW has taken some important first steps towards supporting survivors of sexual harassment and assault,” she said.

“We need to ensure that the university follows through with promises and continue[s] to make vital institutional changes long after media attention dies down.

“The Australian Human Rights Centre releases their good practice recommendations on August 3rd and we hope that the university uses these, along with continuous student consultation, to shape future policies.”

“We won’t let them get away with mitigating this issue,” said Abby Stapleton.

“We fought for this, not the universities. We don’t need change in a year or six months, we need change now.”

Share
Previous Alligators and Rolls Royces: Foundation Day Through the Decades
Next Paid DV Leave Back On Political Football Field