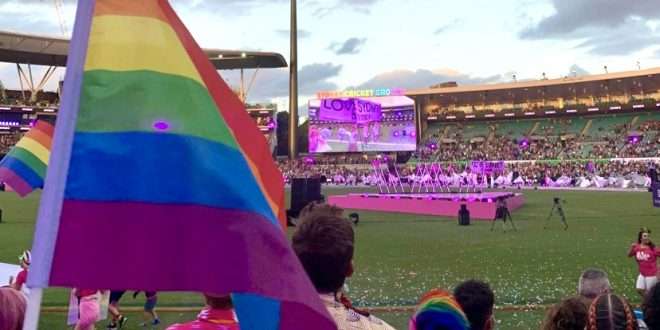 On the eve of Saturday’s parade, Queer Collective Officer Liora Hoenig (she/they) said big business sponsorship of the event was “taking away from the essence of… Mardi Gras”, which was borne out of the June, 1978 gay rights street protests that ended in violence and mass arrests.

“Hosting the Mardi Gras [Parade] on Oxford Street was a representation of how [it] started: a fight to be seen and exist in society… having it in a venue and so tied to corporations and companies take[s] that away,” Liora said.

They also claim that “there’s been significantly less attendance because it is a ticketed event,” adding that the move is “detracting from [its] authenticity – we need the Mardi Gras to be authentic.”

Liora’s comments support the concerns of activists like those from the Pride in Protest collective, who claim that the involvement of big business sponsors in the event – such as TikTok, Facebook’s Meta and Woolworths – is detracting from the grassroots interests of the LGBTQIA+ community.

“A Mardi Gras that isn’t for the people isn’t a Mardi Gras at all,” writes PiP member and Mardi Gras Board Director Wei Thai-Haynes, urging readers to support a vision of the event that is more than just a “corporate party”.

Doubling down on this point in a recent interview, she shared that PiP has a distinct understanding of how important the Parade is to what she terms “Mardi Gras Inc.”.

“They want it to be a company that runs an event, which takes corporate money, platforms the police, and then pink-washes corporates, NSW Police and the Liberal Party.”

Despite the controversy, many proud LGBTQIA+ members and their allies from UNSW will be among the 40,000 spectators and 5,800 marchers still expected to attend the 44th annual parade.

One of these attendees is Advanced Science student Katia Fenton (they/them), who will be riding on UNSW’s space-inspired float in their first ever Mardi Gras Parade, and said they’re excited to really absorb the “big atmosphere” of Pride celebrations.

“[I]t’s important for me and many others to just have a night to celebrate who we are, and have fun with it.

“Being a part of… Mardi Gras with UNSW shows our colourful history and [its] thriving Queer community.”

While Katia recognises that Mardi Gras needs funding to survive, they’re also concerned about its increasing ‘corporatisation’, and particularly dislike when corporations simply add rainbows to their logo for a few weeks without investing in the community year-round.

But for them and many other LGBTQIA+ folks, the event still overwhelming signifies freedom, inclusivity and pride.

“I was in the closet for so long, and this… is the first year I am out enough that I feel like I can go to Mardi, so I want to go all in, meet people and finally enjoy the fun of the queer community.”