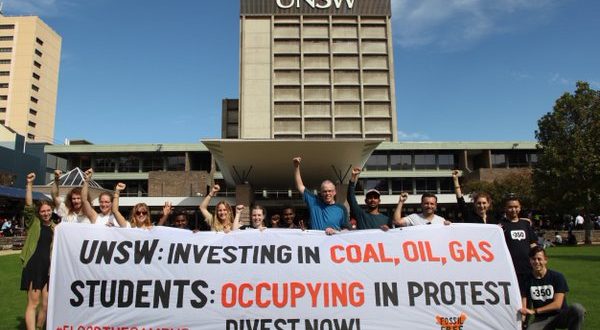 Staff, students and alumni have campaigned for the university to divest from fossil fuels for ethical reasons: If it’s wrong to wreck the climate, then it’s wrong to profit from doing so. Alarmingly, 2015 was the hottest year on record, while February this year was the hottest month according to NASA by a record-breaking margin. Vice-Chancellor Professor Ian Jacobs, however, seems content to continue down the path of his predecessors, handing millions to the companies most responsible for the problem. While the VC talks-up the university’s research in climate science and clean energy as if it’s some sort of consolation, I am instead reminded of those who proclaim peacekeeping efforts, but secretly profit from arms trafficking. His favourite catchphrase—that climate change is one of the “grand challenges of our time” – sounds a lot like spin, from a broken record.

Never mind the university’s painstakingly obvious position of self-interest on the issue. It receives significant funding from fossil fuel companies for its petroleum engineering school, and “it will be significant to lose it”, confirmed Neil Morris, Vice-President for Campus Life and Community Engagement. As if the world needs more petroleum engineers right now… Yet these people have somehow missed the writing on the wall (pro tip: google “United Nations Paris climate talks December 2015”).

Never mind that the university’s allegiance with the fossil fuel industry is financially stupid, with fossil fuel-related shares losing value and being outperformed by renewables over recent years. The Gates Foundation, as an example, is worse off by a whopping US $1.9 billion today than it would be if it had divested from fossil fuels three years ago.

Never mind those red flags, because the real clincher is this: UNSW is violating its own ethical investment policy, a document which states that “the University will not knowingly and directly invest in an organisation that operates at the expense of the environment, human rights… [or] public safety”. The science of climate change has long been established, and the adverse impacts of fossil fuels on the environment, health and safety are abundantly clear. Fossil fuels may have benefited human civilisation in the past, but there are cleaner and cheaper alternatives today. There is no legitimate reason for UNSW to continue investing in yesterday’s technology when it’s now causing us harm. Morris even confirmed last year that the breach of policy is “the single biggest issue that’s resonating with Ian [the VC]”. But what’s happened since then? Nothing.

The VC wants to be seen as taking an ethical stance on climate change, while continuing to hand millions to the big polluters. But he can’t have it both ways. You would think the man who calls climate change one of the “grand challenges of our time” would appreciate the fact that you can’t address a challenge as fundamental as this, without deviating from business-as-usual. Because what it boils down to is that business-as-usual is now its own form of climate denial. And UNSW, in making all the right sounds about climate change but violating its own investment policy to adhere to the status quo, is denial’s new face. Plenty of other organisations get it – Randwick City Council divested just last month—but not UNSW.

To send the message that denial is not okay, students with Fossil Free UNSW have joined forces with other universities in a nation-wide “Flood The Campus” campaign, which gives VCs until 15th April 2016 to act. After which, actions will likely be escalated. Civil disobedience has a long history throughout the world, bringing justice and progress to moral issues such as that of the Suffragettes, the Civil Rights movement, and Gandhi’s march for independence. If this is what’s necessary for UNSW to take leadership on climate, then students will do it peacefully and with the moral high ground, (check out ‘Edinburgh University student protest occupation May 2015). It has been done before, and it can be done again. So let’s stand up and work on this collectively.

Share
Previous The best environmentalists I know are the ones who have over 60,000 years of experience
Next How will the 2016 Federal Budget affect women?