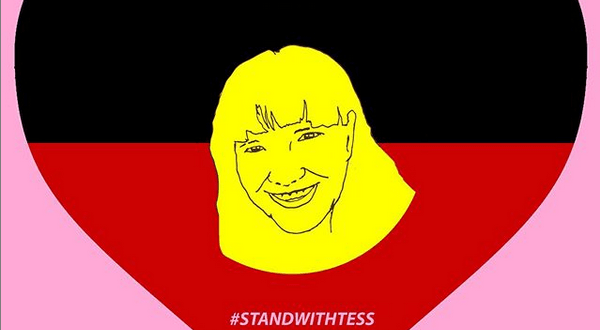 The logo of the Stand With Tess Collective.

#StandWithTess: The Fight for Campus ‘Aunty and Matriarch’, Tess Allas

On the 9th of June, the student body received an email titled, “UNSW stands against racism”. It stated, “We (UNSW) strive together to close the shameful economic, education, health and employment gaps between Indigenous and non-Indigenous Australians.” However, many students are left questioning if this was a performative action in support for the Black Lives Matter Movement, considering UNSW’s dismissal of Director of Indigenous Programs at UNSW Art and Design, Tess Allas, in 2019.

Tess is a Wiradjuri woman and a globally respected lecturer, curator, and writer in the field of Aboriginal Art. A notable project of hers is “Storylines” in which she researched, interviewed and wrote more than 500 biographies of Indigenous artists across Australia for their inclusion in the Dictionary of Australian Artists Online. She has also written essays and articles for the National Gallery of Australia, Museum of Contemporary Art Sydney and the Kluge-Ruhe Aboriginal Art Collection, and has curated exhibitions at Carriageworks, Wollongong Art Gallery, and Montreal First Nations Festival in Canada, to name a few. She began working at UNSW in mid 2006.

In her role as Director of Indigenous Programs, Tess wrote, convened, and taught the only Indigenous art courses offered at A&D, and beyond that, built a safe space for Indigenous students for personal and professional development as change makers in their fields. Tess was one of only two publicly First Nations identifying staff members on campus.

She has been described as ‘welcoming,’ ‘incredibly supportive’, ‘a powerhouse’, and ‘vital’ to the A&D and Indigenous communities.

Tess was informed her contract was not being renewed and the position was being terminated in September 2019, by Dean of A&D, Ross Harley, with no grounds given.

At first, #StandWithTess was, as described by the group, “fairly innocent”. They developed a petition and continued to inquire with management as to why Tess was dismissed,  but they were ignored or evaded.

Jack Poppert, A&D’s Student Council President, described Tess’s influence as, “in between this pastoral and academic care, coming together because of the expertise she had and the life that she lived. … At the early stage (of the Stand With Tess movement), it was a bunch of people (academics, students, alumni) who had been connected to Tess in these different ways.” And so, the #StandWithTess Collective began.

In person on the 8th of October 2019, the Dean told Tess and Vic Chapman, Elder in residence in one meeting, and contemporary artist Tony Albert and BFA Honours student Ruth Saveka in a separate meeting, Tess’s dismissal was “out of his hands” due to centralisation of the University and was the decision of the Pro-Vice Chancellor (Indigenous), Professor Megan Davis. Davis, in an email correspondence with Chapman days following, revealed it was solely the Dean’s department who dismissed Tess. On the 15th of October 2019, Harley reneged his initial claim in an email to Tess, saying that there was “misinformation circling” and that her dismissal was “a faculty decision” and not Professor Davis’s. Victor Chapman called Harley’s statement a “colonial trick” and “abhorrent” for its implicit accusation of lying against himself, Tess, Tony Albert, and Ruth Saveka.

Costanza Bergo, #StandWithTess cofounder, Ph.D. candidate, and Student Council Equity Officer for A+D Council, said “when it became clear Tess’s job was not going to be saved, we asked what their plan was? She was pivotal to Indigenous Programs in its entirety, without her as we now know in 2020 … there is no current access to indigenous programs at A+D.”

Stand With Tess report that the University ignored emails, contact in person, and that Dean Harley was unreachable. Constanza said they realised “it was not an issue that stopped with her. It is an issue of institutional racism and labour conditions. That is how we have ended up here.”

Jack Poppert, A&D Council president and fellow co-founder, agrees that “what happened to her could not have happened if there were better employee protections.” Tess worked at UNSW for 13 years, working from temporary contracts from 2014 onwards, when Harley became Dean and implemented that Ph.Ds were a requirement for permanent contracts, regardless of preexisting work or significance to the community. Costanza asserts that this should be considered gatekeeping job security and institutional authority, “considering the history of exclusion of Indigenous people in Australia from Anglo-education institutions.”

The group also questions the priorities of the University concerning “Indigenous Portfolio”, a formal sector of the University which is meant to provide support and elevate the voices of Indigenous staff and students. Jack, while acknowledging the benefits of the 2025 Indigenous strategy, argues that UNSW’s use of the strategy in emails surrounding Tess’s dismissal is a hypocritical attempt to silence protest against their actions. Chapman has called the current UNSW climate and management of Tess’s case as one where “Aboriginal people are treated with disdain, lied about, lied to and used only for convenience and virtue signalling”.

Leilani Knight, Indigenous student, UNSW A&D Council representation officer, and supervisor of the UNSW Winter School spoke to the instant change on campus: “to hear her being forced out tore that community down.” Many students reported that they pulled out of the program as “they didn’t want to participate in a university that treated their community like that … which was heartbreaking.”  In dismissing Tess, the Indigenous community felt UNSW disregarded the importance of Indigenous people both within  the community, and the role that plays in bringing profit to the University.

Deputy-Vice Chancellor (Academic), Professor Merlin Crossley, reportedly told the Collective that, “I’m going to play the age card and let you know that you can forget things over time.” Knight said she replied that “I’m going to play the black card and tell you that this hurt doesn’t just end. It’s [part of] continuous microaggressions that Indigenous people have to deal with” and that Crossley’s belief was “tone-deaf within the ongoing trauma that is settler colonialism” upon Indigenous students losing their “matriarch and Aunty on campus.” The Collective report that Crossley seemed indifferent to their reports of Tess’s individual significance to A&D and UNSW. Jack expressed great discontent with this within the Collective, and that, “academia is the business model that relies on individuals – they are supposed to be specialists.”

Jack asserted it was important to highlight that the “price this institution has been willing to pay [in the loss of Tess] for its authoritarian pride is absurd and irresponsible.” At a #StandWithTess rally held on the 9th of November at A&D campus, a boycott of UNSW and its galleries was announced by Artist Tony Albert, proppaNOW cofounder, who has shown at galleries internationally such as the Musée d’Aquitaine, Bordeaux, France (2014); Singapore Art Museum (2013); National Museum of China, Beijing (2013); and Tel Aviv Museum of Art, Israel (2011) and his work is held in national private and public collections at the Art Gallery of New South Wales, Art Gallery of Western Australia, National Gallery of Australia. Other leading global curators and artists joined the boycott including Richard Bell, Vernon Ah Kee, Joan Ross and Adrian Stimson. Tess’s connections within the global artworld gave students at A&D unique access to workshops and events with globally recognised artists which current undergraduates will have no access to. In a first year mandatory class of the BFA, Joan Ross’s artworks are central, particularly as they challenge the effects of settler colonialism. However, it was not mentioned that the artist is currently boycotting the University for upholding those very colonial mindsets.

Costanza notes that, “[Tess’s dismissal and its management] has tremendously damaged the image of the institution both nationally and abroad. I speak to people in the UK that have heard about this.”

According to the Collective, while this directly impacts only A&D, the Kensington campus’s involvement is essential. Decentring white imperialism, decolonising the University, and Nura Gili are often discussed at Kensington, at events and on forums, but the same issues at Paddington aren’t acted on. The campuses are stronger together, but “the university wants to silo different issues because that means we can’t act together.”

They invite anyone associated with UNSW to check out the Stand with Tess Instagram to see records of this whole process, from videos of the University blacklisting members out of A&D gallery events, to the removal of posters from campus, including the extreme measure of  the only elevator to access the 4th floor being shut down for a whole day – blocking access to differently-abled people and those using mobility aids.

On the 31st of October, the Collective attended an alumni event which they believed was to take place in the courtyard. After the group indicated their presence through an Instagram story and wearing #StandWithTess t-shirts, Jack recalled, “the whole event moved into the galleries, they hired extra security at the doors and were told not to let us in …  as if the students who are advocating for indigenous education were going to act violently.” After  hiding their shirts to enter the event, Jack attempted to deliver a message to the alumni cohort and his microphone was cut off, “they literally silenced me.”

By the end of 2020, the #StandWithTess Collective expresses they would like UNSW to provide the formal apology for the trauma inflicted on Tess, Chapman, and Saveka; more accountability; and tangible change. When asked if Tess would come back if asked, the Collective said it “better be a good offer.”

Nearly a year after her dismissal, there has been no Director of Indigneous Programs since Tess. Six months later, under COVID-related restructuring, Ross Harley will no longer be the Dean of A+D; there is hope the new Dean, Professor Claire Annesley, will try and rebuild what has been lost.

The “constant light” that were Chapman’s Fridays in the printmaking room and the Aboriginal flag which always flew outside of Tess’s window is a tangible absence.

Professor Merlin Crossley has chosen not to comment at this time.

Professor Ross Harley did not respond to Tharunka’s request for comment.

Ms. Tess Allas is unable to comment on this matter.

Previous What Happens When A Fraudster Refuses To Repay Their Victims?
Next Tethered Skies